On a night with a reasonable chance of precipitation, the final home game of the season, the 2015 Delmarva Shorebirds completed a five-game sweep of the first-half division champion Hickory Crawdads. They also managed to finally crawl over the 200,000 mark in season attendance, with an all-time franchise low of 203,520 making it out to Perdue Stadium. If the original forecast had held, the team would have suffered its first sub-200,000 season.

While the statistic seems bleak, though, the truth comes out on further study. On a per-game basis, the attendance was remarkably stable between 2014 and 2015: just three fewer per game. The average of 3,230 tracks with recent performance where the team has existed in that attendance range for a decade or more.

What was lacking this year, however, was home dates. While every team in the South Atlantic League is assigned 70 home dates and 70 road games scattered throughout the year, Mother Nature can be downright uncooperative at times. The average SAL team lost four dates due to rain this year, but Delmarva had the fewest openings with 63. Just getting to league average and assuming normal attendance at each game would have made the difference between sweating out 200,000 fans or a modest uptick in attendance from last season.

One culprit for this issue is the very field the team plays on. Imagine this scenario: a weekend full of promotions is on tap, but the area gets a gullywasher Friday afternoon and another significant drenching Saturday morning. Not a drop falls during the time the games are scheduled, but two dates are lost due to “wet grounds.” That situation seems to play out in Delmarva almost every year with the field’s poor drainage and this year we indeed lost a couple games like that. This has been a sore spot for years: I love going to the games, the food is pretty good (I liked the buffalo chicken brat I finally tried at the last game, for example) and I didn’t mind the price increase for a Thirsty Thursday beer because it was larger. But if I show up on a clear evening and the game is called because we had a cloudburst earlier that day, I’m not a happy camper.

For a number of years I have had a fairly consistent list of “pans.” But about a month ago I stumbled onto an article in Ballpark Digest by Zach Spedden that detailed some very exciting changes coming to Arthur W. Perdue Stadium.

The first phase involves redoing the drainage for the entire field, literally stripping it to bare earth and starting over. It got underway just days after the final out was recorded. 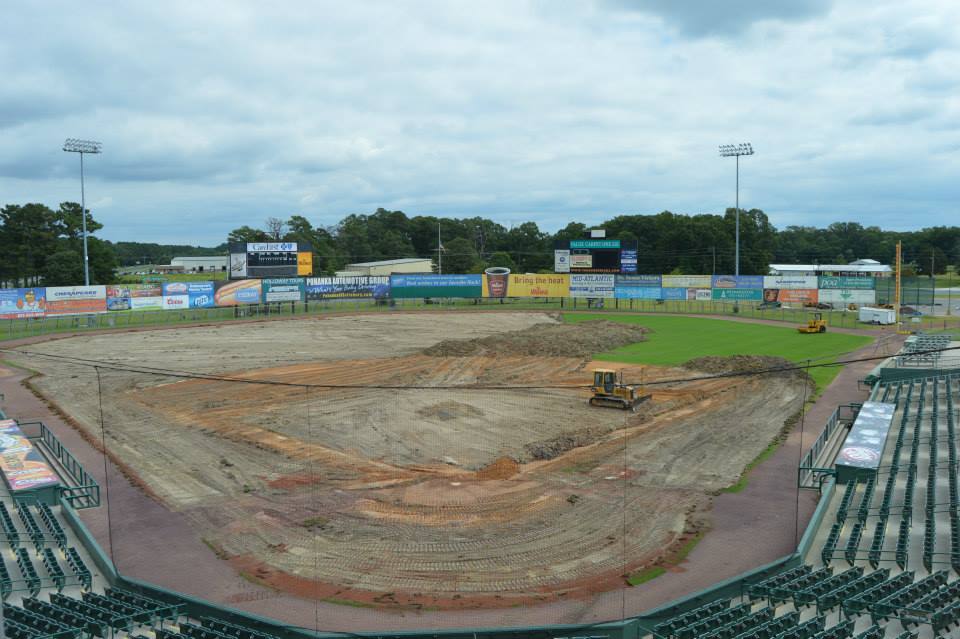 Presumably next season the field will be better able to handle an inch or two of rain in an afternoon thunderstorm, draining it away in time for the game.

But I can’t wait to see the changes slated for the 2016 offseason – which hopefully gets a late start.

Between the 2016 and 2017 seasons, the Shorebirds will make several improvements to the ballpark. In what (Shorebird General Manager Chris) Bitters called a “key piece” to the renovation, a new boardwalk-themed wraparound concourse will surround the field. New tiers will be added to the current group area down the right-field line, while the left-field side will see an increase in group and standing room options as well as slope adjustments to the current berm seating. Also in the works is a plan to remove the current metal bench-styled seating in the second level in favor of fold-down stadium seats.

The goal in making these adjustments to the berm, group, and standing areas is to give fans who prefer to wander during their visits more options, all the while making the stadium feel less congested on crowded nights. “That’s going to be a huge hit, particularly on our busier nights,” said Bitters. “When we are full now, people are hanging out on the concourse,” reflecting a demand for more comfortable standing room.

One of the most crucial aspects of this phase of the renovation will be a brand new videoboard. Perdue Stadium has used the same videoboard since opening in 1996, which, according to Bitters, limits what the Shorebirds can do from a promotional standpoint. With a more modern board, he said that fans can expect better animations, more interactive promotions, and instant replays as part of a more modern experience. “For our fans, having seen those at Camden Yards and other ballparks, they kind of have come to expect that stuff.”

Now THAT will be worth following on Facebook. Its net effect may be similar to FirstEnergy Park in Lakewood, which also has a 360 degree concourse. If it’s made wide enough, there could be cafe-style seating out there, giving casual fans the option to scope out the action behind the center fielder while enjoying a bite to eat and adult beverage.

And maybe – just maybe – we can get back to what Thirsty Thursdays once were, with the game followed by an hourlong concert by a local/regional band. Those were great!

Naturally, all this would come at a price. I’m not privy to any inside information, but the question to me is not if but when ticket prices and parking fees go up. The limited-government conservative in me is already a little perturbed that the taxpayer piggy bank was raided to pay for this – hopefully we get the extra tax revenue from increased attendance and interest to make it a zero-sum game. $4 million may not seem like a lot, but if ticket prices went up $1 it would take well over a decade to pay for itself through that avenue, not counting interest. It seems to me, though, that the county was looking for more of a buy-in from 7th Inning Stretch LLC, the team’s owner. (Like a number of other facilities, a privately-owned team plays in a publicly-owned stadium. Wicomico County owns Perdue Stadium.)

So the pieces are being put into place: a new long-term agreement between the team and county, improvements to Perdue Stadium to satisfy both the Orioles and the fans, and a likely continuation of their longstanding player development contract when it comes up for renewal next season.

Soon the only thing I might be able to pan would be the Orioles’ scouting staff. With the proposed facility improvements, all that’s missing is another trophy to go with the two gathering dust after 15 and 18 years, respectively. Playoff baseball has been AWOL from Perdue since 2005, and that’s way too long.