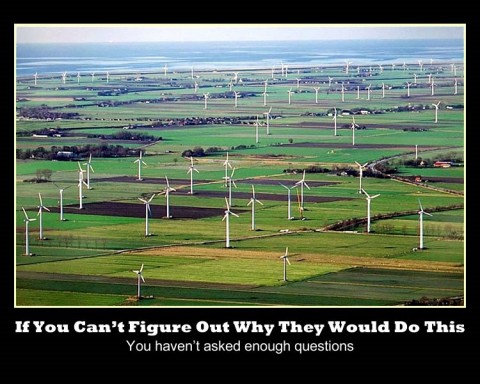 Last month’s wind-turbine fire near Palm Springs, CA, that dropped burning debris on the barren ground below, serves as a reminder of just one of the many reasons why people don’t want to live near the towering steel structures. In this case, no one was hurt as the motor fire was in a remote, unincorporated area of Palm Springs. But imagine if it was located just hundreds of feet from your back door – as they are in many locations – and the burning debris was raining down into your yard where your children were playing or onto your roof while you are sleeping.

Other reasons no one wants them nearby include the health impacts. Last month, Dave Langrud, of Alden, MN, sent a six-page, detailed complaint to the Minnesota Public Regulatory Commission. In it, he states: “Wisconsin Power and Light constructed the Bent Tree Wind Farm surrounding my home. There are 19 turbines within one mile and 5 within ½ mile. Both my wife and I have had difficulty sleeping in our home since the turbines started operating. If we leave the area, we don’t have this problem. The turbines have also caused severe headaches for my wife. She didn’t have this problem before the turbines, and this isn’t a problem for her when we spend time away from our home and away from the turbines. When we are home, the problems return.”

In response to another recent ongoing complaints at multiple Minnesota wind projects about the proximity of the turbines to residences, commissioners from the Minnesota Department of Health, Department of Commerce, and Pollution Control Agency acknowledged that regarding permitting and setbacks, “the noise standard was not promulgated with wind turbine-like noise in mind. It addresses audible noise, not infrasound. As such, it is not a perfect measure to use in determining noise-related set-backs between wind turbines and residences.” Yet, it is the “measure” that is used. The Commissioners also acknowledged: “At present there is no available funding to conduct such studies.”

Langrud’s letter addresses property values. He asks: “How do we get a fair price if we sell in order to save our health?” But recent studies prove that it isn’t just those forced to live in the shadows of the turbines whose property values are diminished. Waterfront properties that have offshore wind turbines in their viewshed would have a “big impact on coastal tourism,” according to a study from North Carolina State University. The April 2016 report in Science Daily states: “if turbines are built close to shore, most people said they would choose a different vacation location where they wouldn’t have to see turbines.” The economic impact to the coastal communities is estimated to be “$31 million dollars over 20 years.”

A similar study done in Henderson, NY, found a proposed wind project could have “a total loss in property value of up to about $40 million because of the view of turbines.” An interesting feature of the NY study, not addressed in the NC one is how the loss in property taxes, due to reduced values, will be made up. The Watertown Daily Times points out that most of the homes whose values “would fall sharply due to the view of turbines” are “assessed above $1 million.” It states: “homes in the $200,000 range without a view of turbines would probably see an increase in property taxes to make up for the overall drop in property values.” Robert E. Ashodian, a local resident is quoted as saying: “If property values go down and the town isn’t going to spend less money, the tax rate is going to go significantly up for all of the homeowners who aren’t impacted.” Henderson Supervisor John J. Calkin expressed concern over the “devastating impact” the wind project would have on the town and school district.

Offshore wind turbines were supposed to offer a visual benefit, but they, obviously, bring their own set of problems.

The Financial Times reports: “Building wind farms out at sea, rather than on land where critics say they are an eyesore, has made these power stations a less contentious form of clean energy … But it also makes them dearer than most other power stations and many EU governments face pressure to cut green subsidies that opponents say raise electricity prices and make some industries uncompetitive.” The higher cost argument is what has caused Denmark – known as the international poster child for green energy and the first to venture into offshore wind power – to abandon the policies that subsidized the turbines. Cancelling the coastal wind turbines is said to “save the country around 7 billion Krones ($1 billion).” According to Bloomberg: “The center-right government of [Prime Minister] Lars Loekke Rasmussen wants to scrap an electricity tax that has helped subsidize wind turbines since 1998.” The Danish People’s Party, the largest group in the ruling bloc, is part of the “policy about-face.” Party leader Kristian Thulesen Dahl says: “You have to remember this is a billion-figure cost that we’re passing on to the Danes.” She added: “We also have a responsibility to discuss the costs we impose on Danes over the next 10 years.”

Germany is facing similar problems with its green energy policies. Energy Digital magazine points out that Germany’s rapid expansion of green energy has “driven up electricity costs and placed a strain on the grid.” As a result, Germany has capped wind power expansion. In fact, subsidies – which drove the growth in renewable energy – are being cut throughout Europe. Bloomberg states: “Europe is falling out of love with renewables.”

Then, there are the U.S. utility companies who are forced to buy the more expensive wind-generated electricity due to an abused – but little known in the public – 1978 law that was intended to help the U.S. renewable energy industry get on its feet. The Public Utility Regulatory Policies Act (PURPA) was designed to give smaller power players an entry into the market. If wind-turbine projects meet the guidelines, utilities must buy the electricity generated at “often above-market” costs. Instead, in many cases, big projects, owned by one company, get divided up into different parcels with unique project names, but are still owned by the major developer. Energy Biz magazine reports: “PacifiCorp, for one, estimates that such abuses will cost its customers up to $1.1 billion in the coming decade by locking the company into unneeded electricity contracts at rates up to 43-percent higher than market price.” It quotes John Rainbolt, federal affairs chief for Wisconsin-based Alliant Energy: “Our customers essentially pay for PURPA power at 20-percent higher-than-market-based wind prices.” Led by Senator Lisa Murkowski (R-AK), Rep. Fred Upton (R-MI) and Rep. Ed Whitfield (R-KY) a move is underway in Congress to review the nearly 40-year old legislation.

So, residents who live near wind turbines don’t want wind turbines. Nor do residents and renters who have them in the viewshed, governments looking to cut costs, utility companies, or ratepayers. And we haven’t even mentioned those who want to protect birds and bats. Scientific American just addressed the concern that “Bat killings by wind energy turbines continue.” It claims: “wind turbines are, by far, the largest cause of bat mortality around the world” and this includes three species of bats listed – or being considered for listing – under the Endangered Species Act. Bats are important because they eat insects and, therefore, save farmers billions of dollars in pest control each year. Scientific American reports that in addition to dead hawks and eagles found under the wind turbines are thousands of bats.

Who does want wind turbines?

Wind turbine manufacturers, the American Wind Energy Association, and the crony capitalists who benefit from the tax breaks and subsidies – which Robert Bryce, author of Power Hungry and Smaller Faster Lighter Denser Cheaper, reports total more than $176 billion “given to the biggest players in U.S. wind industry.” He states that the growth in wind energy capacity has “not been fueled by consumer demand, but by billions of dollars’ worth of taxpayer money.” To address those who defend rent-seeking wind turbines and squawk about the favorable tax treatment the oil and gas sector gets, Bryce points out: “on an energy equivalent basis, wind energy’s subsidy is nearly three times the current market prices of natural gas.” Even billionaire Warren Buffett acknowledged that the only reason his companies are in the wind business is: “We get a tax credit if we build a lot of wind farms.”

If no one but the rent-seeking crony capitalists want wind turbines, why must people like Minnesota’s Langrud have to endure them? Because the wind energy lobby is powerful and “green energy” sounded good decades ago when the pro green-energy policies like PURPA were enacted. However, as the Bloomberg story on Demark points out: wind power is “a mature industry that no longer needs state aid.” Unfortunately, in December 2015, Congress extended the wind energy tax credits through 2021. But tweaks, such as reforming PURPA, can take place and a new president could totally change the energy emphasis – which would be good, because, it seems, no one really wants wind turbines.

The author of Energy Freedom, Marita Noon serves as the executive director for Energy Makes America Great Inc., and the companion educational organization, the Citizens’ Alliance for Responsible Energy (CARE). She hosts a weekly radio program: America’s Voice for Energy – which expands on the content of her weekly column. Follow her @EnergyRabbit.