Deliver those who are drawn toward death,
And hold back those stumbling to the slaughter.

If you say, “Surely we did not know this,”
Does not He who weighs the hearts consider it?

He who keeps your soul, does He not know it?
And will He not render to each man according to his deeds?

On Saturday, October 10, 2015, over 20,000 protestors turned out at 290 Planned Parenthood facilities across the nation to protest the selling of baby parts for profit. The protestors were against abortion, but were highlighting the gruesome practice of harvesting baby organs to sell for research. The availability of large numbers of aborted babies at Planned Parenthood facilities make for a profitable secondary business of supplying fetal organs and tissue to researchers, including the National Institutes of Health.

Although this is not a new phenomenon, it was brought to public attention by the videos released by the Center for Medical Progress, which led to Congressional investigations and the call to defund Planned Parenthood. So far, Congress has been unsuccessful in their quest to defund Planned Parenthood. Citizens are continuing to protest to keep the pressure on Congress to act.

This issue contributed to the resignation of Speaker John Boehner and it continues to reverberate in DC as hearings drag on and there is an effort to use reconciliation to force a bill through to the president’s desk. President Obama has said that he will veto any bill that defunds Planned Parenthood, and there are not the votes in the Senate to override a veto. This has led to talks of a government shutdown if the House refuses to fund the government over this issue.

Please note that it is the President that will shut the government down by refusing to accept the bill that the House sent to him, because he wants PP funded.

The new Speaker will have to face this problem right away as the continuing resolution (CR) that was passed under John Boehner will expire in December. We are heading towards a showdown anyway, because the President has indicated that he will not accept another CR.

We have not had a budget passed in years. The government has been lurching along on CR after CR. The President is in a rush to spend more and is chaffing under sequestration. The House needs a Speaker that will hold the line on spending, including a government shutdown if that is what it takes.

So, while the 20,000 protestors across the nation were protesting abortion and fetal tissue harvesting for profit, they were also part of the struggle between government factions. We cannot say the struggle is between Republicans and Democrats, because that is not the case. This is a struggle between Republicans that defend life and conservative values and Republicans that are working with the Democrats as part of the elites that rule over us.

The Democrats are united in their totalitarian quest to rule over us. They use their technique of dividing people into victim minority groups that pay allegiance to them for taking care of them to control and manipulate their followers.

The Republicans have not been able to consolidate the control of their base sufficiently to shut down all opposition. The conservative faction, while not the majority, is still large enough to bring down the Speaker and to cause occasional upsets like with the amnesty issue. The Chamber of Commerce funded, crony capitalist GOP faction despises the conservative base, but cannot quite break free yet.

Over and above the political factions are the media who decide what to report or not report. If you hold a protest and nobody reports on it, then did it really happen?

Here are pictures of the protest in Easton. 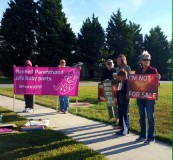 Almost all of the forty-four participants came to the first protest on August 22 and returned because they are convicted by the knowledge that babies are being sacrificed for human convenience and profit. We stood on the sidewalk with our signs and prayed for the abortionists and staff that work at the facility and the women that come for abortions to have a change of heart. The clinic was not open on Saturday, so we did not see any workers or clients.

Despite our peaceful gathering, many people think of pro-life activists as wild-eyed dangerous crazies because of the media’s depictions, which frequently tar all pro-lifers as doctor killers and abortion clinic bombers.

This Washington Post article reports that
a charter school was concerned when a PP facility was going to be located next to them. “Many parents worry that they will have to explain graphic images of aborted fetuses and the ideological underpinnings of one of the country’s most contentious debates to their young children,” wrote reporter Michael Alison Chandler.

Actually, at the first protest in Easton on August 22, that is exactly what happened. The pediatric clinic next to the PP facility was open during the protest. The pediatricians came out to complain that our signs were scaring their patients. We did not have any graphic photos, but they complained about a sign that said, “Abortion kills babies.” I mentioned to the pediatrician that we were trying to save babies so that they would have more patients. He shamefacedly acknowledged that we were pleading for babies to be spared a gruesome death.

A final nod to the uneven playing field that pro-life protestors face is the reality that big money is deployed against them. Planned Parenthood is a “non-profit” which pays it president, Cecile Richards, a salary of $590,000. Planned Parenthood receives over a half billion dollars in federal funding as well as millions more in state funding.

According to the Free Beacon, “Planned Parenthood has supported the Democratic party in the past. It poured $18 million into outside spending groups in 2014 and 2012, according to the Center for Responsive Politics. Most of its nearly $6 million in direct contributions since 1990 have gone to Democrats. Every Democratic candidate except for (Jim) Webb has benefitted from this cash influx at the federal level. (Bernie) Sanders and (Lincoln) Chafee have received nearly $25,000 combined over the course of their careers.”

How much of our tax dollars are being used against us to buy the politicians’ protection? This is the typical cycle of the tax dollars funding an organization that then donates exclusively to the Democrat party to protect them.

Interestingly enough, this runs in the family. Cecile Richards is married to Kirk Adams, who just stepped down as Executive Vice President of the Service Employees International Union, SEIU. His last reported salary was only $229,880, so his wife was out earning him by a significant amount. More importantly, in the last presidential election, the Wall Street Journal reported that the SEIU donated over $70 million to Democrat candidates and knocked on millions of doors campaigning for them.

This, then, is a David vs. Goliath battle. The ordinary Americans that are calling for an end to the merciless killing of our smallest citizens are fighting against a taxpayer funded giant organization that pays protection money to our leaders.