This commercial ought to do the trick:

And if you want more hard-hitting truth, this site places it right in the name: Kratovil IS O’Malley! 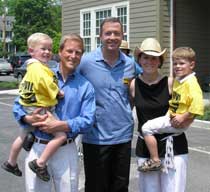 It sure looks like Martin and Frank are best buds here. This is from the Kratovil newsletter, November 28, 2007.

“Frank is dedicated, tenacious and energetic and he will make a great Congressman.”
Martin O’Malley, MD Governor

Great for raising taxes? Given the backdrop, this picture likely was taken even earlier in the year.

And whatever happened to this approach? This comes from newsletter number 2, December 19, 2007:

“Democratic candidate Frank Kratovil, the State’s Attorney for Queen Anne’s County, said he was focused on promoting a positive, issues-oriented message. ‘Voters want to know how you are different,’ said Kratovil, 39, a first-time candidate for U.S. Congress. For Kratovil, a Democrat running in a moderately conservative district, that means emphasizing his twelve-year-career as a prosecutor.”

Hey, when Andy Harris pointed out Frank’s career as a prosecutor, he went whining to his cohorts instead of answering the questions. And Kratovil may have figured even then that the DCCC could be the ones who do the negative ads.

And just days later, where was Frank?

And you know how Frank was trying to look a little more moderate? How about this one?

If elected, Kratovil emphasized that he would focus on a number of areas, including helping the United States achieve universal health care, and bringing an end to the war in Iraq.

Finally, it may be good to bear in mind the following, from another newsletter:

“As Kratovil explained, this is not an Eastern Shore versus Western Shore election because the winner of the election needs to represent the entire district.”

Yet how many of his sycophants think the Eastern Shore needs to be represented by someone who lives there? (Such that he does, when you figure Stevensville is a stone’s throw from the Bay Bridge.) I’m sure all of the counties in the district would like the Congressman to hail from there and the fact is, prior to Wayne Gilchrest, the district was represented by someone on the Western Shore.

And you know those people who want to pit this as an O’Malley vs. Ehrlich tilt and note who won the 2006 election? Just try these numbers on for size, and check out just who won every county in the First Congressional District. I’d take those numbers any day of the week – maybe that’s why Frank Kratovil ran away as fast as he could from Martin O’Malley once the primary was over.

I’ve seen a lot of Democrats in my day – remember where I was born and raised. Frank Kratovil is the same as 95% of the rest. He’ll come campaigning and saying just how centrist he is then go to Washington and vote to tax you more, spend more money, and create lots of work for government bureaucrats. While there’s quite a few Republicans who exhibit a lot of those same traits, I don’t take Andy Harris for one of those because I’ve examined his voting record and he stands on principle, not politics.

Recently I wrote a letter to the Annapolis Capital after they unwisely endorsed Frank Kratovil. I don’t think it ever was published and I’ve given them a week or so to do it, so I’ll go ahead and place it here now.

It appears your October 23rd endorsement of Frank Kratovil for the First Congressional District seat is based on two factors: the happy accident of Mr. Kratovil relocating just a stone’s throw across the Bay Bridge to practice and bide his time before running for political office and, on the other hand, your attribution of “lone wolf” status to Andy Harris for a few selected Maryland Senate votes.

In their debate at Cecil College, Kratovil is quoted as saying about Harris, “What people wanna do is say what people want to hear.” On the contrary, it’s Frank Kratovil who has practiced political expediency from the beginning of his campaign. For one example, once Kratovil secured the Democratic nomination it was clear that the endorsement from Martin O’Malley wouldn’t serve him well in the general election so it was under the bus for the Governor. Joining O’Malley beneath the wheels was any public mention of his party affiliation because he now bills himself as an “independent” – yet Frank’s not independent enough to refuse nearly $2 million of campaign cash from Democrats inside the Beltway.

Conversely, you describe Harris as, “bright, engaging and knowledgeable about national issues,” but feel Andy wouldn’t be a “consensus-builder.” If building a consensus is about selling out your principles for short-term political gain, then we’re poorly served as a district and as a nation. Andy Harris has consistently shown that he stands for smaller, less intrusive government that leaves more money in the pockets of all citizens, not just those deemed to deserve it because of their income status.

You’ve endorsed a “finger to the wind” politician, I’m supporting a man who has a solid core set of beliefs and will stand up for what is right. The First District needs Andy Harris in Congress.

And I stand by that statement, so I’ll be out on Tuesday (and maybe even before that depending on how my weekend goes) trying to place a REAL Congressman in Washington, not some dimestore phony who will change his positions with the wind (and drop unpopular politicians when it’s politically expedient. By the way, before you say it, President Bush endorsed Wayne Gilchrest in the primary, not Andy Harris.)

On Tuesday or whenever you send in your absentee ballot prior to then, vote for Andy Harris.

By the way, if you folks on the left are mad now, wait ’til you see the subject of my next post.