In what is hopefully a precursor to next month’s Wicomico County Republican Straw Poll, we had a full room tonight to hear our Congressman, Wayne Gilchrest, speak. But judging from the fact that I was the only “media” person present (with the possible exception of Kathy Bassett) I suppose the story of the event will come from monoblogue.

I do have to say that tonight’s meeting was the first one I ever attended with a protestor: 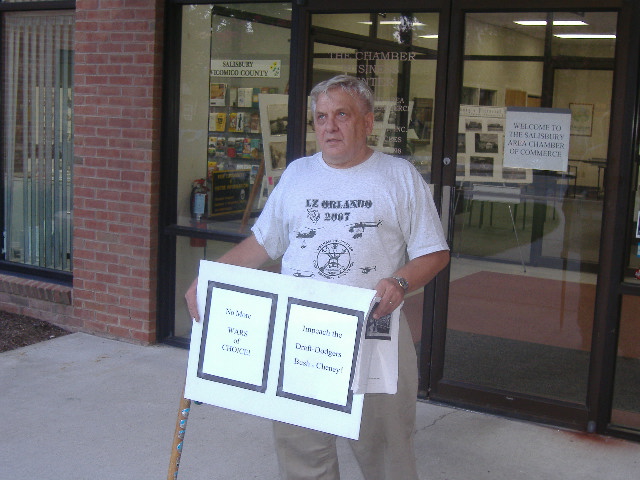 I don’t know if the Congressman gave him an audience, but I do know that one attending inside and paying rapt attention as well was Dustin Mills from the Andy Harris campaign. Thus there were a few calling cards left behind. 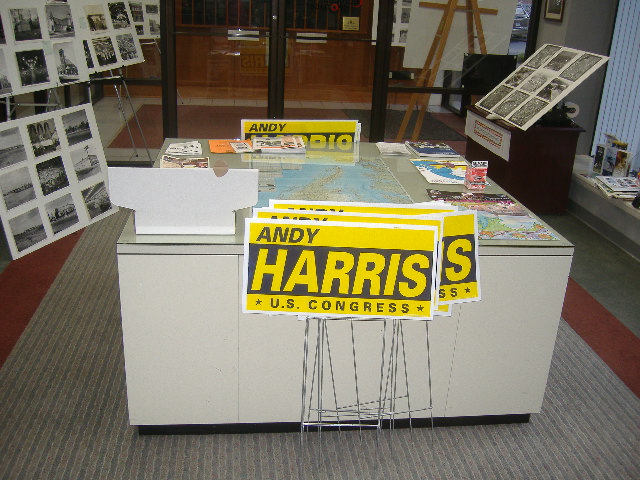 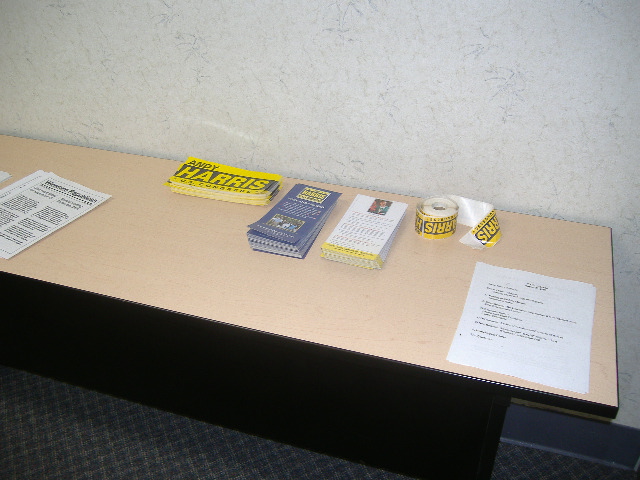 What may have impressed us most is that Gilchrest was there just about the time we got underway, so we only had time to do the Lord’s Prayer, Pledge of Allegiance, and a runthrough of June’s meeting minutes before Gilchrest spoke. 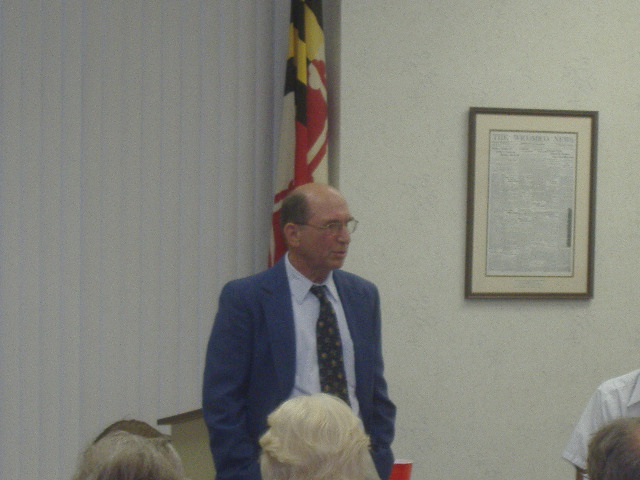 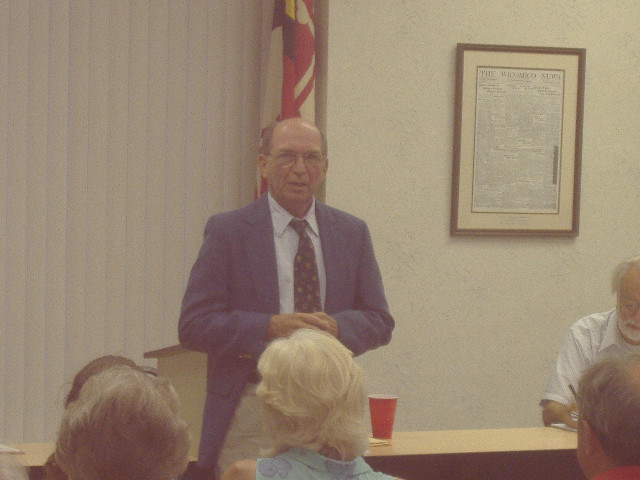 Wayne wanted to talk about three subjects and ideally planned on devoting 10 minutes to his remarks and 40 minutes to answering questions. I think it was more like a 20 to 30 ratio as he spent a good deal of his remarks speaking on the Iraqi situation.

He started out however by discussing energy independence. Citing that the goal of Congress was to be energy independent within 20 years, he stated that the United States had already reached its peak of oil production back in 1970 and the worldwide oil situation was similar, with production expected to peak in the next decade or two. For that reason he was supportive of a bill that passed which looked for alternatives to oil and coal. (I believe he’s referring to this session’s HR 6, which he voted for in January.)

On immigration, the Congressman said that it was a “volatile, huge issue not easily solved with one piece of legislation.” On this occasion and several others while answering questions, he noted that the House had twice passed measures relating to border security but they died in the Senate. It was President Bush’s idea to combine a lot of different reforms into one omnibus bill (the one recently debated in the Senate) rather than a more incremental approach, with separate parts focusing on:

But the bulk of his initial remarks talked about, as he put it, “what I know about Iraq.”

He began with recounting some of what we all know: after the 9/11 attacks, we retailiated first against the Taliban regime in Afghanistan. While there has been some success, he did say that it’s “not like how we would want it” there.

Then Gilchrest told us about some of the other players in the region, describing Syria as a secular Islamic nation, but one that is not allied with us whereas Saudi Arabia, a nation we consider an ally, is very fundamentalist – in fact, the Saudi brand of Islam is illegal to practice in Syria. And while Iran gets a bad rap about being on the fundamentalist side, it is more religiously liberal than the Taliban was. Further, Gilchrest said we’d done both Iran and Syria a favor by getting rid of the Saddam regime.

But the mistakes he cited were many. First of all, Gilchrest alleged that the military brass in the Pentagon (as opposed to the civilian side) did not want to invade Iraq, and when forced to come up with a plan they thought 500,000 troops would be needed. At the moment we have 160,000 troops and 100,000 civilian contractors doing some military tasks, continued the Congressman.

Another error was disbanding the military and civil service because they were Ba’ath Party members and thought to be likely Saddam loyalists. So security and governance at the start was nonexistent. In his eyes, the problem in Iraq was both “political and cultural” and asserted that Iraq’s neighbors wanted there to be no instability in the region.

So, he asked rhetorically, how do we create a stable Iraq and a stable region? First of all, he stressed that no bill he’d voted for mandated a pullout date for our troops in Iraq. The bills only were to express the “sense of the Congress” and carried no weight as far as the number of troops was concerned. Gilchrest noted the current Secretary of Defense, Robert Gates, has quietly begun putting elements of the Iraq Study Group report he (Gates) coauthored into place, including conversations with Iraq and Syria. Unfortunately, Gilchrest opined that Iraqi Prime Minister al-Maliki has not resolved the reconciliation issues in his own country as of yet.

Summing up his position, Gilchrest called for a policy of “strategic patience”, a process that included “conversations” with Iraq and Syria, implementing the idea floated by Virginia Sen. John Warner and beginning the “process” of withdrawal (but maintaining some military presence) and following through on other ISG recommendations. Gilchrest closed this part of the remarks by noting we can’t win with just the military. In his words, as a former grunt Marine, he’d rather see people talk than shoot to solve the problems.

To close on the Middle East topic, Gilchrest asserted that he was told in a briefing that there were no WMD’s transported to Syria (contradicting allegations made by an Iraqi general, Georges Sada) and also that he felt some of the troubles in the Middle East (such as Syria vs. Lebanon) originate from border disputes simmering since the days of the Ottoman Empire.

I also found it interesting that Wayne felt Iran was “quite a few years away” from having nuclear weapons. Conversely though the topic of almost all of the questions he took was not his Iraqi stance, but immigration.

To the group that was the hot-button issue. It gave Wayne a chance to rehash some of the things he’d already mentioned, although he added that amnesty was now “off the table” and steps were being taken by President Bush to crack down on so-called “sanctuary cities.” Another question that came up was why we didn’t help the home countries of illegals, and the Congressman answered that some of the strife and volatility in Latin America discouraged the investment needed to help those economies.

Gilchrest did step in it at one point in the conversation. Talking about foreign workers, he stated that employers like Mexican workers because they ”show up every day” and are hard workers. After having it pointed out to him that the statement could be construed as a knock on American workers he quickly apologized and stated he shouldn’t have said such a generalization in his remarks. (However, being in a related industry I know that it is part of the reason a lot of Mexicans get hired – they are on jobsites literally sunup to sundown and beyond. That doesn’t make hiring illegals right, though.)

On the whole, he got a reasonably positive reaction from those that were in attendance. I do have some comments to make regarding his stance on Iraq and the Long War, but for this exercise I’ll stay strictly “just the facts ma’am” and expound on my thoughts in a later post.

And that was most of the meeting as Wayne spoke for just under an hour all told, being scheduled to head out at 8:30. We did do some business afterward, though and I’ll touch on it briefly.

Obviously, our upcoming Crab Feast (September 15th) needs helpers and items to be donated to the silent auction. I donated one tonight. We also need staff to man our booth at the upcoming RiverFest on September 8th and longer-range at the Autumn Wine Festival in October. In other business, we distributed some proposed revisions to our club’s bylaws which should bring them a little more in line with the state GOP’s.

We also had a short discussion about getting behind the state adopting what are called “transparency laws”, which 19 states have adopted in an effort to allow the public a better glimpse at how their state spends their tax money. Unfortunately with the current O’Malley regime and his toadies in the General Assembly, the chances of that passing are slim and none – and Slim just left town. But we can always press as the minority party (for now.)

Obviously I didn’t write this down in my notes but I also discussed our next meeting, which is a special meeting for the Wicomico County Republican Straw Poll. Hopefully I’ll fill that room up twice as much for the event and I’m working on getting help in one way or another from the nine major GOP candidates.

There was one sad note though. For the first time in many moons, we actually lost a slight bit of ground to the Democrats in terms of registration. Guess it means I have more work to do in order to make that a one-time blip on the radar. We are the true majority in Wicomico County (based on recent election results) so we’ll change our strategy where required to gain those voters back.