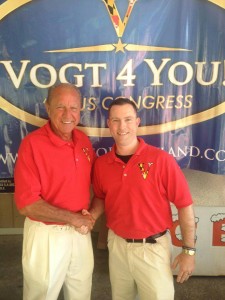 I don’t know about you, but I like the looks of that.

What he described as “probably the worst kept secret” in Maryland politics was confirmed by Dan at the state Young Republican convention over the weekend. This came after the story broke at The Quinton Report and The Red White Blue on Wednesday, but the rumor began to spread a day or two earlier.

So the question becomes: what is he up against?

Well, at the state level no one has officially filed for the Sixth District Congressional seat. But FEC records show one current challenger in David Vogt, who is a Republican but has not shown any financial activity as of yet. (Alex Mooney is also on this list, but we know he’s departed the state.)

Meanwhile, incumbent John Delaney filed an amended first quarter FEC report which showed his financial situation wasn’t as strong as one might think: only $43,094 cash on hand and $638,675 in debts owed mainly to himself ($573,250 – including $160,000 incurred after the election, in December) but also to three other persons/entities: fundraising consultant Barbara Kaltenbach, campaign manager Justin Schall, and political consulting firm SKD Knickerbocker. So one could argue Delaney’s not paying his bills, which is sort of amazing when you consider the $69,500 in special interest money he collected over the first three months of the year.

Even Bongino’s cash on hand from his defunct Senate campaign at the end of 2012 was more than Delaney has now: $58,813 remained in his coffers at that point, although it’s likely much of it was spent getting the Cede No Ground PAC off the ground.

Certainly the situation of Dan’s entrance to the race, considering that he lives in Severna Park – well away from the Sixth District boundaries – is tempered by the fact that Delaney doesn’t live in the district, either. Granted, he’s less than a mile outside the lines but I have it on good authority that the property Dan alluded to in the Post story is very deep inside the Sixth District. Residency questions would not be a problem, and it would be almost impossible to gerrymander him out next time without a LOT of work.

And as I noted before in my previous speculation on the race, Dan carried the rural parts of the district over Ben Cardin while Roscoe Bartlett only carried Garrett and Allegany counties, somehow losing in Washington County. (Bartlett also lost badly in the portions of Frederick and Montgomery counties cherrypicked for the new Sixth District.) For all the talk about how much Montgomery County influenced the district, this is only a D + 4 district and 2014 will not be a Presidential year. I’m certain he broke this down by precinct, as I alluded to before.

So is a Bongino Congressional run worth the effort? Obviously he thinks so, otherwise he would have stayed in the race for governor, which was one he said he thought he could win. Moreover, with this being an election year for the Maryland General Assembly, there won’t be nearly as many Republicans who consider the idea of dabbling in a Congressional race knowing they have their seat to fall back upon. (I also reported LeRoy Myers may run for Congress, but some have also speculated Myers may run for a local seat in Allegany County instead. He announced last month he wouldn’t seek another term in Annapolis.)

If this is so, the field is relatively clear for Bongino insofar as the GOP nod goes. Because it’s not such a safe Republican district, winning the GOP primary is no longer a ticket to Congress as it was, which will also decrease the number of serious challengers.

On balance, this seems like a politically savvy move; one which would serve the heartland of Western Maryland well if Bongino wins.