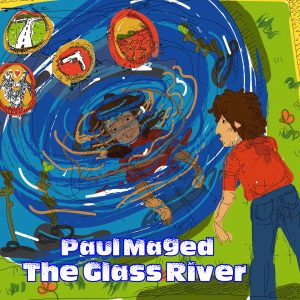 If there’s one thing to say about Paul Maged in a non-musical sense, it would be his shrewd marketing ability. Why have one post here about his latest album when he can release it as a trilogy of EPs and make it three, spaced over a period of months?

All kidding aside, the extended timeframe of his release is evident in his body of work: in this case, the five songs (and one prelude, presumably for a song to be featured on the future third portion of the trilogy) have what I’ve come to regard as a classic Paul Maged sound: most reminiscent of Billy Joel, but not completely derivative of that musical subgenre.

What sticks out to me about “The Glass River.” though, is a sort of (barely) controlled anger and passion about the world today, taken from a perspective well left of the political center. As someone looking at it from the political polar opposite, I look at it this way: I lived through the 1980s, when most popular music stood in varying degrees of opposition to the policies (real and imagined) of President Reagan that I supported as a much younger man. To me, good music is still good music – I don’t have to agree with the message or intent. So I can listen to Gunz 4 Hire and enjoy the frenetic, hard rock pace of a straight-ahead song with fun tempo changes that, in a more musically attuned world, would find a place on the rock charts.

On the other hand, the piano-driven Corporate Hell (The Legend of Tooly McDouche) truly is what it is. If you’re wondering about Tooly McDouche, you’ll pick it up when you watch the video. (Maged claims this is a “first hand account” of working in corporate America – I just hope the end segment isn’t part of that reality.)

After that strong opening, the EP slows down with the final three full-length songs. Choices is a more adult contemporary song that would almost qualify as a power ballad. On the other hand, The Glass River (The Ballad of Alan & Jane) is less of a ballad and more of a good story song with biting commentary on the strained status of relationships. (The Alan and Jane in question, though, are Paul’s parents, which makes this an even better song.)

The undercurrent of politics returns in the last full-length song, For The Sea. (See what I did there?) It has the same feel and passion to it as the remake of Like A Stone from the first part of the trilogy I reviewed at the tail end of last year. It’s the last full-length song because the sixth and final track, Life Goes By (Prelude) is, indeed, a 68-second sample of a track that I presume will be on part three. Life Goes By will be a solid addition, based on the taste of it we get.

(And again, we see the marketing expertise: who else would use a song as a cliffhanger for the next part? “Always leave ’em wanting more.”)

I don’t know what else I will hear between now and then, but if Paul can follow this up in part three he may have another winner on his hands come the end of the year. But I’ll let you be the judge (if you don’t mind the corporate influence of Spotify) and listen for yourself. Paul Maged may be the hardest working marketer in show biz right now, but he can back it up with good music.