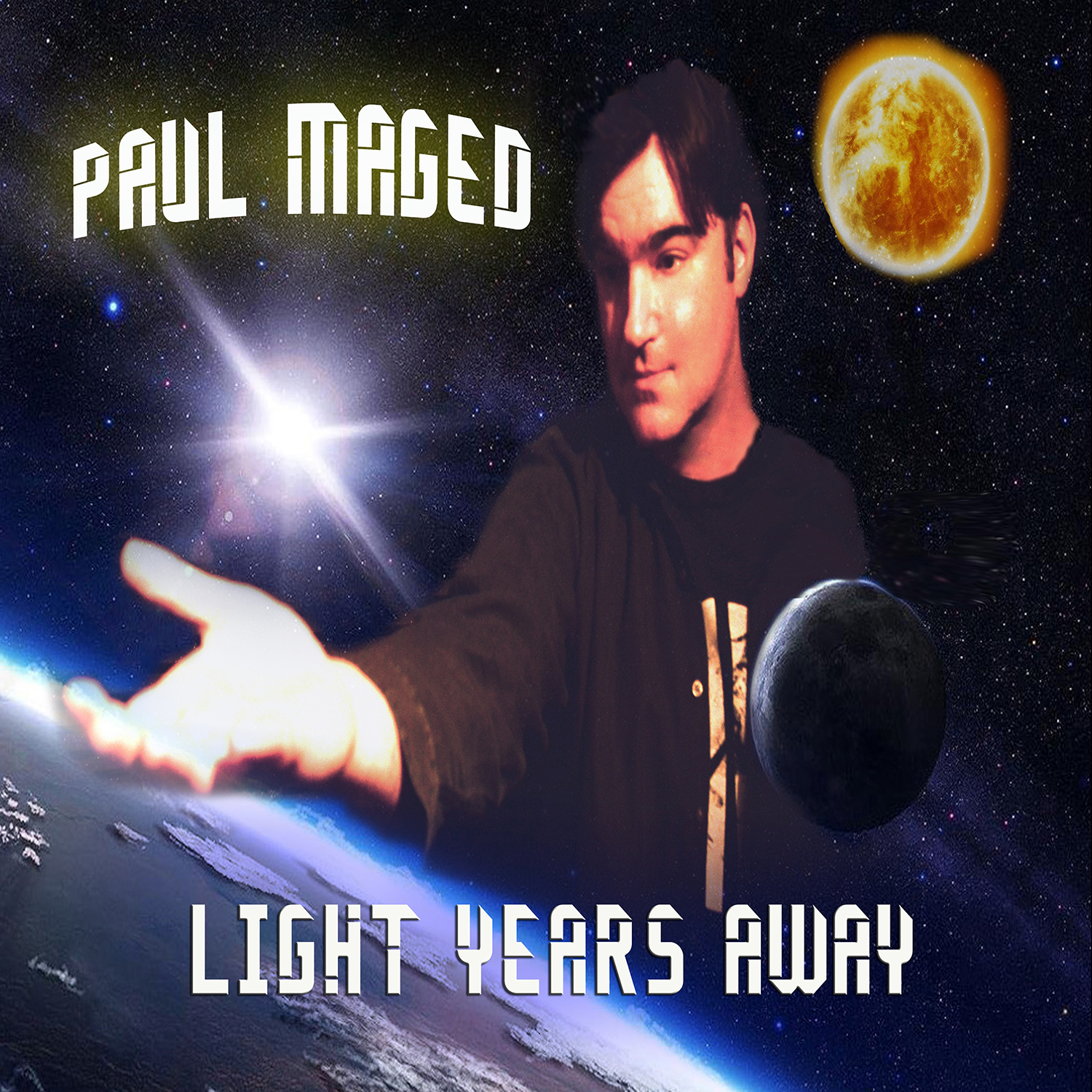 I have been doing music reviews for about 3 1/2 years now and I thought originally this would mark a first: the first time I’ve reviewed the follow-up to one of my #1 albums from a particular year and it had a shot to be back-to-back #1’s. You probably remember that Paul’s last full-length “Diamonds & Demons” impressed me enough to be my top album reviewed in 2014, and I was led to believe that a Maged single I reviewed last March called The Wild was a prelude to this new work.

So I was a bit disappointed in two respects with “Light Years Away” but heartened in another. First was the fact that I opened the website where I listen to music for my review and found only seven songs there, which as a whole went off on some tangents I wasn’t quite expecting from the earlier work. (It’s one of those things that’s a bit jarring at first listen but oftentimes grows on you as you adjust.) But then I learned the reason there were only six full-length songs (the seventh is a reprise of a portion of the song Moment of Strength) is that this release is part of a planned trilogy that will comprise the three legs of his follow-up to “Diamonds & Demons.” That means I get another 10 to 12 songs, give or take, to judge this album by before I see whether it will be a number one release next year. (By the way, that approach is not unprecedented: the album Maged barely edged out for top honors in 2014 was put together the exact same way.)

So what is there to like about “Light Years Away”? I think Paul makes a great first impression with the humorous but radio-friendly PC Police. All he needs is a lyric video because I suspect some people may find the song laugh-out-loud funny. (Considering Paul’s background in stand-up and sketch comedy, it’s no stretch to figure out he can write humorous lyrics – and the riff of the song is pretty good, too.)

In that same musical vein – maybe a touch more on the heavy side – but with less controversial lyrics is the title track of the EP, which is the third song. Placed in between is the aforementioned Moment of Strength, which flows through several shades of a rock/funk fusion which I later read Paul described as “Billy Joel meets The Killers meets Michael Jackson.” I can buy that – in fact, the bridge with the female background vocals seems a little too derivative of the King of Pop – but they sometimes seem to meet in the most unusual ways and tempo changes. This tune is one which may grow on you, though.

Song number four represents one of those significant tangents I warned you about. When I first heard the harmonica in the opening bars of Ashley Jane, I was expecting more of a blues number. Instead I got a song I honestly wasn’t quite sure how to peg until I reread the review for The Wild and saw at the time he was working on a song he called “quite Beatlesque.” “I’ll bet this was the one,” I thought to myself.

The upbeat mood of the EP, which began to slide back on Ashley Jane, really goes away with the somber Half Moon. But once you get over the change in attitude, it’s a very good song that actually could be at home on some radio playlists where serious songs are played. That’s another one which is growing on me pretty quickly.

Paying tribute to the late Chris Cornell, Paul takes the Audioslave song Like A Stone and makes it uniquely his own. Everyone has a particular vocal and musical style and tone, and Paul did a masterful job shaping the arrangement of the song (and playing the instruments) to his. I’m not sure why Paul chose to follow that with the short reprise of the chorus to Moment of Strength (or if that snippet will make the final LP version) but Like A Stone may be better suited to just be the final song.

Just going by what’s here I couldn’t say with certainty that Paul would defend his “title” but there are 10 to 12 songs to go and it is a promising start. This little album has a couple of the best songs I’ve heard all year. But don’t take my word for it – just listen for yourself and see.