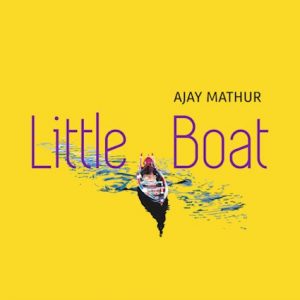 In his followup to an album I reviewed in 2015, Indian-born Swiss resident Ajay Mathur puts his stamp on rock with this 13-song compilation released last month.

Normally, the level of interest I have in an album as I review it is expressed in how many notes I make. Boring songs get a word or two, while better songs get several notes attached to them. So it’s worth mentioning that I have a phone full of notes (I did them as a QuickMemo on my phone as I was listening.)

Given that measuring stick, the most intriguing song on this album was a track called Grooving in Paris (All My Choices). A bluesy but brassy song, the issue I took with it was that he couldn’t seem to pull off the mood I thought he was trying to associate with the song, The same criticism goes for another song I considered in a similar vein, All Your Thoughts.

Once he added in more female harmony, though, the results were much improved. Time For Deliverance, the penultimate song on the compilation, works out much better and is one of the standouts.

Mathur tends to write complex songs, layered with several veneers that put together could be defined as an interesting version of Europop. After an almost country-flavored opening tune called Here’s the Love, I got that vibe with the weird opening to song number two, Forget About Yesterday.

“Little Boat” also features some significant mood swings. Start Living Again slows the album down before we get into the aforementioned Grooving. The same occurs later on as the collection’s best (and perhaps most humorous and true-to-life for a musician) song, My Wallet Is a House of Cards, is sandwiched between the downtempo songs There We Are (Do It Right or Not at All) and Ordinary Memory, although the latter picks up steam about halfway through. There We Are was one of those “few words” songs that didn’t hold my interest too well, but it wasn’t the worst offender: to me the “what was he thinking?” title went to the song Who’s Sorry Now. I was for having to listen to it.

In re-reading my review of his previous album, “9 to 3” I was reminded that Ajay occasionally does put such songs on his albums. I suppose I can see a reprise of Wallet sung in German (at least I presume) called Kartehuus, but why not make it a separate single when the other 12 songs are in English?

It’s things like the chord progression that I didn’t much care for in Little Boat reworking itself into a nice song that I took notice of, or the excellent solos that punctuate While I’m Still Standing Here balanced with some of the stuff that should not have made the cut that make “Little Boat” a good but not great album. But what do I know? I’m just a listener, and your opinion may be different once you endure Spotify and listen for yourself.