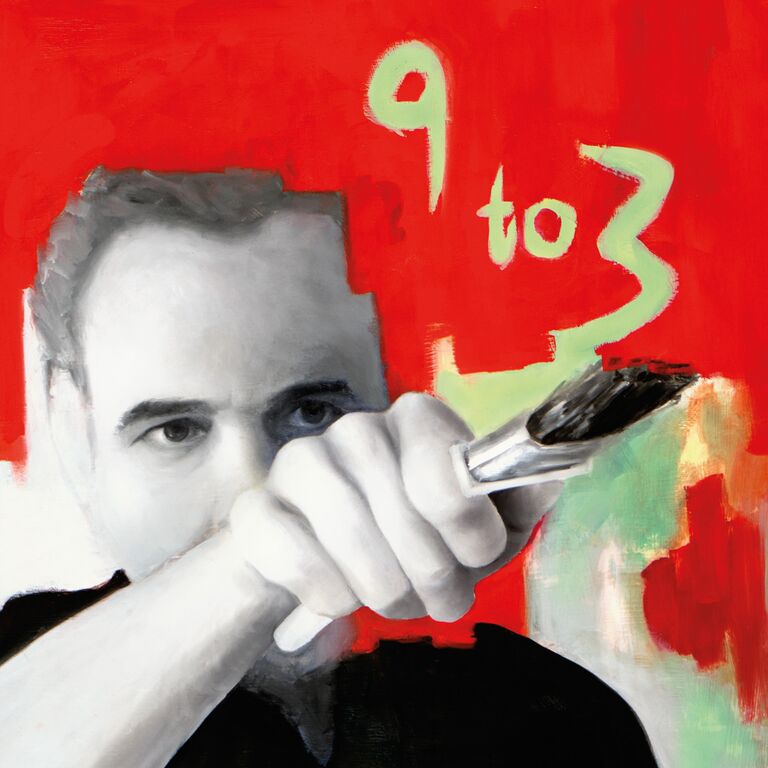 When a compilation has 15 tracks and runs over 62 minutes, you hope there’s a lot to like. Indeed, there is quite a lot of good stuff on this guitar (and sitar) player’s latest solo effort, which he describes in part on his Facebook and Soundcloud pages as “Bollyrock.” It’s appropriate as Mathur was born in India but now makes his home in Switzerland.

“9 to 3” has a wide range of songs which don’t just show Mathur’s instrumentation but his sense of humor as well.

The humor is reserved more for the interior tracks, though. The album leads off with the country-feeling Sitting By The Cradle, a song that evokes a little bit of an Eagles vibe, and gets backed up by the rockabilly Walking On The Water. Its harmonies have made the song something of an independent digital radio hit, as it’s charted in the Top 200 for a few weeks (#192 as of last week, although it peaked a few notches higher.)

There are a trio of other songs on the record which I could see as radio-friendly as well. View From The Top has some nice hooks in it, while adult contemporary fans will likely enjoy the love song Sleepy Moments. But the more likely and catchy candidate for mainstream radio would be Password Love, a song that begins to exhibit the humorous flair in Mather’s writing.

Leading off the songs that have the probability of making you chuckle is Latin Lover, which has a jazzy note to it. I could just smell the “Polo trailing behind” on that one. The more acoustic and biting All Up To Vanity scores because we all know someone who fits that bill, and most of us can relate in some way to Surfing Girl (Cyber Monday Mix). My only question on that is: who uses Myspace anymore?

Also presented in a unique manner is My World (SOS To The Universe), which employs a children’s chorus and spoken word interludes to create a song that tries to be deeper than three-minute pop pablum. It does a good job of sounding important, although the looping is a little bit cloying toward the end.

Where “9 to 3” begins to slip is the vocal presentation on slower songs, with one exception. I just don’t think Mathur has the voice to carry off otherwise worthwhile ballads like Nothing Really Matters, Oh Angel, or Tell Me Why Do I Still Love You. Nothing Really Matters actually ventures a bit into power ballad territory, while the other two are obviously more romantic.

On the other hand, Mathur’s vocals work much better for a bluesy-feeling song like Love Madness. It also employs the call-and-respond style found regularly in blues-based music to great effect, with a variety of tricks to keep the listener’s interest. I found that to be my favorite song of the “9 to 3” album. It’s also worthwhile to note that it was one of two songs (Sitting By The Cradle being the other) where fellow lyricist Mary Lou van Wyl lent a hand.

Mathur is a musical veteran, having began his career almost 40 years ago in his native India before moving on to Europe a decade later and finding success with a band called Mainstreet. So while he surely knows his way around the production side of things, it reminds me again why I tend to have issues with self-produced work. A different pair of ears would have convinced him to drop either the narcissistic I Song or its extended version that closes the album, I Mantra. “I want it all and I won’t let go and I want it now” is an annoying enough sentiment, but add more sitar and make it longer? Maybe there’s an Andy Kaufman-esque joke in there that I don’t get, but I thought 11 minutes of all that between the two was rather excessive.

Shakespeare once said, “Brevity is the soul of wit.” Deleting the latter two tracks would have made this a far better effort; instead “9 to 3” is more of a mixed bag with several solid tracks brought down by a few lowlights. But I encourage you to be the judge and listen for yourself.