Like many on my social media feed, I was stunned to learn of Friday’s sudden passing of Maryland political figure Joe Steffen, who reportedly died from a stroke and cardiac arrest at the age of 57. As a regular follower of his writings, I seem to recall this wasn’t the first stroke or heart issue Joe had endured, but this was one he did not survive.

While a lot of people are relating their experiences with Joe, including accounts of lengthy late-night chats and other time spent together, my time with Joe in person was relatively fleeting. I think the last time I ran into him was at last spring’s Maryland GOP convention in Annapolis, and I seem to recall as part of the general chit-chat I asked him how his books were coming. But the fact he could set aside his political career and write something that was totally 180 degrees out of phase with that part of his life – as opposed to books in the political realm – was admirable. Yet Joe had finished two novels in what he called the Death, Wish trilogy and was working on the “prequel” third part at times over the last few months. (Death, Wish debuted in 2013 and Dead, End came out last summer.) So I guess we’ll never know how Charlotte got to be the main character in Joe’s work.

But one thing that has inspired me to this day is that he would occasionally update his word count as he progressed with his novels, and that’s where I got the idea with my social media for updating with the running total of the word count on my forthcoming book to keep people in the loop on my progress. Perhaps it was also a tangible reminder to him as well, but I liked the idea so I’ve taken it on.

Since Joe was such a fixture on social media, though, I did engage with him quite a bit on some of the most unlikely subjects. One subject in my wheelhouse was baseball, as Steffen was a fan of the Oakland A’s and I like to follow my Detroit Tigers as well, so I would chime in at times during baseball season. And while his musical tastes weren’t exactly like mine, he often selected what he called “Get Your Ass In Gear” songs that I enjoyed hearing, too.

The one thing that seemed to endear Joe to many of the same people I engage with in the political realm, though, was his rebellious attitude toward party politics in Maryland. I don’t know about you, but at a wake of a Maryland GOP Fall Convention back in the bleak post-election landscape of 2010 – an election where the TEA Party wave that swept the nation somehow missed our state – this was my one cherished memory: the Renegade Room. 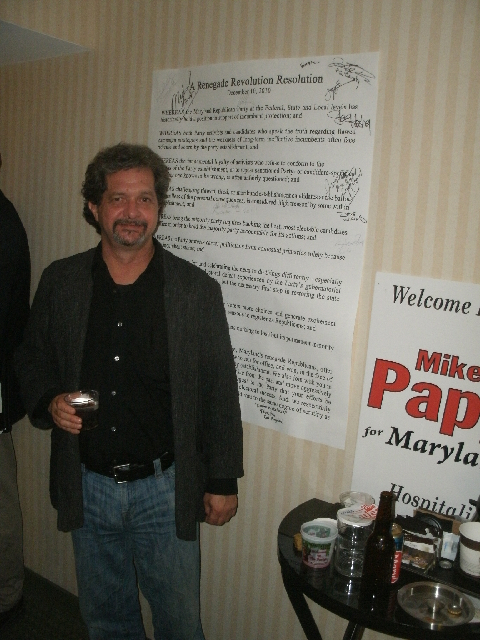 Somewhere on that document is my signature, too. Yet Joe insisted to the end that he didn’t dislike defeated 2010 candidate Bob Ehrlich – he just lost all respect for him. Obviously this and a lot of other statements from Steffen led to a lot of friction with certain quarters of the Maryland Republican Party, including areas where little guys seem to congregate.

Anyway, I went to his blog site and it turns out his last post is only about a week old. And it was interesting that the seminal event he picked out insofar as defying the conventional wisdom that there was no way a Trump election victory would occur is the day Donald Trump hired David Bossie, our National Committeeman. With that move, Steffen believed Trump had just won the election – turns out he may have been correct.

So if there’s one good thing we can look back on and smile about regarding Joe’s life, it’s knowing that he managed to live until “Borat” was safely out of office.

Now I’m sure there will be a formal service and whatnot for Joseph Steffen, but in reality he will be remembered by most in an informal manner for years to come when people continue to toast his memory with the adult beverage of choice. Yet there will be a few special people, including the princess of his world, who will remember him fondly for a lot of other things after the weeping of the immediate present is finished. It’s those people who deserve our thoughts and prayers upon Steffen’s sudden passing.

All this serves as a reminder that we all have our time in this world (after all, Joe was only about a half-decade older than I am now) but those who make the most of it are the ones long remembered. I don’t often write pieces like this – in fact, the last time I did was for my late brother almost seven years ago – but seeing the outpouring of shock and grief on my social media page, and having the respect for him that I did, even if from afar, I felt it was something we all needed. And in Joe’s memory, I did it in 851 words.