I’m not much for April Fool jokes, so don’t expect one here. But it was funny to me how many of my friends on social media pledged their allegiance to Donald Trump today. So why do you think that is?

Among a certain political subgroup, Donald Trump is the Rodney Dangerfield of politics – he never gets no respect. So what if he can’t help being a gaffe machine – maybe not quite to the level of Joe Biden, but Biden has had about 30 to 40 years in politics to hone his “craft” while Trump is learning on the fly. The latest is about punishing the woman for getting an abortion, which would be a interesting turn of events, wouldn’t it? But Trump was only following his President, who as you may recall didn’t want his daughters punished with a baby.

And then we have the lightbulb meme, of which this is a version that reflects well on how Trump speaks. 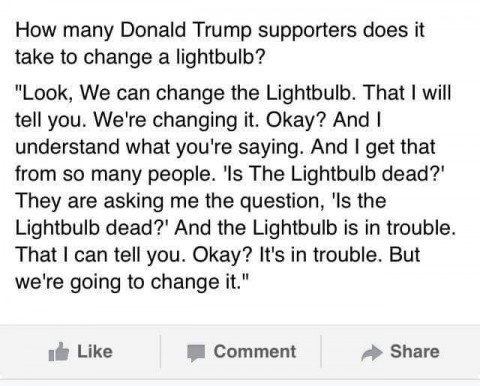 If you have ever taken the time to hear him speak off the cuff, you wonder how he ever made it on television. We have picked on Barack Obama for years about his overreliance on teleprompters, but it seems that they were invented for Donald Trump.

It’s rather unfortunate that there was no primary election or caucus tonight because I think the results would have been that Donald Trump won for both parties. How else do you explain a guy running as a Republican who has donated a lot of money to and adopted a number of positions borrowed from the Democratic Party? If you thought the game of Twister was intriguing, just wait until you see the knots the GOP will have to tie itself into to back up what Trump says if nominated.

Considering that less than half the Republican Party has backed him in any particular state, Donald Trump is the most curious case for a frontrunner ever. Somehow it seems appropriate I discuss him at a little length on a day known for jokes.

One thought on “No fooling”