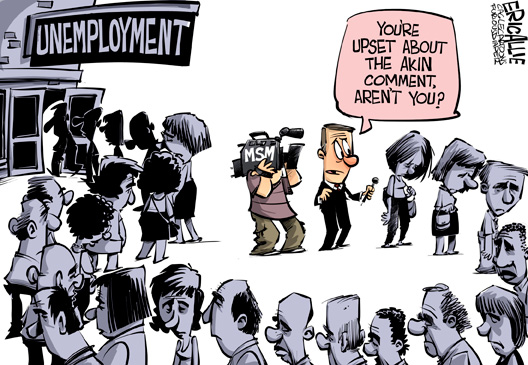 Yesterday I highlighted a Senatorial candidate who’s done almost everything right, but today I want to talk about one who’s done something disastrously wrong. Or has he, really?

To me, it’s questionable that the concept of “legitimate rape” exists, because someone made a distinction which isn’t there – obviously Todd Akin should know that rape is rape, murder is murder, and so on. Now I have no idea about the pregnancy part of it, but this is definitely a case where the candidate inserted his foot deep into his mouth – so deep he’s sucking on his shin bone.

So there were a huge number of Republicans who called on him to get out; in essence his funding dried up overnight. But I happen to know at least a couple bloggers from Missouri who stubbornly support Akin and would like the state and national GOP to dry up and blow away themselves. Bob McCarty (who I’ve featured several times on this page) writes:

MOGOP leaders should resign as a gesture via which they admit just how wrong they are/were to want to try to boot Todd Akin from the Senate race.

Even more telling is a note from someone who most would consider a “regular” person – i.e. not a political junkie like many of my peers. From another Missouri-based blogging friend of mine, Melinda Musil:

There’s a saying in psychology circles that the best predictor of future behavior is past behavior. If you want to know Todd Akin, if you want to know how Todd Akin will vote, look at his past voting record in the House. He voted for concealed weapons, against increased taxes, against Missouri state funding for abortion. He is conservative to the core. That’s the kind of Senator I want.

On his site, Akin is contrite:

I made a mistake. What I said was ill-conceived and it was wrong and for that I apologize. I believe that working to protect the most vulnerable in our society is one of our most important responsibilities.

The criticism from Republicans seems to center on two fronts.

One is the thought that Akin has irreparably eliminated the opportunity to flip a Democratic Senate seat in Missouri and may eventually cost Mitt Romney the state as well.

The second is that abortion is an issue Republicans can’t win, and many in the establishment would dearly love to be able to take the pro-life crowd for granted – give them enough lip service to continue receiving their votes but never really attack the core of the problem, which is Roe v. Wade. They fret about losing the women’s vote.

But there is a reality of the situation here which must be considered. Even if we get a filibuster-proof majority in the Senate – heck, let’s go for broke and say we get the 2/3 required in both houses to move a Constitutional amendment prohibiting abortion, whether it includes the usual exceptions for cases of rape, incest, and the life of the mother or not – it’s not going to get through 38 states in my lifetime. That day doesn’t occur until we as a disposable, throwaway society change our attitude about the disposable, throwaway lives radical abortion supporters haughtily call “non-viable tissue masses.” (In truth, I don’t support the Constitutional approach anyway, feeling a state-by-state approach is more effective and more in line with the intent of our Founding Fathers.)

The reason I led off with the cartoon, though, is that what’s said has been said and regardless of how much Todd Akin backs away from his statement his words will be used against Republicans. We should know that’s how the media and the Democrats (but I repeat myself) play this game! In short, we have provided them with a distraction, another shiny object they can use to draw attention away from the real issues of the economy and oppressive hand of government.

If the RNC and other establishment Republicans want to drop Todd Akin like a hot potato, well, that’s their right. Obviously there’s the possibility, though, that the pro-life community which rallies to Akin’s defense isn’t going to be as likely to help Mitt Romney win his election. And again, let me stress: this issue is a distraction we’re allowing Democrats to use because they know just as well as we do that abortion isn’t going anywhere in the near-term. Yet they use this cudgel to scare women just as they use the prospect of any change to Social Security or Medicare to try and scare seasoned citizens. We know this.

Of course, there is another group who is saying they told us so, and that’s the 64 percent who supported someone else in the primary – most notably those who preferred Sarah Palin-backed candidate Sarah Steelman. But I’m sure Democrats would have attacked Steelman simply for being backed by Palin; that’s what happens when you have no record worth running on. Democrats even slyly bankrolled Akin with $1.5 million in ads for this open primary, just as they tried to tip the scales to former Congressman Frank Kratovil locally by backing the Libertarian candidate Richard Davis in 2010 with mailers to Republican and conservative households.

So Missouri Republicans are in a pickle. If Akin stays in, there’s a segment of the electorate who sees him as damaged goods. If he gets out, the state party looks spineless and the successor will be answering the same questions Akin would anyway. All in all, I’m hoping Akin goes on the attack and doesn’t play Mr. Nice Guy. He’s now at a point where he has nothing to lose so he can go ahead and lay waste to Claire McCaskill.

Hopefully the Democrats will learn in November the age-old lesson of “be careful what you wish for.” Conservatives in Missouri – and everywhere else for that matter – should just say that what Akin said pales in comparison to the real issues the liberals are trying to duck: their failed economy and their thirst for power in Washington.

One thought on “Akin creates a pain”