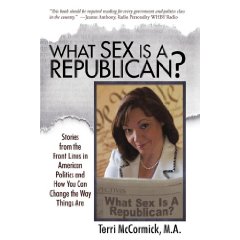 While TEA Parties weren’t being contemplated yet in the early 1990’s, Terri McCormick was leading a grassroots effort of her own. After becoming involved in her children’s school, Terri worked for change within the system but was stymied by the powerful teacher’s unions. She was forced to build a broad coalition and take her fight to the statewide level – through her leadership the state’s legislature finally adopted the necessary reforms and allowed the formation of charter schools.

At times, What Sex Is A Republican? does read like a how-to textbook for would-be politicians, including a short summary of bullet points after each chapter. It’s a method of giving some of the nuts-and-bolts of campaigning from a woman who has been there: after spearheading the drive leading to charter schools and educational reform in Wisconsin, Terri McCormick ran for and won a seat in Wisconsin’s state legislature in 2000.

But even more telling in the story is McCormick’s heavy emphasis on the political gamesmanship once a candidate wins office and arrives ready to serve constituents. Her book talks at length about the treatment she encountered while in the Wisconsin House, couching the dealing and backbiting she witnessed in Machiavellian terms.

And while she decries the “vertical silo” of radical partisanship exhibited by many in both parties, her most bitter venom comes at the expense of what Terri calls “front row politicians,” the party leadership which controls how the legislative game is played. Those who have that sort of political power determine which bills are moved, which amendments are added, and even select the staffers who work with their inferiors, who are relegated to the back benches.

Yet the political shenanigans didn’t stop there. In 2006 McCormick opted to leave the Wisconsin legislature to make a bid for Congress, only to find out after she’d made the decision that she was not the “chosen” candidate in the race and that Beltway Republicans had already decided to back her opponent. Terri noted during a campaign appearance afterward that, “I am running for the Eighth Congressional District against George W. Bush.”

In writing What Sex Is A Republican?, Terri McCormick manages to reinforce practically every stereotype of the person we’ve come to expect as a career politician: arrogant, vainglorious among his peers, and exhibiting an insatiable lust for power. Sadly, she also correctly points out that most regular folks are drummed out of the political business because they just have too many morals to get along in such a system.

Still, McCormick obviously believes that, despite its faults, there is a place for good people in our political system. Moreover, she feels that, with the assistance of a populist campaign built upward from the grassroots, it is possible for people who want to be there for the right reasons to run and win despite today’s political climate. While her book could have been tightened up a little bit, Terri McCormick’s case for convincing a would-be candidate he or she can make a difference is strong and those who aspire to political office, particularly women, may well find this a helpful guide to read and follow.

Disclosure: I was asked by The Cadence Group to review the book and they sent it along to me to do so.

2 thoughts on “Book review: What Sex Is A Republican?: Stories from the Front Lines in American Politics and How You Can Change The Way Things Are, by Terri McCormick, M.A.”