Yesterday I posted on the gerrymandering “silver spring” of the Swing State Project proposed to wipe away the GOP from Maryland’s Congressional delegation. He (or she) also did the same for Maryland’s General Assembly.

At the moment the composition of the House of Delegates is 104 Democrats, 36 Republicans, and 1 independent who often votes with Republicans. In the Maryland Senate the ratio is 33 Democrats to 14 Republicans.

So imagine a new redistricting plan which makes the numbers even more onerous for the GOP:

Under the plan drawn in this diary, all Democratic seats are preserved and/or strengthened.  Different things can happen in elections, but, in the most likely scenario, the new lines will add 3 or 4 Democratic Senators (Districts 9, 31, 37, and perhaps District 3 – if Alex Mooney survives the 2010 election) and between 11 and 14 Democratic Delegates … Yes, at that point the Democratic presence in the Maryland Legislature would approach that found today in the Massachusetts Legislature ! … well, maybe not quite that high, but in reality within 10 points of Massachusetts.

While the poster claims that this plan is more friendly to county and community lines, I beg to differ – at least as far as the Eastern Shore is concerned.

At the moment, the nine counties of the Eastern Shore essentially share three Senate districts (36, 37, and 38) and five House of Delegates districts (36, 37A, 37B, 38A, and 38B.) Part of Cecil County lies in District 34, and one caveat of District 36 is that no county can have more than one Delegate so they are spread among Cecil, Kent, and Queen Anne’s counties. But on much of the Shore, dividing lines are fairly true to county lines – let’s look at how each county is split now:

As it currently stands, just three of the nine Eastern Shore counties are split into multiple Senate districts and four counties have multiple House districts. That all changes under the plan “silver spring” presents. 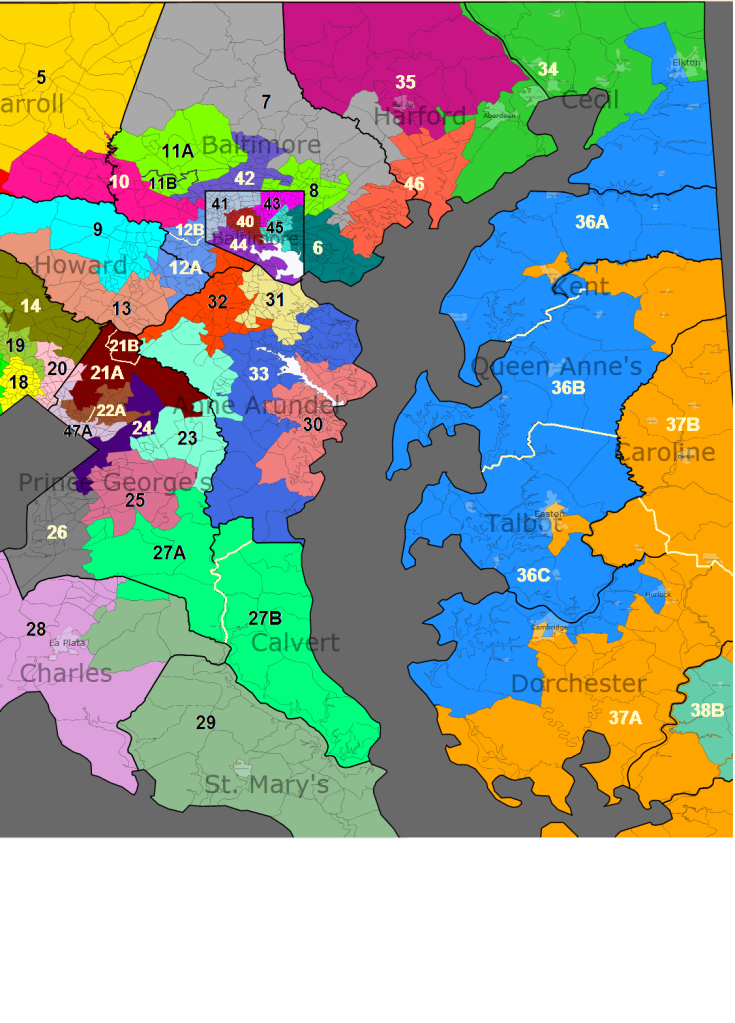 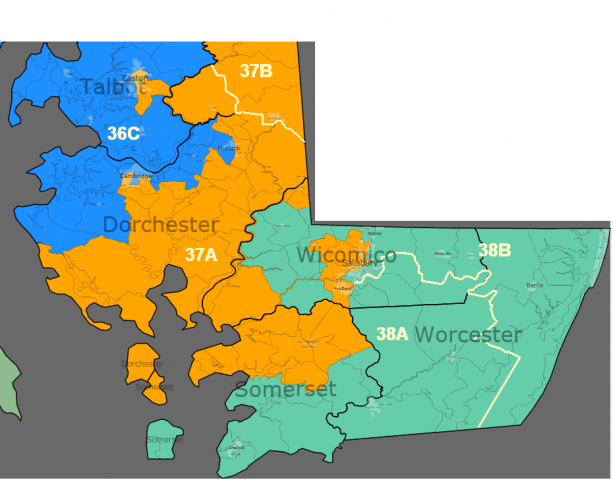 As you can see, the only Eastern Shore counties which aren’t split into two Senate districts by the proposal are Caroline and Worcester, and all counties are jigsawed into multiple House of Delegates districts.

But what’s most sinister is wrapping these districts around into urban areas just to pick up a particular number of Democrats and placing all into play. As “silver spring” notes in summarizing the Eastern Shore plan:

The current district expands south and is sub-divided into three sub-districts — each corresponding closely to a county or set of counties:

36A – Cecil and Kent Counties (also includes one precinct in Queen Anne’s directly across from Chestertown in order to maintain equal population); 46% Obama; this sub-district could perhaps elect a Democrat, breaking the GOP stranglehold on District 36.

Currently, three out of four representatives here are Republicans.  The re-map expands the current district northward and the sub-districts remain.  However, sub-district 37A will now have two Delegates, instead of one, and 37B will have one instead of two.  The lines forming the border between the new 36th and 37th don’t line up perfectly with county boundaries.  However, the goal here was to create a minority-influence district on the Shore.  Even though only about a third of the population of the new 37th is black, that population might have an effective voice in how the district is represented in Annapolis, through an alignment with white Democrats in the area — the borders intentionally include more “liberal” (relatively) white-majority areas like Chestertown and Easton.

Here’s a break-down of the sub-districts:

37A – two Delegates; lower Eastern Shore: Salisbury, Princess Anne, Cambridge, Easton; 51% white; 41% black; 58% Obama; although on paper this district is majority white (barely), blacks constitute a majority of the Democratic primary vote here.  Thus, there’s a good chance the district can elect two African-American Delegates (increasing their representation on the Shore by one).

Bottom line for District 37: Probable addition of Democratic Senator and one Democratic Delegate (there’s a good chance the Delegate will be African-American).

The new 38th is quite similar to the current district.  The district here currently elects a GOP Senator and GOP Delegate in sub-district 38A, while 38B elects two Democrats, even though that area is even more Republican than 38A.  The two Democrats include one legislator from Salisbury and a former mayor of Ocean City, so personal popularity likely plays a part, especially in the case of the latter.

38A – includes parts of Somerset and Wicomico Counties (as does the current sub-district) but also expands east into Worcester Co.

38B – includes much of Worcester Co. and part of Wicomico around Salisbury.

I haven’t figured out just what impact this would have on existing Delegates and Senators but chances are pretty good this would place Republican delegates currently in separate districts against each other, particularly as the 36th District evolves southward.

It’s obvious to me that Democrat activists really don’t care a whole lot about maintaining the continuity of communities or using logical geography to create districts. This isn’t to say the GOP is completely blameless, but in their position here in Maryland they would be hard-pressed to draw themselves to majority status.

Another tactic to look for from the Democrats who draw the lines is working within the population guidelines to make districts which lean Republican larger in population while maximizing the number of safely Democratic districts through arranging them to be smaller than the norm. Eventually in a state of 6 million people divided by 141 they could pick up a seat or two just by putting their thumb on the scale here and there.

If I were to draw the lines, I would attempt to value common geography over party. For example, for a county that falls right on the number for having a district I would try to set them up in their own district, regardless of what the voter registration numbers are. Nor do I believe in “majority-minority” districts since I thought we were supposed to have a colorblind society and truly it’s none of the census taker’s damn business what color I am. All the census is supposed to be for is to determine the number of people in the household for determining fair representation.

Looking at this map with splotches representing pop art on a bad day, this is no way to determine representation fairly. If it takes the judicial system to make things more fair, I suppose it’s the resort we will have to take.

Now we know the depths the liberal opposition will sink to to achieve their ends. There’s little wrong with the way the Eastern Shore is set up now (save the spider-like District 37A) so we should fight to keep things pretty much the way they are. If it happens to be a Republican area, well, that reflects the conservatism shared by the majority.

2 thoughts on “Slicing up the Shore”