Yesterday in Salisbury a band of about 30 protestors braved the humidity and threat of rain to send a message to Congressman Frank Kratovil – keep Obamacare and the government out of our lives! 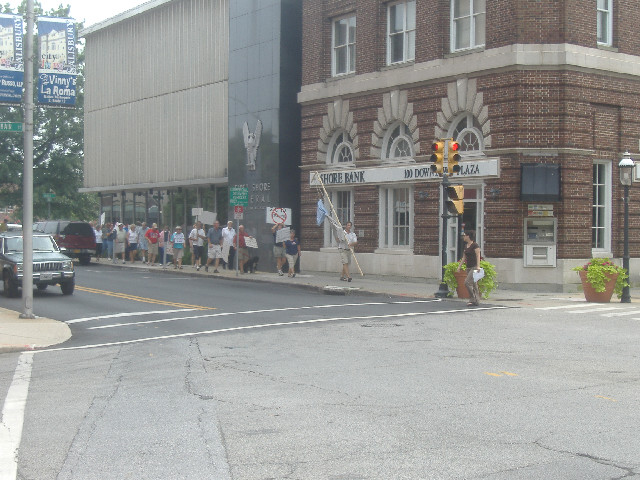 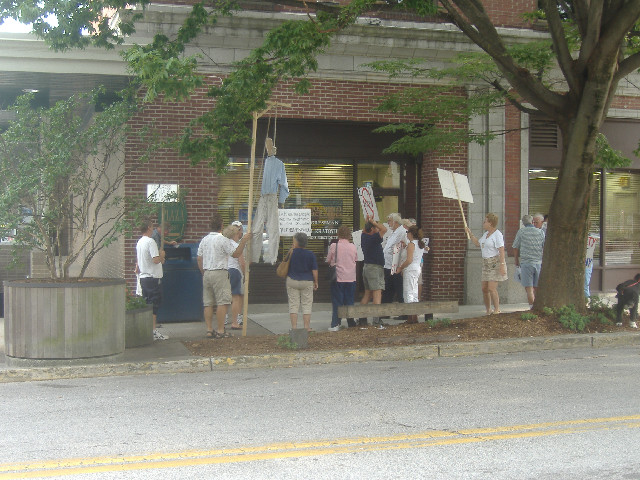 Let me say straight away that I wouldn’t have recommended the noose and effigy of Frank Kratovil. The “no Kratovil in 2010” (as in the first photo below) would have been effective enough. And it’s not like the signs weren’t quite creative, like the ones in the second and third photos below. 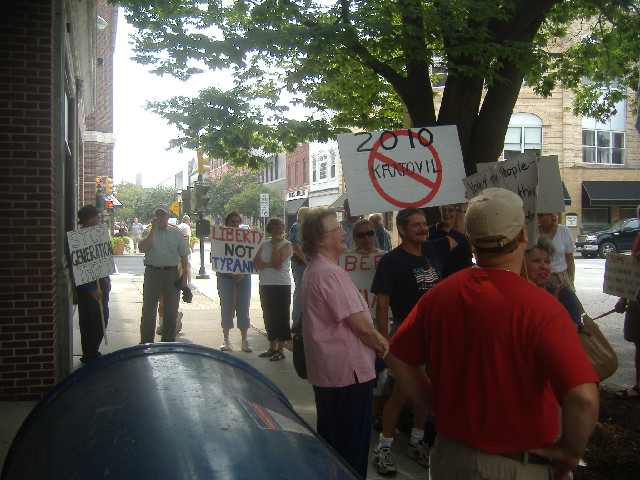 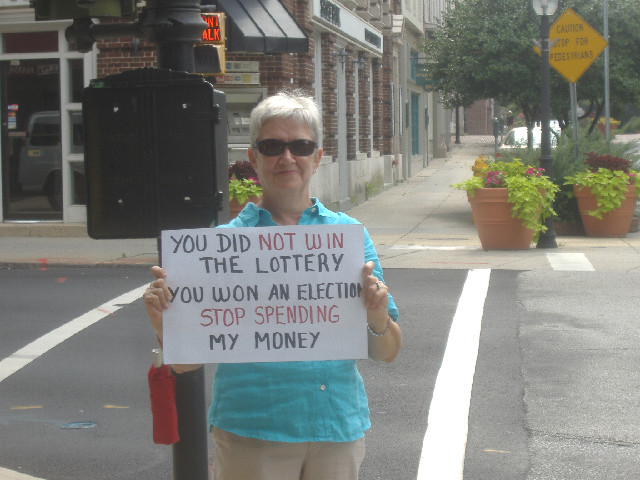 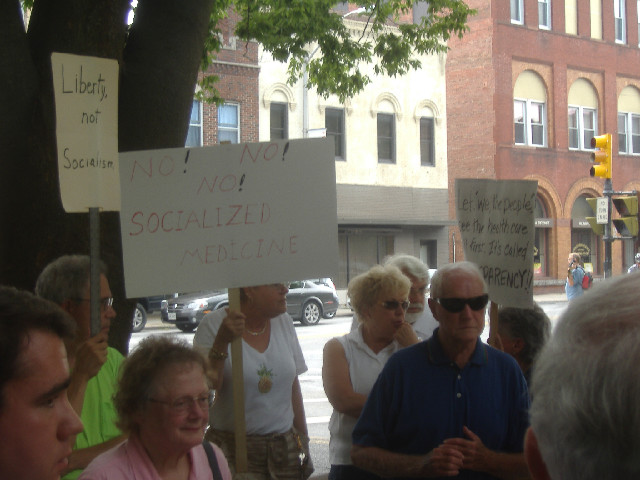 Obviously those in the protest had concerns about Obamacare. Chief among the murmurs was coverage of illegal immigrants and the lack of tort reform while the rest of us lost our option to keep private health insurance. As one observer put it, private solutions can do a better job while another complained (correctly) that “small businesses don’t know what to do” because the federal situation is in such flux.

Eventually the group was greeted by Kevin Lawlor, who is the Communications Director for Congressman Kratovil. 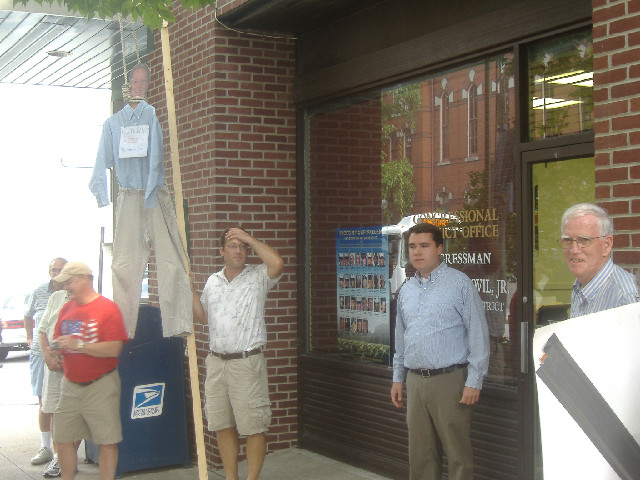 Lawlor stressed that the Congressman was “not committed” yet on the Obamacare bill and that he has “a lot of questions and concerns” about it. 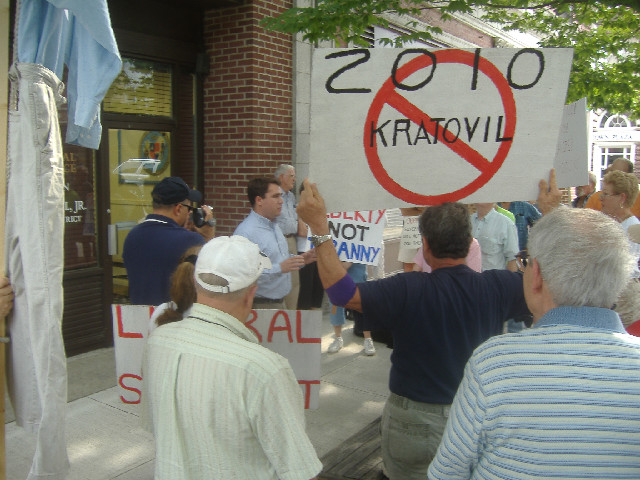 One criticism I would have about the organization of the protest is that the questioners strayed from topic. I think they perceived the flip-flop by Kratovil on cap-and-trade (many protestors noted Frank was originally leaning against it) as a sign of him being “Nancy Pelosi’s lap dog.” But Lawlor countered by saying a lot of people were for cap-and-trade too, and that the office averaged 500 to 600 calls a day in the heat of that debate. Moreover, Frank “doesn’t think cap-and-trade will fail”, according to Kevin.

Once the questioners got around to debating the merits of the healthcare reform bill, the remark by Lawlor that “people want to see some reform” was met by the retort that several states had tried and failed at being healthcare providers. Congressman Kratovil, noted Kevin, “supports the public option but not at the expense of private insurance” and countered that the extra taxes people were concerned about were already being paid when those uninsured can’t pay for their health care.

Lawlor also claimed that Kratovil is asking the same questions we are and “trying to change” the legislation to “make it better.”

But the sentiment among those in front of Frank’s office was one of skepticism. “Leave us alone, we’ll fix it ourselves!” cried one. Another in the crowd, which was made up primarily of seasoned citizens, asked why she was forced to give up her private insurance when she became eligible for Medicare. Kevin pledged that the Congressman “will not vote for a bill that makes people leave private insurance” and further stated that Kratovil is “doing his best to let people know why he votes the way he does.”

I found one question asked by a protester had an answer both troubling and disturbing. Since I know Frank’s office reads monoblogue, perhaps they can clarify this response.

When asked about the Constitutionality of the proposal, Lawlor responded that the Congressman “doesn’t necessarily think” this conforms to the Constitution. I guess I’d like to know where a lot of other items he’s voted for manage to conform to our founding documents.

Since I’m certain this isn’t going to be a one-shot deal, the suggestions I would make to the protestors would be to stay on topic better and designate one or two spokespeople to ask questions. Granted, this turned out to be a peaceful 45 minute dialogue but a lot of energy was wasted on items which weren’t really germaine – Frank can’t change his cap-and-trade vote (although he can vote against any version coming from a House-Senate conference.) Kevin noted that he’d addressed a similar protest in Bel Air last week and another is coming up.

A different rally occurred last Wednesday down on the Eastern Shore of Virginia. District 100 Delegate candidate Melody Scalley (a definite friend of monoblogue) sent along a few photos of the Eastern Shore Declare and Defend Rally down at the Eastern Shore Community College in Melfa and described it this way:

My sincere thanks to everyone who joined us for this event! We are all concerned about the direction that our Government is headed and the amount of Government spending underway.

Following the rally over 30 people enjoyed dinner at a local restaurant, prompting someone to say that we were bringing our own private business stimulus to the Eastern Shore!

She also sent along her own photos. I have to say that she’s done it very conveniently in a nice 640×480 format – thanks Melody! 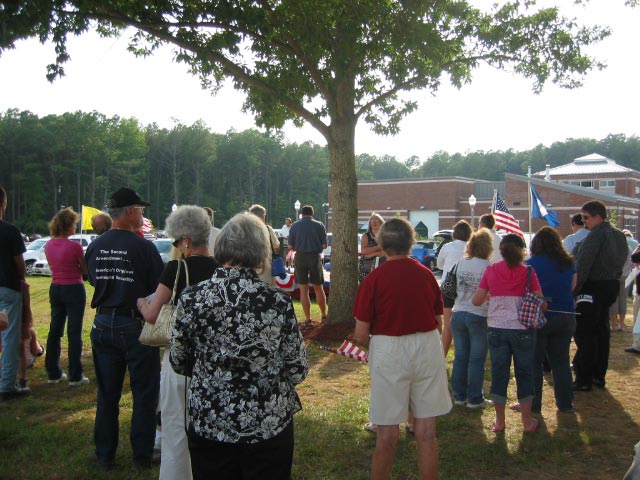 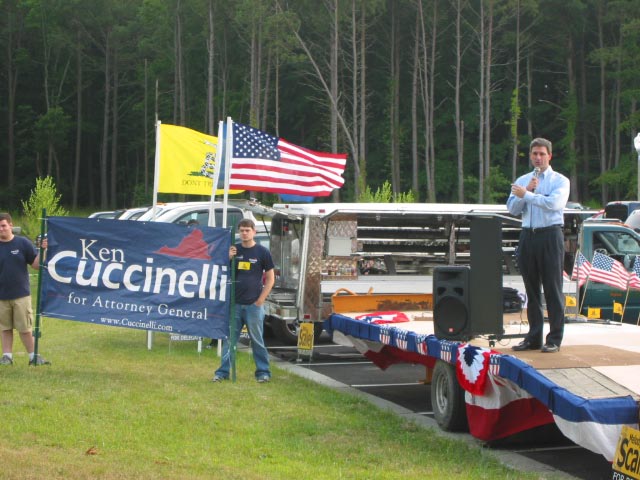 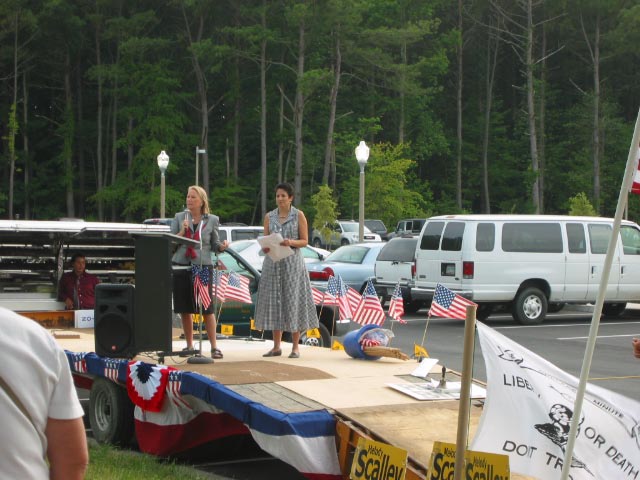 It’s worth pointing out that the Maryland part of the Eastern Shore was well represented by Andrew Langer of Campaign for Liberty and Pocomoke City mayor and General Assembly candidate Mike McDermott, along with other local and national speakers on a variety of conservative topics.

I’m also working with Melody on something that could be a first for monoblogue, so stay tuned for that.

Finally what can I say? I hope the title gets me some extra Google hits. But the mood among many freedom-loving Americans is one of panic, albeit a restrained panic thus far. It’s why these rallies have suddenly become big news as government tries to become a bigger force in our lives.

We may have gotten a late start but that doesn’t mean we can’t fight to the finish.

42 thoughts on “Widespread panic (about our freedom)”