Today in my mailbox I received the sixth in what seems to be a continuing series of mailings promoting E.J. Pipkin, and in this one he decided to go negative too. 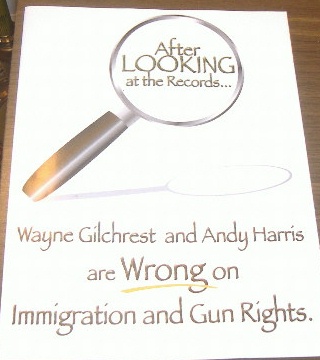 (Sorry the picture’s a bit off, I kept getting too much glare from my flash otherwise. I don’t own a professional studio, you know.)

So I decided that he looked at the records, maybe I should too.

Pipkin’s ad noted that Gilchrest “voted for Bill Clinton’s ban on certain firearms owned by millions of law-abiding American citizens” but didn’t give me the exact vote they determined this from. Then he took Andy Harris to task for voting against expanding deer hunting season (HB9, 2002) and not allowing Sunday hunting in certain Eastern Shore counties (SB717, 2007.) But according to the vote tally for the latter bill, Harris did not vote either way on that bill’s third reading, a vote Pipkin did support in the 40-4 decision. Apparently Harris is simply adamantly against Sunday hunting, also voting against another similar bill in 2006. On the other hand, Harris has no problem with the concept of hunting via the internet, as the Senator voted twice against bills that Pipkin supported prohibiting the practice. I look at it this way – as long as someone is there in the field collecting the meat and hide for good use and not just killing for sport there’s no issue in it to me. (Truly I’d never heard of the concept before doing this research.) But the General Assembly felt differently.

But is not allowing hunting on Sunday or letting people hunt via internet truly germaine to gun rights? More important to me is the right to get a permit and carry.

Last year Andy Harris was a co-sponsor of SB762, which would have “(r)epeal(ed) the requirement that the Secretary of State Police find that a person has a good and substantial reason to wear, carry, or transport a handgun before issuing a handgun permit to the person.” In other words, shall-issue. Unfortunately that bill got nowhere.

Another bill sponsored in part by Harris (SB10) in 2004 would have “(a)llow(ed) a person to sell, rent, or transfer ammunition for regulated firearms to persons under the age of 21 years who are members of the armed forces of the United States or the National Guard.” Makes sense to me, since they’re in the military anyway!

Not to be outdone, Pipkin sponsored a bill (SB424) in 2005 that would “(repeal) a provision that establishes a procedure for the collection and reporting of handgun shell casing information.” The next year E.J. co-sponsored SB911, which was the predecessor to 2007’s SB762 that Harris sponsored. Why Pipkin dropped his sponsorship of essentially the same bill one year later is a good question.

And Wayne Gilchrest has a decently pro-gun record in some respects. While Pipkin’s mailing didn’t cite the bill that he hammered Wayne on, the Project Vote Smart website shows Gilchrest did vote for defunding enforcement of trigger lock laws and voted for protecting firearms manufacturers and dealers from liability for crimes committed with guns they sold. Not spectacular but certainly not evidence of the gun grabber Pipkin made Wayne out to be.

To turn a phrase then I’d have to say Pipkin’s argument recoils on him when it comes to gun rights. Of course, I’m not seeing where any candidate is in favor of rolling back some of the federal gun restrictions should they assume or remain in the First District Congressional seat, and that’s disappointing to me. A reminder to all of you, please reread the Second Amendment:

“…the right of the people to keep and bear Arms, shall not be infringed.”

11 thoughts on “Pipkin fires at opponents about gun rights”