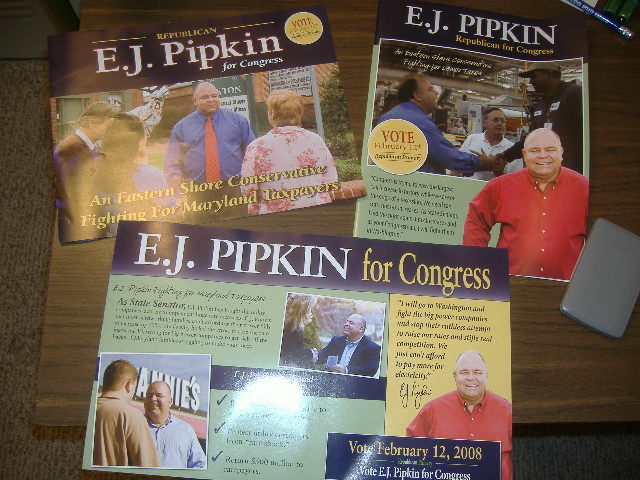 Today in my mailbox I found the third in what seems to be a regular series of mailings designed to remind me and anyone else on the mailing list that E.J. Pipkin hails from the Eastern Shore and is a hawk when it comes to lowering taxes. While I’m all in favor of keeping more money in my pocket, I’m also curious to know whether Pipkin is doing any mailings to the parts of Anne Arundel, Baltimore, and Harford counties that also inhabit the First District.

As a counter to the Pipkin mailing offensive a supporter of Andy Harris, former Delegate Herb McMillan, penned an op-ed in the Washington Times yesterday. While McMillan notes that both Harris and Pipkin are on the taxpayer-friendly side, Pipkin compares more with Gilchrest in certain aspects of his voting on social issues. Particularly damning in the eyes of McMillan was E.J. Pipkin’s support for pro-choice and pro-civil union legislation that came up in the General Assembly, along with his vote for Governor O’Malley’s huge budget last spring. That’s the one that took a huge bite out of the budget surplus Governor Ehrlich had before losing the 2006 election in an anti-GOP tide.

But a funny thing is happening on the way to the 2008 primary election – there’s still an incumbent in the race. Standing on the sidelines in this cat fight between state senators, Wayne Gilchrest gets to enjoy keeping his powder dry as his two biggest competitors claw and scratch each other up. It’s apparent Harris’s strategy is to place both opponents as “two liberal peas in a pod” while Pipkin seems to be attacking neither of his two main competitors in the race directly, choosing to stress his conservatism in comparison to Wayne Gilchrest and his domicile in the case of Andy Harris. If anything, the Gilchrest camp is attempting to instill fear in the Republican party, the fear of losing the seat to a Democrat should Andy Harris win the primary because he’s too conservative. Thus far we haven’t seen much of an anti-Pipkin effort out of Wayne’s campaign. Whether that’s by design or just because Pipkin’s still fresh to the race remains to be seen.

One of the other contenders is making noise in the contest as well. According to the PolitickerMD website, First District aspirant Joe Arminio has declared himself as “officially join(ing) the Ron Paul ticket” as of December 1st. That’s not too surprising, considering that Arminio regularly bills himself as running against a number of “neocons” for the seat and also based on his comments at the Wicomico County Straw Poll back in September. (Arminio’s also the scheduled speaker at our January meeting.) Ron Paul has a small but extremely passionate following and that stance by Joe Arminio could deflect voters away from the three top contenders.