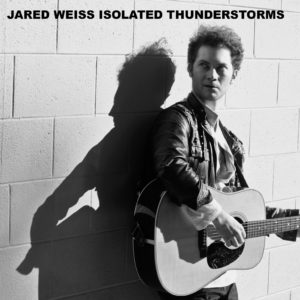 As the last in a long run of records I was asked to review, I hesitated to write about such a CD given the summer we’ve had. But this is an isolated thunderstorm you really won’t mind too much because it’s actually rather refreshing.

While Jared Weiss describes himself as folk-rock, the album exhibits a lot more by veering into rockabilly and more of a theatrical feel such as Queen would perform. Combine this with the rather witty lyrics Jared pens (and sings very well) and you have a winner. And unlike many artists just starting out, Jared has written songs that fit well with his rather distinctive voice, one that sounds almost like it should be singing at a Broadway show than slumming in the music industry – but it works.

(As you know, I listen to the album before I read the artist biography and media notes. So what do I read when I look it up?

Explains that one! I swear I did not know that on first listen! And I found out more, as you’ll read on to learn.)

But this tidbit of biography also gives me two insights. One is why this album has a dark lyrical undertone, almost like these songs portray vignettes from a tragedy. But the theatrical influence also explains the dramatic tone of the compilation. The best example of this is on the closing song, Elusive Particle – that’s the one that gave me the “aha!” moment to add the Queen influence to my review. It’s by far the longest song of the eleven tracks, as the album is only 41 minutes long.

Now there are times where the songs indeed sound like they belong in a Broadway musical rather than on the radio, such as on the track Saving Tomorrow (For You), but when he sticks to the more rock-n-roll sound or evokes Bob Dylan with the harmonica like Jared does on Darling, Reni, it snaps back to form. One extra little bit of flavor is the touch of Latin influence present on Annalu (From Monterey) and Can’t Remember Your Name. It’s another touch that helps the album along. The latter song also makes the album more of a whole as it lyrically refers to the previous track Not Everything That Dies Grows Old.

Honestly, after I heard the first rendition of the title track (the album has Isolated Thunderstorms and the completely different Isolated Thunderstorms II for good measure) I thought to myself that I have a hard time believing I’m going to find four more albums in the rest of 2018 to push this out of my top five. This is a well-produced and executed album for a debut effort, which came out in May.

So let’s see if you agree with me that this probably belongs in a top five list somewhere (once again, if you don’t mind the annoyance of Spotify.) Just listen for yourself and see.

And in looking a little farther into Jared I found a couple interesting items to solidify my opinion. First this, from social media:

Buy my record. I’m not the greatest self-marketer. I don’t have an agent, record deal, champion, eager fans, or talent for playing the game and kissing ass. I have an album of songs. I wrote those songs. Writing those songs saved my life. Listen to the music, then please buy my album.

All this is true. In fact, one link I was sent was to a Youtube page, where I had to dig around and find an older version of Elusive Particle. I’m not sure if this is the same “killer band” that performed on the album, but you can see the raw talent.

I guess my question is why it took several years to do this album? Could it be that this is the one older track and the others are newer? (I know of bands that have released the same track on a couple early albums in a row to fill them out.) Anyway, maybe these aren’t the newest songs, but they’re generally really, really good nonetheless.