At first glance (which was actually Monday when I first compiled the splits to see who had the best month) it seemed like both of these awards would be a slam dunk. But the last couple days allowed a little bit of competition, meaning my honorees had some company by month’s end. 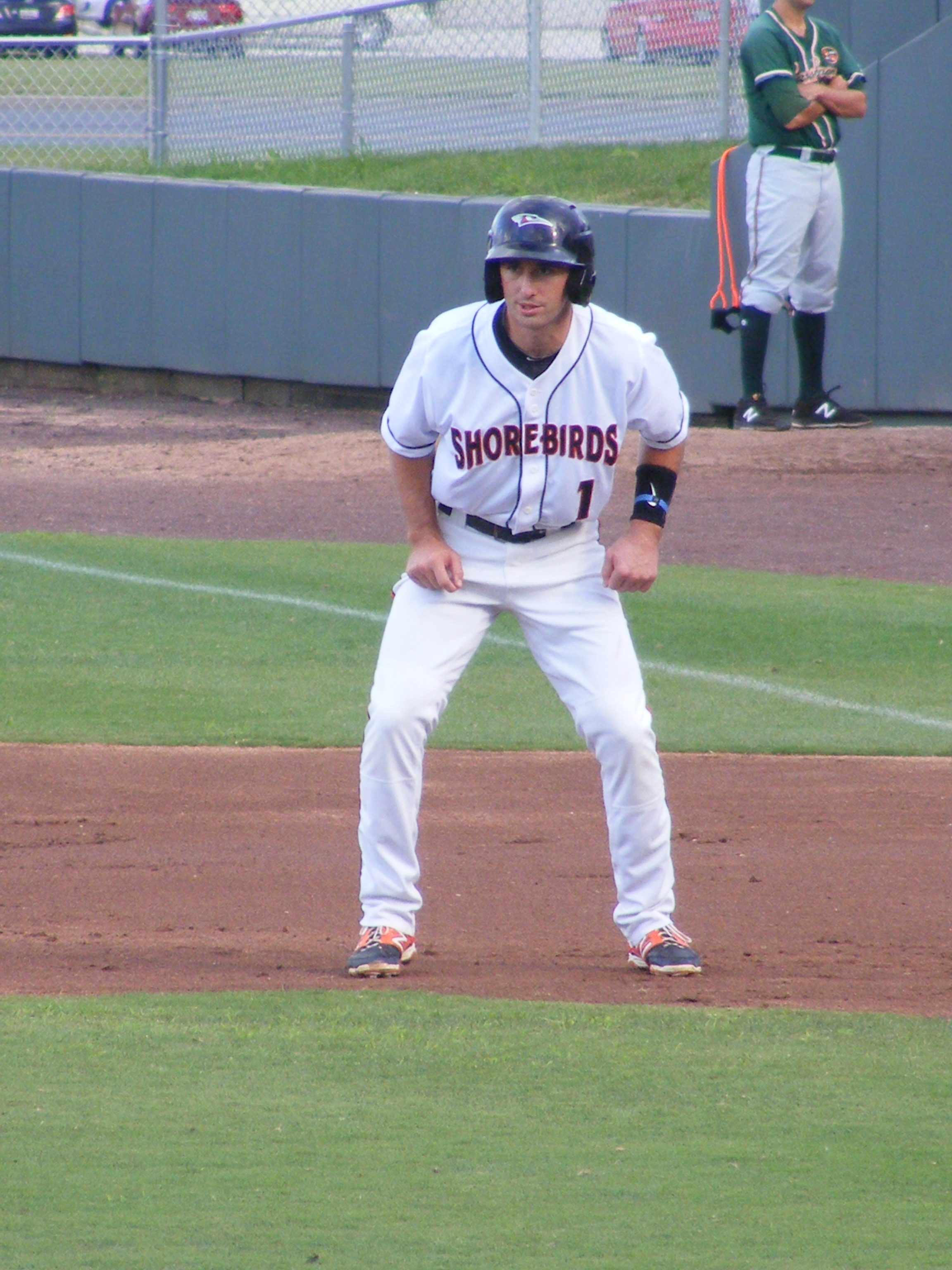 If you saw my social media comments around the first of the month, I noted the arrival of first-rounder Cadyn Grenier should have allowed the guy he replaced at shortstop to move up to Frederick as I thought he had earned the shot. Instead, the Orioles brass decided to move Mason McCoy over to second base. While his fielding hasn’t suffered much, McCoy is struggling at the plate when he plays second, hitting at just a .231 clip on 12-for-52. But since Mason’s back at shortstop for the time being while Grenier recovers from a freak injury (hit in the face by his own foul ball) he’s continued to make his case for a promotion. Mason’s .296/3/11/.785 OPS slash line was the best among all the Shorebird hitters this month as the team’s gone into an offensive funk over the last several weeks.

While Grenier came as a top-40 selection out of this year’s draft, McCoy is no slouch either. Selected last year in the sixth round, the Iowa Hawkeye (by way of the small town of Washington, Illinois) went to Aberdeen and turned heads by putting up a .301 average in 53 games and finished among the leaders in most offensive categories for the IronBirds. So it was pretty well expected that McCoy would be ticketed for Delmarva this spring, but a 4-for-30 start has forced Mason to play catch-up for most of the season. As of Tuesday night, Mason’s solid July had pushed him up to a .255/4/37/.706 OPS for the season. However, given another 100 at-bats (very doable in the remaining number of games) Mason could add another 10 to 12 points to the average and come out looking rather good. At the time Grenier was assigned to Delmarva, Mason was among the top two league shortstops in both fielding percentage and range factor, so there’s no question McCoy sports a pretty good glove, too.

Obviously the question going forward is one of whether McCoy will be pushed aside by the guy with the fat signing bonus. Mason is already 23, and will be 24 by the time the 2019 season begins. He certainly has the glove and probably the bat to play at Frederick, and perhaps more time at second base will allow him to relax and hit better given the slow start he’s had in games he’s played there. 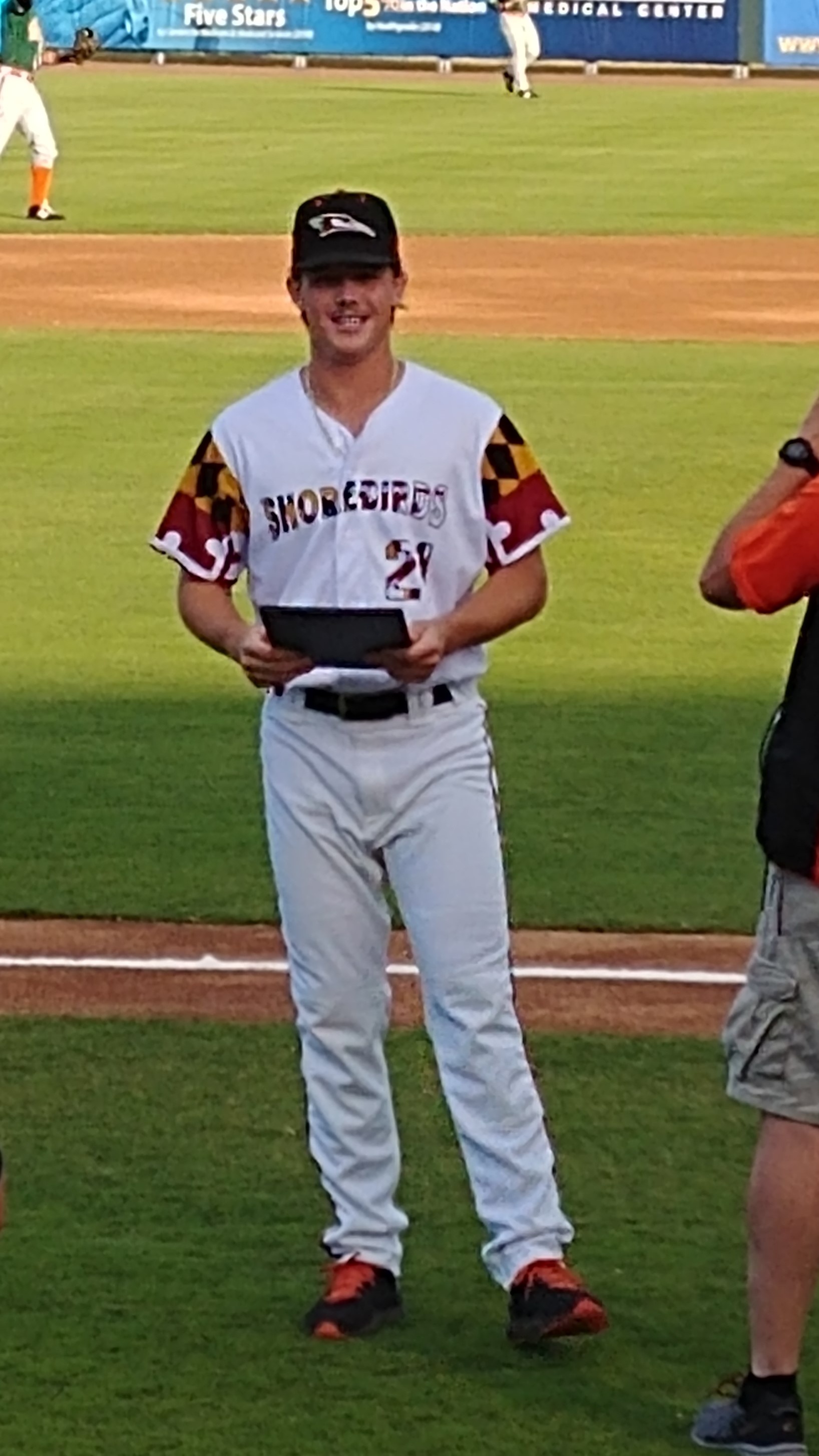 On the other hand, it’s not a question of if DL Hall will be promoted, but whether he will be in Frederick for a start or two in August. Basically the newly-selected Orioles Minor League Pitcher of the Month – joining previous Pitcher of the Month selections Zac Lowther and Matthias Dietz as Delmarva pitchers being so distinguished by the Baltimore management this season – has nothing else to prove at this level. In 26 2/3 July innings, Hall allowed but 10 hits and only two earned runs, fanning 39 while walking only 10. The month also brought his first two professional wins: while he has pitched well throughout most of his career, baseball’s scoring rule that a starting pitcher needs to complete five innings to be eligible for a win combined with the go-slow approach the Orioles had with last year’s top pick (and 21st overall) being fresh out of high school in Valdosta, Georgia meant that wins were going to wait. Until May of this year, Hall hadn’t even pitched the requisite five innings in a game as he was limited to 10 2/3 innings in five GCL starts last season. (And the numbers were rather pedestrian: a 6.97 ERA and 1.94 WHIP as he walked 10 while striking out 12. Most of the damage came in his last start, though.)

So it was a bit of a surprise that DL (it stands for Dayton Lane, but I’m sure only his mom calls him that when she’s mad) skipped over Aberdeen to full-season ball at the age of 19, although he was likely among the oldest in his graduating class as a September baby. It’s not a common jump, and for a short time it appeared the naysayers could be correct: through his first 10 games Hall was 0-4 with a 4.28 ERA. His peripheral numbers were pretty good at that point: a 1.43 WHIP came from the somewhat high rate of walks (18 in 33 2/3 innings) but given his struggles in late May and early June it would have been no surprise to see Hall reassigned to Aberdeen when their season began. But DL stayed and now has taken the SAL by storm in his last several starts – in the season’s second half Hall has pitched no fewer than 4 innings in a start but allowed 3 or fewer hits each time. The highlights of that run: 5 2/3 no-hit innings against Hagerstown July 5 (a game where the Shorebirds threw 9 no-hit innings yet managed to lose in the 10th) and a six-inning, 10 strikeout performance at West Virginia two starts later. That game snapped a three-start scoreless streak for Hall, however.

In watching Hall’s last start of the month on Tuesday night, it was apparent that not all of his pitches were working. But against a reasonably well-hitting Lakewood team, DL showed that he could pitch effectively enough without his best stuff: no clean innings out of the four, but no runs either. When needed he came up with the pitches to get out of the jam, and that’s the sign of a pitcher ready to move up.

I noted up top that this month was not the slam dunk I thought it would be in picking players. Making late surges for position player of the month were outfielder Will Robertson and June winner Branden Becker, while on the mound newcomer Max Knutson was being just about as dominant as Hall, but in a relief role. Knutson was unscored upon in his first nine July innings before yielding a run to Lakewood on the 30th.

With the Shorebirds slipping out of the divisional race thanks to an ill-timed Perdue sweep at the hands of the league-leading BlueClaws, there may be a plethora of player moves as the season winds down. It could be a wide-open field for the final Shorebirds of the Month and eventual Shorebird of the Year.