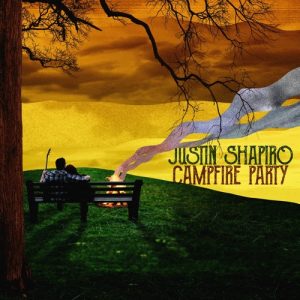 Everyone has a musical sweet spot, and great albums will gravitate toward it.

It took me listening through a nice, country-flavored opening track called Lost In Time for Justin Shapiro to find mine. There’s something about Mr. Bluebird that brings me back to the great southern rock bands of my youth like The Allman Brothers or Lynard Skynard. Justin proves that particular vibe is still viable four decades later with that song.

Even better is the sense of humor Shapiro exhibits on the next track, Tyrannosaurus Rex, which also features a catchy chorus and bridge.

Let me say this, though: out of an album of 11 tracks, it’s a bit unfortunate that Justin selected one of the weaker songs as his opening single. Brighter Days isn’t a bad song by any estimation, but I didn’t find it as representative of his work. Luckily, it rolls into the great hard-rocking track Inspiration Nation. (Now that’s a song worth putting out there so people can blare it from their speakers. Kids who shake their cars with the thump of unrecognizable rap music don’t know what they are missing.)

Another great message song follows this up, the slower and rather seductive Forgive & Forgotten. Somehow I can see that one being extended into a ten-minute jam in some club somewhere, the girls swaying up front and the guys standing in the back enjoying the jam. (Shapiro did this with a three-piece band – perfect for clubs.) That same groove inhabits the (lengthy) next song, My Own Way, although the brief bridge toward the end in that one is a bit unusual and doesn’t quite fit – but the fade works very well.

For the first couple bars of If You Wanna Wake Up! you may debate whether it would perform better on the country or pop charts, but it quickly settles into another straight-ahead rock winner. By the same token, the opening of Human Hurricane defines that song as it has a nice bass line throughout. (It’s the one you may not be able to play at work because there’s an f-word in the chorus.)

If you like the ballads, the end of the album is your best bet: Stand is a tribute to Justin’s father, while the title track closes the album with that same country flavor the album started with. Campfire Party closes out the album and it’s the same type of song that he could close a show with – there is a sort of finality to it that means he put the song in its proper place. Justin had the good sense to only co-produce this effort, which cut down on the excesses which often occur when an album is self-produced.

Since I listen to the album before I read the bio, I didn’t know that Justin and his band hail from and play around the Washington, D.C. area, so there’s a decent chance he may bring his band over this way to share a campfire party of their own. I would encourage you to check out his website as well.

As I said up top, this is one that hit my sweet spot. Don’t be surprised to find this one in my end-of-year top 5.