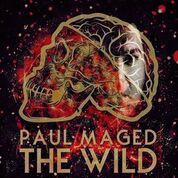 Back in 2014, the first year I did monoblogue music, you may recall that Paul Maged’s release “Diamonds & Demons” was my pick for the best album I reviewed during that year. When I did the review I noted, “(T)his is perhaps the best example of straight-ahead rock and roll I’ve come across.”

So when I got word that Maged had put out a new single last week, I was pleased to get the opportunity to take a listen. In “Diamonds & Demons” Paul had a nice share of songs that were somewhat harder and edgier, and this is the path he’s chosen on “The Wild.” As Maged writes, it’s a single that “bridges his last album and his forthcoming album.” Assuming this is so, we may not have to wait a very long time for the new music: according to a Tweet Maged put out on February 20, he is working on the eighth song for the album, a tune he described as “quite Beatlesque.”

So what did I think of “The Wild”? Yes, it’s very edgy and it does rock out. I think some may quibble that he oversings it just a little bit, but bear in mind that he describes the song as one “in which he dives in head first to explore the mind and the brain at the exact moment we lose control; the state of anger and despair we reach when we lose command of reasonable thought.” In that context, being a little frenetic is good and I’m sure he will tone it down for the ballads and pop-rockers he will surely feature on his forthcoming release, whenever it comes out.

Because Paul put out a music video simultaneous with the release of the single you don’t have to take my word for it but you can listen for yourself.

So I’ll have to keep an eye out for the next Maged album to see how it stacks up. While I don’t consider singles for my top 5 end-of-year list, if this single is any indication of how the album will be my take would be so far, so very good.