July was a month where the Shorebirds marched through Georgia like William Tecumseh Sherman, compiling their first perfect two-stop road trip in at least 12 years and coming home in first place. Unfortunately that lead has melted away like a gallon of ice cream left out in the sun, but the Shorebirds are enjoying unexpected success due in large part to the players honored here this month.

While Jake Ring took home honors in April, it was his two usual counterparts in the outfield, Cole Billingsley and Ryan McKenna, who were vying for the Position Player of the Month honor in July – seemingly trying to outdo each other at every turn. Billingsley was hitting an even .250 when the calendar turned to July, but his hot month improved his overall average to a more solid-looking .270 mark. However, while his average has gone up Billingsley has become more of a slap hitter, with just three extra-base hits in July leading to an OPS of just .718. 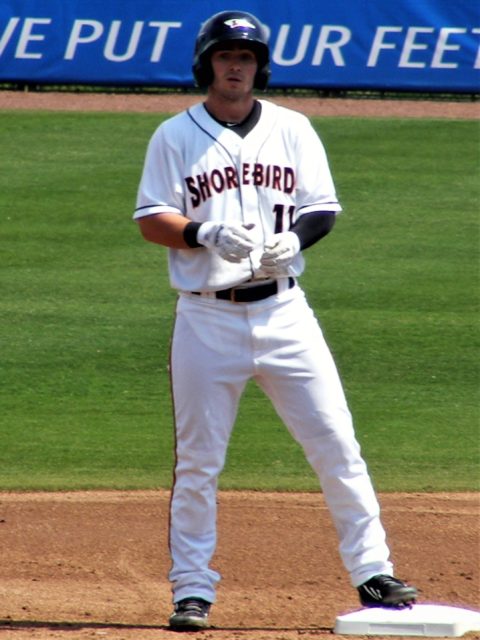 Thus, what tipped the scale to his teammate Ryan McKenna was the latter’s .319 batting average, 5 steals, and .824 OPS – by far his best of the season and way above his numbers for May and June. While Billingsley picked up his average 20 points in July, McKenna did even better by going from .231 to .254 in the month, recovering a large part of what he lost in a two-month slump. On that aforementioned road trip to Georgia, Ryan was a hot hand as he went 11-for-27 in the seven games, including four doubles. (Ryan had 11 doubles for the month.)

Ryan is an Oregon native who was drafted out of high school in New Hampshire two years ago as a fourth-rounder, so a lot is expected of him. With this being his first opportunity to play full-season ball, McKenna has set career marks in most of his categories already, but he has shown some improvement in his all-around game so he’s tracking to make the jump to Frederick next year as a 21-year-old (he will turn 21 just before camp opens next spring.)

Besides Billingsley, another batter who had a month worth noting (albeit in limited spot duty) was infielder Tanner Kirk, who brought his average up above the Mendoza Line with a little room to spare. 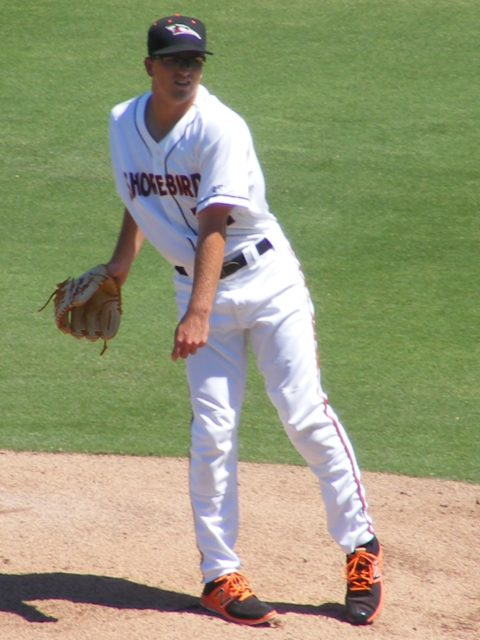 On the other hand, there was no contest on the pitching side of the equation and it netted me my first-ever repeat Shorebird Pitcher of the Month in Alex Wells.

Here are the brief lines from Alex’s five July starts:

I did not mention runs or walks because there were none. Wells has not allowed a run since June 30 and last walked a batter June 25. Brett Barbier, then of Lakewood, was the last batter to walk off Wells, and it turns out Wells’ streak has outlasted the remainder of Barbier’s pro career as he’s since been released.

In the category of “duh”, the Orioles also selected Wells as their Minor League Pitcher of the Month. So the question now becomes what will happen with him?

He’s on pace for six more starts this season, and it seems to me that as long as the Shorebirds have a chance at the postseason he should stay here. Barring rainouts, Wells is actually lined up just right to start the first game of a postseason series on normal rest. And it’s not like he doesn’t have things to work on, despite the recent success – one is a penchant for giving up the longball. (Wells has allowed 13 this season, and consider the team has given up 66 collectively.) At 114 innings, the Orioles may also want to slow his workload down as well, so he may be cut back to 5 inning starts or skip a turn along the way.

In either case, when you have an ERA of 0 and a WHIP that comes in at 0.42 for the month, there’s a pretty good chance you’ll be my pitcher of the month, again.

One more month and then we’ll line ’em up and pick a Shorebird of the Year.