After I decided to retire the Shorebird of the Week feature at the end of last season, I still felt something was in order to express my fandom and admiration. So I decided (after some thought) to do a Shorebird of the Month, then it occurred to me that both position players and pitchers should be so honored as most organizations that give awards such as those tend to do.

This award will be subjective to the point where it won’t just be based on statistics, but also on whether a player exceeded the expectations one could reasonably place on him. A good case in point was my Shorebird of the Year for 2016, Yermin Mercedes. Here was a guy who had been released by one team, went to play in the independent leagues to keep his dream alive and was rewarded by latching on with the Orioles organization. I knew he could hit based on his previous campaigns, but there were reasons to expect a so-so season from him last year: his numbers slipped when repeating a level for the third time in his previous organization, his best hitting season came in a league where hitting an even .300 would put you somewhat below the league average, and he only hit .272 the season before for the Shorebirds – quite solid for a catcher, but could he do that well a second time? He definitely exceeded my expectations by winning the SAL batting title.

I would expect a guy like Manny Machado (or Ryan Mountcastle from last year) to take the South Atlantic League by storm. And having seen enough 20th round or later picks come to this level and have their weaknesses exploited by opposing pitchers or hitters, I have a pretty good idea of what a player’s ceiling is expected to be. Go back seven years to the 2010 draft (which featured Manny Machado as the #1 pick) and you will find the Orioles drafted 49 players that season. Out of those 49 players, five made it to the majors: Machado (1st round), Parker Bridwell (9th round), Chi Chi Gonzalez (11th round), Scott Copeland (21st round), and Tim Adleman (24th round.) While Machado and Bridwell debuted with the Orioles, Gonzalez was not signed and was later a 1st round pick; meanwhile, both Copeland and Adleman were released by the Orioles in 2012 and made The Show with the teams that eventually signed them, Toronto and Cincinnati, respectively. Adleman played for two seasons in independent league baseball before the Reds snapped him up.

Just five other players from that Baltimore draft are still active in lower levels: Matt Bywater (7th round) was in the Braves’ organization and independent baseball last season, but hasn’t yet latched onto a team for 2017. Wynston Sawyer (8th round) was an Orioles’ farmhand until the end of last year, but now the six-year free agent plays in the Dodgers’ chain. Both Bywater and Sawyer have only advanced to AA ball.

The other three were high school players who opted to sign later when drafted by other clubs. Between those three active players, they have played a combined one game beyond the advanced-A level.

To make a long story short, I would be as impressed if a 35th rounder comes in and can be about league average as I would be with a first rounder hitting .380 and home runs by the bushel. There’s also track record to consider as well, since we have had many players who finally “got it” at this level and went on to be successful.

With all that introduction now out of the way, allow me to introduce you to my Shorebird Player and Pitcher of the Month for April, 2017. 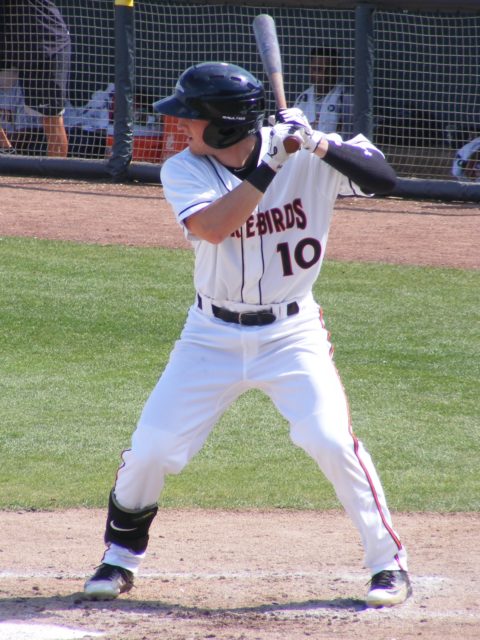 The Player of the Month is outfielder Jake Ring.

After the Shorebirds’ initial road trip, Ring was hitting just .190 (4-for-21.) But he loved home cooking so much that in the seven-game opening homestand the Shorebirds had against Hagerstown and Greensboro Jake went an amazing 12-for-17 against the Suns and 4-for-11 versus Grasshopper pitching. Folks, that’s 16-for-28, or a .571 average with a homer, 12 RBI, and an absolutely mind-boggling OPS of 1.696 – the slugging percentage was also over 1.000 thanks to a total of 10 extra-base hits.

His season-opening exploits led Jake to be named 2017’s first SAL Player of the Week, covering April 4-14. It’s a far cry from the struggles he had with Delmarva at the tail end of last year, where he began his Shorebird career hitless in his first 10 at-bats before finally breaking through in the eighth inning of the season finale September 5. He would add another hit in the 10th inning of a game the Shorebirds won later that frame, finishing 2-for-12 in the three games. The 31st round selection from last year, out of Ingleside, Illinois by way of the University of Missouri, Jake spent the previous portion of the 2016 season hitting .278/0/21 in 53 games for the Orioles’ Gulf Coast League team – but that would be somewhat expected against a league where many of the players are either fresh from high school, coming from lightly-regarded or smaller college programs, or just arrived from the even more raw talent pools of the foreign summer leagues in various countries. The SAL is probably the appropriate challenge for Ring at this stage in his career.

Looking ahead, Jake could be here for a little while barring any injuries on Frederick’s roster – their outfield complement of Josh Hart, Austin Hays, Randolph Gassaway, and Ademar Rifaela is holding its own so far. Hart, Gassaway, and Rifaela should be familiar to Delmarva fans but Hays is a 3rd rounder from last season who bypassed Delmarva in his advancement. And while Jake has slowed down a little bit, hitting “just” .294 over his last ten games, keeping himself at or above .300 should merit him both a league All-Star bid and a mid-season promotion. Since he’s still only 22, there’s not a great deal of urgency to rush him along.

While Ring was a clear winner in this field, shortstop Chris Clare deserves honorable mention as well for a great month of April. 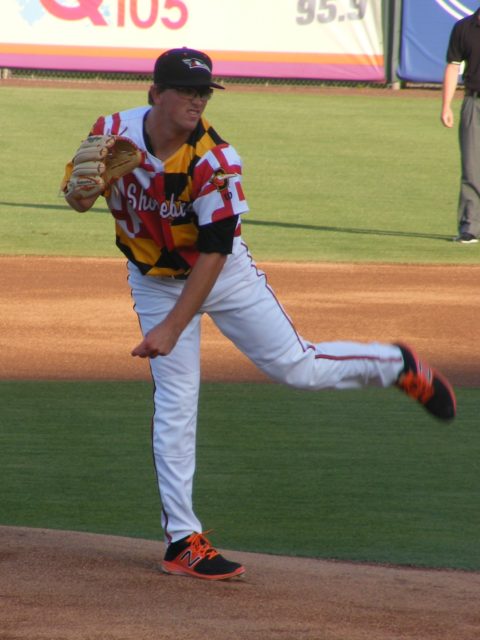 My Pitcher of the Month was a somewhat closer call, but I felt that putting together four excellent starts and being in the top five in league ERA was enough to give the nod to Alex Wells. Admittedly, I am buying a pig in a poke here because I haven’t seen either of his two home starts but so far Wells has a 2-1 record with a 1.11 ERA and WHIP of 0.945 (less than one baserunner an inning) based on just four walks and 19 hits allowed in 24 1/3 innings – meanwhile, he has struck out 20 in that stint. One thing those who attended either or both of his two home starts haven’t seen is Wells allowing an earned run – Lakewood scratched out an unearned run against him but Hagerstown was shut out.

Unlike Ring, Alex was challenged in his first pro season as he debuted last year with Aberdeen, going just 4-5 but with a 2.15 ERA in 13 starts there. Wells also has a more intriguing backstory as an Australian native whose twin brother Lachlan Wells pitches in the Minnesota Twins organization. (Somehow that fits, I suppose.) With one more season under his belt, Lachlan is pitching one level higher than Alex right now but they have very similar statistical profiles: low ERA, great strikeout/walk ratio, and capable of putting together fine games. In the case of Alex, all of his game scores (a statistic created by sabermetrics guru Bill James) are over 50, and two are over 65, suggesting a high-quality start. (The formula is somewhat cumbersome to explain, but a start that would match the minimum baseball definition of a “quality start” (3 earned runs or fewer in 6 innings or more) would net about 55 to 60 points, or an increase of 5 to 10 points over the 50 given to start. An absolutely perfect nine-inning game with 27 strikeouts would be 114 points, and the record for a nine-inning game is 105. Wells has a high score of 72 for his start at home against Lakewood (6 IP, 1 unearned R on 2 H, 6 K’s, no walks.)

Signed by the Orioles at the very end of the 2015 minor league season (and about 9 1/2 months after Lachlan), Wells was named as both an organizational and NYPL Midseason All-Star last season, all before he reached the age of 20. Baseball America also selected him as the 20th best NYPL prospect and 25th best Orioles prospect. The bespectacled Wells (both brothers wear glasses) has now pitched a total of 18 games for the Orioles’ brass and has started every one, compiling an overall ERA of 1.86.

So Wells has a pretty high ceiling, although one could definitely argue he’s simply meeting expectations. If he tracks as his twin brother did at this level last season, one could expect Alex to finish with a sub-2 ERA and stellar peripheral numbers such as WHIP and strikeout/walk ratio. While he has the potential to be moved up midstream, the Orioles can afford to take the time to develop Wells given their blue-chip young guns already in the rotation (although a left-hander would be a good companion to right-handers Dylan Bundy and Kevin Gausman.) If the rotation and weather cooperate, the next time Wells should pitch here would be May 13 against Greenville.

Two pitchers who will get an honorable mention for beating expectations in their second tour of duty with the team are Steven Klimek and Jhon Peluffo. Both – but especially Peluffo – were batted around in their first stint here but have recovered nicely to start 2017.

With that, welcome to this new chapter. It will be more in-depth than a weekly look at one player, and the next one on the schedule would be June 8. The first Thursday in June is the 1st, so I’m creating the rule that these players of the month will be featured the Thursday after the first Monday of the month – it gives me time to digest the previous monthly splits and see who is deserving of the honors.