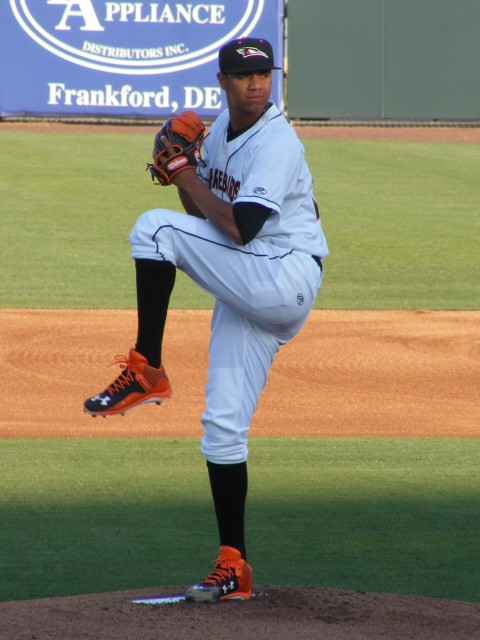 After throwing six innings of one-hit ball at Hagerstown on July 2, you would have thought the Suns could adjust to Ofelky Peralta when they faced him again just six days later on the Shorebirds’ home field. Instead, they became a note in history as Peralta threw a five-inning no-hitter against them in a rain-shortened 5-0 win. It was the third no-no in the Shorebirds’ 21-season run but the second in less than a calendar year – my 2015 SotY John Means threw a seven-inning gem last July 31.

In just looking at his stat line, though, you would think Peralta an odd choice to advance to Delmarva so quickly. Signed as a 16-year old from the Dominican Republic, in his two pro seasons (one in the Dominican Summer League, the other in the Gulf Coast League) Peralta was a combined 0-6 with a 4.04 ERA in 69 pro innings (21 appearances/20 starts.) While he had struck out 64 in that span, he had walked an alarming 56 batters, giving him a 1.51 WHIP overall. (As a comparison, league average is about 1.3 and elite pitchers squeeze the number under 1 on a consistent basis.) And with the Shorebirds, that issue has improved but not completely gone away: 42 free passes in 75 2/3 innings is still rather high but the improvement has brought his WHIP down to 1.36 this season.

But Ofelky has also been able to elude bats over his career, with his last two starts a prime example. In his 144 2/3 career innings, Peralta has allowed only 109 hits so batters are having a tough time squaring him up. That may be the reason he made the jump over Aberdeen, advanced to a full-season league where there have been only 12 plate appearances by batters younger than he (compared to 306 for older players), and was considered Baltimore’s #14 prospect. If you read between the lines of milb.com’s account of the no-hitter, it’s apparent that Peralta just has to work on the maturity to harness the talent – or as manager Ryan Minor put it, slowing down the game for him. Despite the last two great performances, he is still just 5-4 with a 3.45 ERA for the season here.

Because Peralta has been working with the Shorebirds’ staff so closely this year, he may not be advanced to Frederick as quickly as other prospects would be. Oftentimes there is an innings limit placed on younger prospects working their first full season, so the development may be better for Ofelky to stay here rather than get at most 10 starts at the next level. He’s a better candidate to make a mid-season jump between Frederick and Bowie next year than be advanced this season.

So the test of his maturity will be over the next couple starts: he faces the Columbia Fireflies on the road tonight (a team he hasn’t pitched against, as we only see them once this season) then his turn would next fall at home against Hickory. The Crawdads beat Peralta up on June 19, a game he allowed six runs and ten hits in 4 2/3 innings. Ofelky didn’t have to adjust much in beating the Hagerstown Suns, but these two starts will help define his season as it moves on.