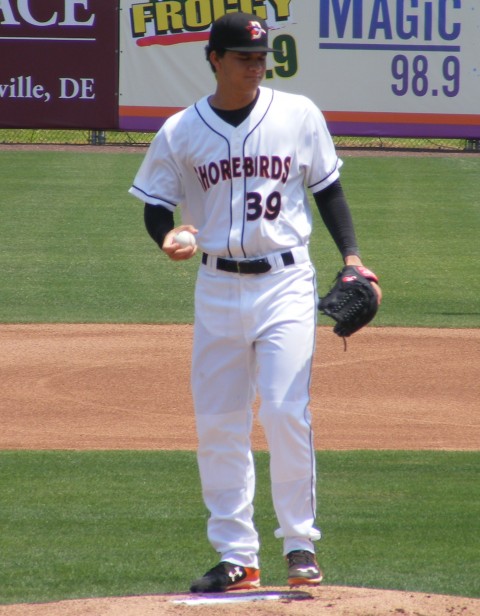 Selected as both the SAL Pitcher of the Week and the Orioles’ Pitcher of the Month during the last week, it wouldn’t surprise me to read the agate type in the next few days and find Christian Alvarado has been promoted to Frederick – or even packaged as a rising prospect in a deal to find the Orioles some major league pitching help.

Alvarado has achieved these accolades in part by being the league leader in strikeouts (the first SAL pitcher to eclipse 100 K’s this season) to go with a team-leading seven wins. He’s 7-4 in 16 starts, covering 87 1/3 innings and has a 3.19 ERA to go with a 1.13 WHIP. Having an almost absurd 17 walks to go with 101 punchouts significantly helps his cause as well.

Like most Latin American players who are signed by the Orioles, Alvarado – who was inked to a deal a month before his 17th birthday in August, 2011 – began by leaving his native Venezuela to pitch in the Dominican Republic. After two seasons of improvement, Christian flat-out dominated the DSL in his first three 2014 starts (allowing just one run in 25 innings) and earned a promotion stateside to pitch in the Gulf Coast League. Last year he started in the GCL but moved up to Aberdeen after pitching 27 innings without issuing a walk, and now he’s pitching with the Shorebirds at the age of 21. Starting his career so early and finding success at this level may mean Alvarado is promoted to the 40-man roster to protect him over the winter.

It’s obvious Christian’s success comes from the sweet spot of pitching – having the control not to walk batters (just 73 in 325 career innings, or roughly 2 per nine innings) but the power stuff to strike them out at an overall rate of over one per inning this year. Looking over his career stats, perhaps the only pedestrian stretch he’s had was his initial GCL stint, which can be somewhat explained away by both an improved level of play and the personal transition of pitching in the U.S. for the first time. But he easily conquered that level once he got acclimated, and Alvarado has made easy work of transitioning to full-season play.

So come out and enjoy some power pitching from Alvarado while you still can.