Whenever there is a new record set, whether rain, hurricane, drought, etc., those in the climate change alarmist camp seem to be quick to point to global warming as the cause and make more dire predictions regarding the future – even when there are other documented reasons and even when hard data (not models) disputes the claim. Such is the case with Lake Mead. On May 20, the federal Bureau of Reclamation announced that the nation’s largest reservoir, located near Las Vegas, NV, reached an all-time low. The current level slipped below the previous record set in June 2015.

Despite reports of the mismanagement of the important water resource, USA Today responded to the news by proclaiming: “Due to a long drought and climate change, Lake Mead’s water levels continue to fall.”

Brad Udall, a senior water and climate research scientist at Colorado State University, and brother to former Colorado Senator Mark Udall and cousin to New Mexico Senator Tom Udall, declared: “This problem is not going away and it is likely to get worse, perhaps far worse, as climate change unfolds.” According to the Desert Sun, he added: “Unprecedented high temperatures in the basin are causing the flow of the river to decline.”

Udall previously stated: “Climate change is water change. The two go hand in hand. Heat drives the water cycle. …You have to invoke temperatures to explain the current drought.”

Back in 2010, the Smithsonian magazine, cites Udall when it says: “Climate change will likely decrease the river’s flow by 5 to 20 percent in the next 40 years. … Less precipitation in the Rocky Mountains will yield less water to begin with. Droughts will last longer. Higher overall air temperatures will mean more water lost to evaporation. Udall said: ‘You’re going to see earlier runoff and lower flows later in the year’ so water will be more scarce during the growing season.”

While Udall’s statements are dramatic and coincide with the climate crisis narrative his better-known family members espouse, they do not, according New Mexico hydrologist Mike Wallace, reflect actual temperature and stream flow records in the Colorado River Basin. (I highlighted Wallace’s work on ocean acidification in December 2014.)

Both Wallace and Udall claim to be experts in the hydrology and climatology of the western U.S. Wallace has more than 30 years of experience in the field. He is currently working on his Ph.D. in nanosciences at the University of New Mexico. Under his advisor solar physicist Harjit Ahluwalia, Wallace researches solar connections to the earth’s climate with an emphasis on hydrology – the topic of his dissertation. Udall’s undergraduate degree is in engineering and he holds an MBA from Colorado State University.

However, Wallace told me: “I’m the only hydrologist who is publishing moisture and temperature forecasts in reaches of the Upper Colorado River, years in advance, with consistently high accuracy.”

Regarding Udall’s comments in the Smithsonian, Wallace, who looks at streamflow records going back to the early twentieth century, finds that streamflows have actually been going up in recent years – correlating to ocean and solar drivers.

Wallace, who counts the city of Santa Fe as one of his forecasting business clients, pioneered the discovery that moisture patterns in his area of study – which overlaps Udall’s – are deeply anchored to ocean indexes and sunspot numbers. He boldly asserts: “There is no correlation of CO2 emissions history to the moisture time series that I have evaluated. Also, for the same stations that I review there is little or no correlation of temperature to streamflow. Rather, ocean drivers can account for changes in temperature and moisture in this region, and those drivers appear to be driven themselves by solar cycles.”

While Udall believes temperatures are rising and causing reduced streamflow into Lake Mead, Wallace disputes the premise. Wallace says he has three years of successful forecast exercises to back up his claim that, in his study areas, “temperatures are hardly trending in any direction and, in any case, those temperatures are not correlating to streamflow.”

Wallace’s work focuses on streams charged by high mountains – above 9000 feet. His study regions include many of the tributaries of the Colorado River such as the San Juan River and the Green River – both of which are sourced in the Rocky Mountains. He says: “There haven’t been any unusually low streamflow rates or unusually high temperatures in my area of focus. In fact, flows are going up, not down, compared to two and three years ago and some temperatures are actually trending down over the same recent time frame.” 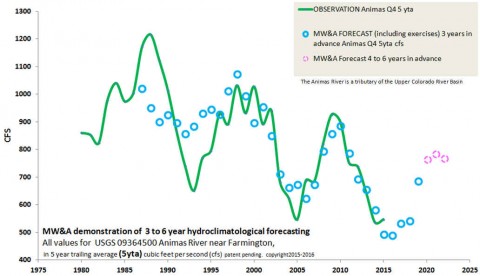 Using his proprietary method (patent pending) with more than 200 accurate forecasts, and applying to areas near the nexus of the Upper Rio Grande and the Upper Colorado Rivers, Wallace is projecting 3-4 years of generally increased water flows, followed by 3-4 years of generally decreasing moisture (drought). He posits that his innovations help municipalities, flood control authorities, irrigation districts, and resource management agencies better plan for future moisture and temperature conditions.

An example of real science at work without political interference, Wallace explains: “Research suggests that as the Sun’s radiant energy increases and decreases in sync with its sunspot cycles, the planet’s hydrosphere (all of the water) responds accordingly.  Others have suggested this, but I’ve taken that several steps further. First, I’ve discovered reproducible, high correlations between sun spot numbers and a few key features of Earth’s climate.  Second, I’ve developed a series of unique calculations, which additionally consider global hydroclimatological patterns, the site location and elevation, and latency effects, to produce my forecasts. A majority of those forecast exercises have turned out to be far more accurate than any competing method, including any or all of the global circulation models (GCMs) endorsed by the UN IPCC – which I believe is what Mr. Udall must be using for his assertions.”

Wallace has written and presented several papers on his discoveries. But he continues to experience resistance from major peer-reviewed journals to publish any of his findings. The troubles likely lie in his demonstrations that emissions are uncorrelated to climate in his study regions. In any case, scientific papers are often considered as precursors to actual applications, and Wallace already has a working, proven application. Even without peer journal-publication panache, Wallace is receiving steady and growing recognition from the hydroclimate community. In April, he was an invited presenter to the 30th Annual Rio Grande Basin Snowmelt Runoff Forecast Meeting, sponsored by the USDA SNOTEL network and attended by top regional hydroclimate scientists from agencies including the National Weather Service (NWS), the U.S. Geological Survey (USGS), and the National Oceanic and Atmospheric Administration (NOAA).

If Wallace is correct, and he has a successful climate forecast record to back up his projections, Udall can’t also be right. Wallace believes most of Udall’s climate assertions, such as the claim that regional temperatures explain everything about the drought, are too simplistic.  He also expresses concern regarding Udall’s use of the term “drought.”  “To accept those Lake Mead statements as factual,” Wallace said, “anything short of an epic flooding event, must be an epic drought event.”

After all is said and done, the natural processes that Wallace has distilled down to a working forecast system, don’t, in any way, appear to fit the crisis narrative that the Udall and many climate “authorities” perpetuate. You should ask if we really need more funding, bigger departments, and greater public anxiety to fix something that, at least, in the western U.S., appears to wholly be explained by natural cycles.

(Wallace’s forecasts, profiled at www.abeqas.com, provide a sobering perspective—perhaps an antidote to the ongoing “drought” hysteria.)

The author of Energy Freedom, Marita Noon serves as the executive director for Energy Makes America Great Inc., and the companion educational organization, the Citizens’ Alliance for Responsible Energy (CARE). She hosts a weekly radio program: America’s Voice for Energy – which expands on the content of her weekly column. Follow her @EnergyRabbit.