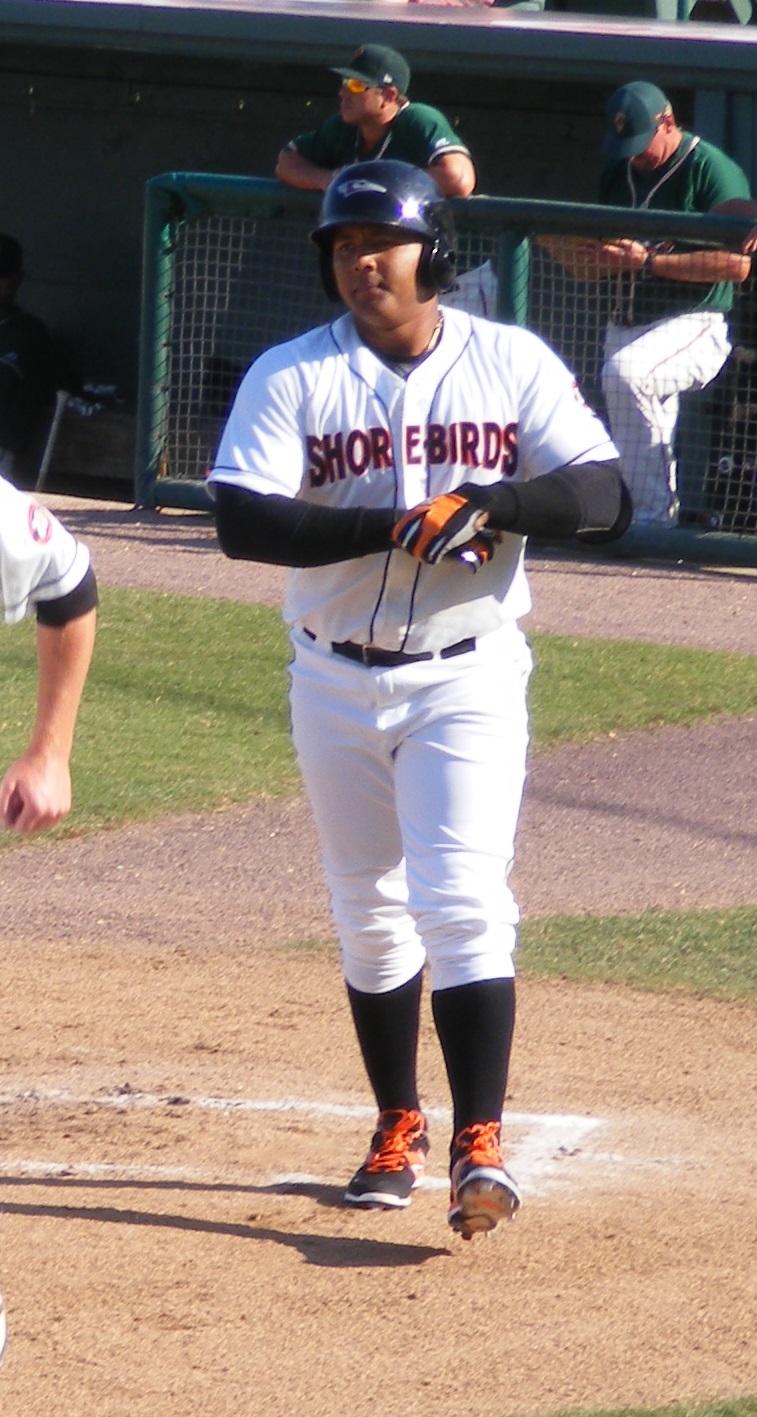 Lately this has been a familiar position for Yermin Mercedes – getting congratulations for yet another home run blast. (This particular one occurred Sunday, erasing an early 1-0 deficit and providing the first three Delmarva runs in a 16-6 blowout of Greensboro.)

And it’s a tale of taking advantage of an opportunity as a player chases his dream through the lowest of the low rungs of the minor leagues. Once the property of the Washington Nationals, where Mercedes hit .296 in 123 games over three seasons for their Dominican Summer League team, Yermin wasn’t through when the Nationals cut him loose after 2013. Instead, he traveled to the U.S. and latched on with the Douglas Diablos of the Pecos League, an independent loop based in Texas and the Southwest. It was a bizarre 2014 season as Mercedes played with three teams in two leagues: Douglas and White Sands of the Pecos League for 54 games and the San Angelo Colts of the now-defunct United League for six.

All told, the numbers were eye-popping: a .380 average with 17 home runs, 74 knocked in, and a 1.119 OPS. It’s worth noting, though, that these are not pitching-rich leagues: the aggregate Pecos League average last year was .314 with an .852 OPS. Regardless of the quality of the league, by season’s end Mercedes had the first step on his path complete as the Orioles inked him to a minor league deal last August 28 for the 2015 season.

But the story gets even better. Delmarva looked to be set at catcher with Alex Murphy and Jonah Heim, both high draft selections in 2013 who were ticketed for the Shorebirds. Unfortunately for them, the duo has only caught 43 games as both have been sidelined by injury. Heim’s injury in late May paved the way for Mercedes to replace him, and Yermin has hit as one may expect with a .291/6/25/.887 OPS slash line in 32 games.

Yermin’s been in the pro ranks since 2011 but the Dominican native is still only 22 and has played a little bit of first base and third base in his career, along with three innings of mound duty last season.

And he’s been a one-man wrecking crew in the last week: along with his three-run smash against Greensboro that reversed the early deficit, last Thursday he hit a grand slam in a 7-4 loss to Lexington after a 3-run blast in an 11-3 win the night before. Not only that, his 2-run 9th inning triple tied the homestand finale against Greensboro Monday before he scored the winning tally in that 3-2 victory and last night he knocked in the first of the two runs Delmarva beat Charleston with, 2-0. In seven games he has three home runs and 14 RBI.

Add in the fact he’s caught 38% of would-be base stealers (after posting close to 50% in the DSL) and you may wonder why the Nationals didn’t keep him around. The Orioles are probably glad they didn’t.