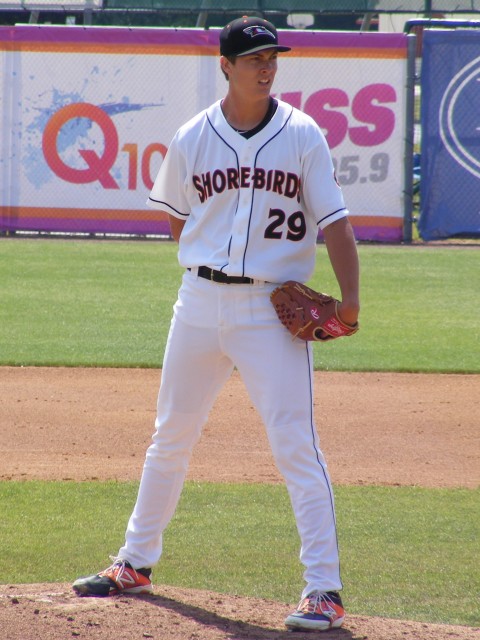 After a very shaky start, this season’s been an uphill climb for Matthew Grimes. Tagged with an ERA that flirted with double-digits after the first couple starts, he began whittling it down in earnest upon an April 28 start in Savannah that saw him allow just one hit in five innings while fanning 11. Even as he was roughed up a little in his last start at Hickory, most of the runs he allowed were unearned so his ERA dropped to a season-low 4.57 to go with a 3-2 record.

Matthew is an interesting case – drafted out of a Georgia high school by the White Sox in the 4th round in 2010, he instead chose to go to Georgia Tech. Grimes was drafted again in 2013 by the Phillies as a 31st rounder and finally the Orioles picked him up in the 18th round last season. One could argue he left a lot of money on the table, but obviously college was important to him and Matthew is still on track development-wise as an older 23-year-old at this level (he will turn 24 just before season’s end, on September 4.)

With Aberdeen last season his numbers were pedestrian – 1-3 with a 5.32 ERA in just 22 innings spread over 10 appearances (five starts.) The Orioles used him very gently as none of his outings lasted over three innings, so stretching him out as a starter this season is a little surprising. So far in 2015 his longest outing has been 5 2/3 innings at Augusta; however, Grimes has consistently turned in five or more innings. Just one of his last seven starts has gone fewer than five frames and that was a four-inning start at home, also against Augusta.

If there’s a knock on the Grimes resume, it’s that he tends to give up a lot of hits: 57 in 43 1/3 innings so far this season, leading to a WHIP of 1.62. It’s surprising because he has strikeout capability, having fanned 40 vs. 13 walks in those 43 1/3 innings. Naturally, the cat-and-mouse game is on; as the league adjusts to him Matt will have to refine his offerings.

My suspicion is that Grimes will become more of a reliever as his career progresses, as he seems to do better facing batters just once. But he may surprise us and become a pitcher who misses bats more often in the second half. There was a lot of promise for Grimes out of high school, so we’ll see if that hype was well-placed or not.