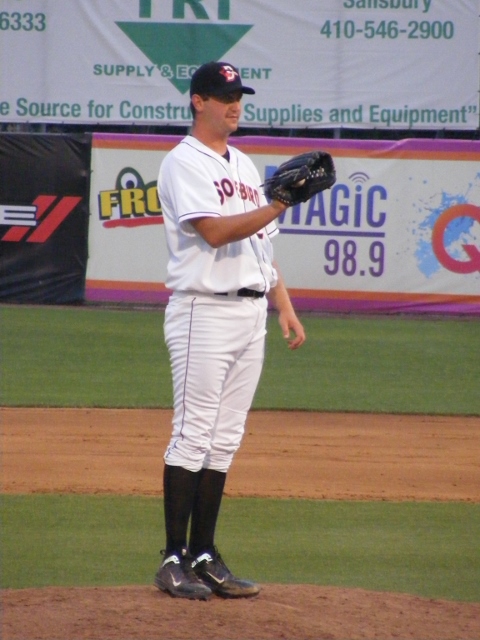 A few weeks back, I noted a pitcher who went from being a mediocre starter to an effective reliever. This week’s honoree went the opposite direction, becoming an effective Shorebird starter over the last half of the season since being elevated to the Shorebirds June 4 from extended spring training.

But Bennett Parry has been dominating of late, unscored upon in his last two starts against Kannapolis and Lakewood, a stretch covering 12 1/3 innings. In those two starts, the first of which gave Parry his second win of the season, he’s allowed just eight hits and three walks while fanning nine.

The tall 22 year old lefty, an afterthought in the 2011 draft as a 40th round selection out of Cal State-Northridge and the San Diego area – his alma mater Poway High School is famous baseball-wise for graduating the offspring of two famous Padres: Gary Templeton and Tony Gwynn – has impressed as a starter, pitching to a 2.10 ERA in seven starts coming into tonight’s game at Greensboro where he will take the ball once again. Conversely, as a reliever his ERA is a more pedestrian 4.41 in 16 1/3 innings. Parry has allowed 18 hits and has an 18/8 strikeout/walk ratio as a reliever, but improves to 26 hits allowed in 35 innings as a starter with a 30/10 strikeout/walk ratio. More telling, his WHIP as a reliever is 1.59 but declines to 1.03 as a starter. That’s one fewer baserunner every two innings, which leads to a marked difference in ERA.

So far in three professional seasons, though – and this includes two brief appearances with the Gulf Coast League Orioles in 2011 – his highest ERA is 2.84 and that’s where he stands right now. Bennett pitched to a 1-4, 2.70 ERA between the Gulf Coast League and Aberdeen last year, and has kept up relatively similar success with the Shorebirds. He’s kept racking up strikeouts at a pace of about one per inning, although his most recent two starts were slightly under that mark.

Certainly Parry can be useful as a lefty starter, and his body of work over the second half of the season makes him a contender for Frederick’s starting rotation next season.