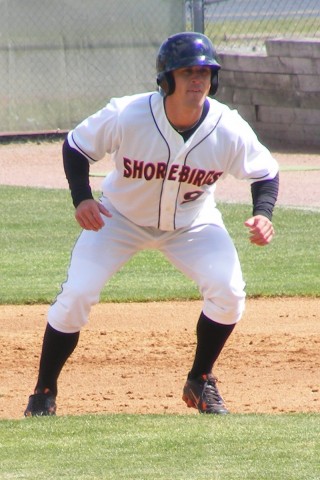 As my Shorebird of the Week feature enters its sixth season tonight, it’s without precedent that a player I selected as a Shorebird of the Year makes a return trip to Delmarva. But indeed Brian Conley is coming back.

I picked Brian as my SotY because he had a relatively good season of enough length to establish a body of work. He hit .270/6/29 for Delmarva last season in 98 games (for those new to Shorebird of the Week, the stat line is shorthand for batting average/home runs/runs batted in.) Brian also showed a discerning eye at the plate, walking and striking out an even 70 times apiece – normally the ratio at this level runs about 2 strikeouts per walk, or more. The performance from the 17th round 2008 Oriole draft selection out of Towson University was good enough to earn him a late-season promotion to Frederick.

Unfortunately, that Carolina League casting call wasn’t reflective of Brian’s Delmarva success. In 16 games and 45 at-bats Brian hit just .222 with a homer and 4 RBI. Perhaps that’s the reason he regressed to Delmarva this season, but he along with Kieron Pope will lend a veteran presence to a team which has its share of young stars. Since Brian turns 25 on May 7th, his role may have become one of mentor to several up-and-coming prospects rather than potentially joining Adam Jones and Nick Markakis in Camden Yards.

But the fan favorite will begin his third season at Perdue Stadium with a chance to help the team improve on last year’s 59-81 record. Look for Brian to hold down a corner outfield spot and be penciled into the lineup on a regular basis.