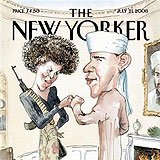 When word got around about a magazine cover depicting Democrat Presidential candidate Barack Obama in Islamic garb and his wife Michelle, armed like a terrorist, doing a celebratory fist bump in the Oval Office as an American flag burns in the fireplace, obviously the Obama campaign was none too thrilled about what The New Yorker magazine termed a “satrical” cover for its July 21st issue. Howls of protest have come from others on the left side of the aisle as well.

Never mind that many of those protesting have characterized current President George W. Bush as everything from “Bushitler” to American terrorist to devil incarnate, when you pick on one of their own all is no longer fair in love or war.

More to the point, the cartoon by Barry Blitt is almost assuredly going to make this particular issue of the staid magazine that few in middle America have heard of, much less read, an instant hit. Despite their leanings far to the left, one has to assume that The New Yorker does operate under the profit motive and if a controversial cover helps move a few thousand extra issues that’s great for the bottom line. Let’s face it, we’re not talking about Playboy here so most regular readers are subscribing to the tome for the articles.

And perhaps what may have made those on the “progressive” side a little less hysterical about the Obama cover is if they placed it as part of a thought bubble, one which eminates from a redneck Southerner leaning on his pickup truck, gun rack and Confederate flag window decal in full view. Maybe for full effect they could put a NASCAR sticker on one side of the bumper (perhaps a #3 with wings) and a sticker of some sort proclaiming the driver is a dittohead on the other. It sounds a little busy for an average-sized magazine cover so perhaps just the part with Barack and Michelle Obama made the cut.

Rush Limbaugh is correct when he regularly opines that good comedy has an element of truth in it. What makes this cover so believable is that many Americans do look at Obama in just such a manner – witness the hullabaloo about his middle name or lack of a flag pin on his lapel until some of Barack’s most recent appearances. Throw in some of Michelle’s comments and it’s easy to see why this perception dogs both Obamas.

My contention is that this is yet another distraction from the real issues that separate Obama from GOP standardbearer John McCain – their differing stances on the Long War and negotiating foreign policy, McCain’s recently conversion to the concept of energy independence through drilling for our own oil in most areas rather than forced conservation and the far-off technology of alternative fuels, and the wallet-straining ambitions of an Obama presidency versus the more fiscally conservative John McCain are but three examples.

While I wouldn’t go so far to say that The New Yorker‘s cover is a calculated move in reverse psychology by the Obama camp, it does serve to establish yet another divide between perception and reality as far as GOP voters go, subtly branding those who would vote against Obama as racist, sexist, xenophobic, or a combination of the three. Personally, I don’t give a damn that Barack Obama is half-black, I just happen to think his policy ideas are half-witted.

Crossposted on Red Maryland and That’s Elbert With An E.