The other day I posted about hard decisions because so many good bands were playing the next two weekends. Well, weekend number 1 is history now and I ended up going to two shows.

Originally I wasn’t going to go out on Friday night after bowling but I had two strokes of good fortune happen while I was up in Seaford “heaving the rock.” First of all, we were one bowler short as the lady on my team had to babysit – so my team had only two bowlers and we were finished rather early. The second piece of luck occurred when I finally won our 50/50 drawing…geez, been in at least one bowling league a week for almost two solid years and I finally won once. While I need to win it probably 3 more times the rest of this season just to get to break even, the extra cash in my pocket and being finished so early made me decide to go ahead and check out Barking Crickets on Friday night. 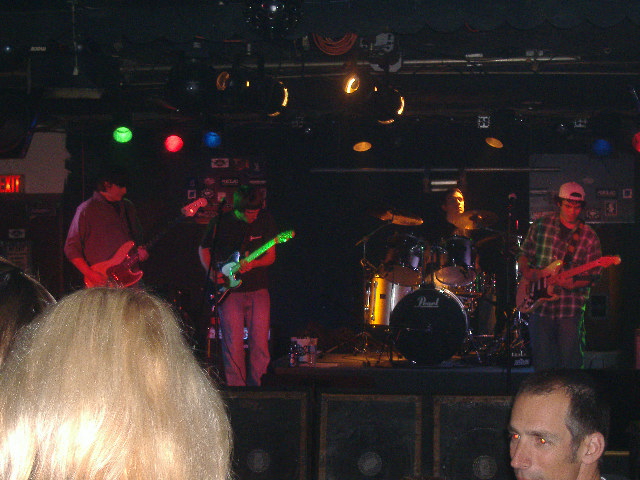 And these guys put on a pretty good show in front of a reasonably packed house. Interestingly enough, I was led to believe by observation that the blonde lady who’s in my shot (lower left, you can’t miss her) is the mother of one of the band members. I think at least a couple sets of their parents were present and that’s pretty cool.

Usually when I know I’m going to go see a band, I’ll go to their Myspace site and listen in on the songs they put up (most bands put up 1-4 songs on Myspace to listen to and occasionally they’ll allow downloads.) While I added the BC link to monoblogue on Friday I didn’t stop to listen to their stuff because I didn’t plan to hit their show that night. So I went to the Cactus Club and got to listen to them live first, which made things a bit different. Their sound is more along the lines of alternative rock, which I can get into.

Because they were the only band playing, BC did need to fill up some of their show with cover songs. The three that I thought were best were their versions of “Superman’s Dead” (Our Lady Peace), “Seven Nation Army” (White Stripes) which was BC’s finale, and the Buffalo Springfield classic “For What It’s Worth”. So I’m sure someplace along the line I’ll check Barking Crickets out again, they put on a pretty good show. Next week they’ll be one of the bands at the delmarvanightlife.com 2nd Anniversary Party at Brew River so it’s a crack at checking these guys out there.

On Saturday night I drove back up to Seaford to see Semiblind again. I’d seen them at the X106.9 Spring Luau last year and liked their set at that show, so I decided to go see them again. Well, this is another good reason: 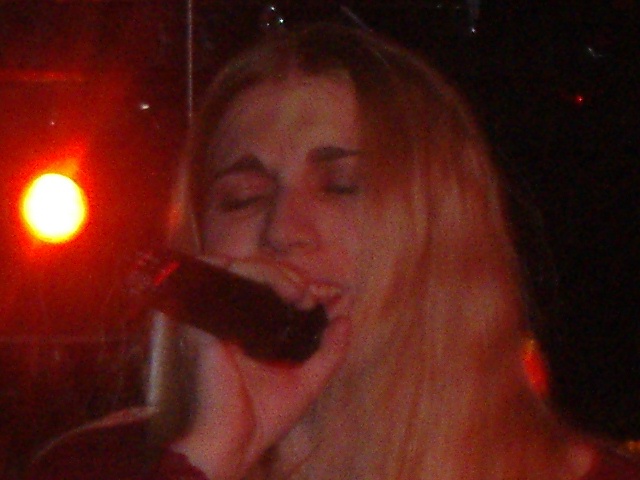 This is Michele and she’s the co-lead singer. And boy she can sing. (The pic’s a little fuzzy, since I cropped it from a much larger shot.) It’s especially apparent on their original songs that she has a sort of smoky, sultry voice – not really a pop music style that most female singers would be associated with. One thing I really like about Semiblind is the vocal interplay between her and Jim, the guitarist and other lead vocalist. 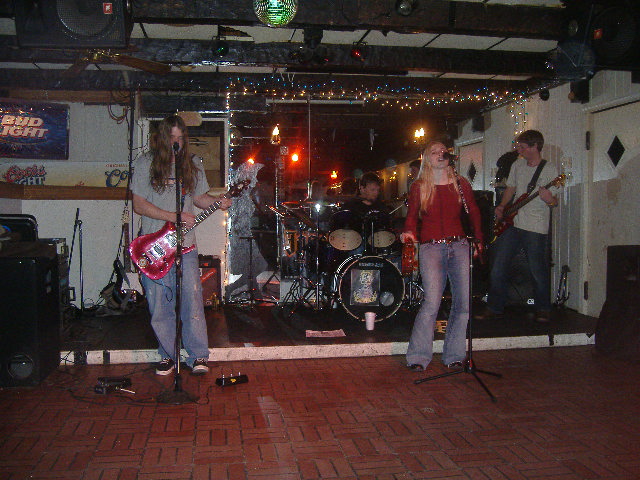 Here’s the full band shot of Semiblind, the others are no slouches musically either. They really tore it up.

Now Saturday night these guys did quite a few covers, and only a handful of originals. Semiblind put their stamp on everything from The Doors to Janis Joplin to Tom Petty to the Rolling Stones to Nirvana and a lot in between. I really liked the covers, but it was a shame that they didn’t do a couple of their original songs they have on their Myspace site, particularly “Ocean Meets The Sky.”

That omission was one of two things that bummed me out about Saturday night at Coyote’s, with the other being such a small crowd. These guys and gal deserve better! I suppose part of that’s a function of Seaford not being a college town as opposed to Salisbury.

But they’ll keep on playing as Semiblind has plenty of shows lined up for the next couple months. Take the time and check them out!

After a bit of a hiatus over the holidays, the local music scene is cranking up again.

This coming weekend there’s four good bands in three different area venues (that I’m aware of.) In Salisbury, the Cactus Club has Barking Crickets on Friday night and Halflink on Saturday night, plus Island Way features All Down But Nine on Saturday. Up in Seaford at Coyote’s it’s Semiblind playing the tunes. (I’ve linked to all of these bands under “Local band links.” Pretty smart, huh?) I think I know which one I’ll go to, but all would be good choices.

Then the following weekend Halflink is up the road in Delmar at a club called Memories. (That’s one club I haven’t made it to yet, at least I know where it’s at – right on old Route 13.) But Brew River is hosting the DelmarvaNightLife.com 2nd Anniversary party with 10 bands on 2 stages and that starts at 9:00.

At the Main Bar it will be Nate Clendenen, Barking Crickets, The Making, Lower Class Citizens, and Hot Box. On the River side the order goes Lime Green, Another Vicious Circle, Project Sideways, Falling From Failure, and Hard$ell.

I think I’m going to add the local venues to my band links as well, because having a website is a damn good way to get the word out on who’s playing – IF someone keeps up the website! Cactus Club does a good job on that, and the main DNL site is decent.

I do have to commend our local clubs though. For a city the size of Salisbury, they have quite a few places to see good bands. Where I’m from a lot of the bars preferred to have cover bands or DJ’s and not many places hosted original music. That also extends to a couple of the local radio stations that play a lot of local music as well – X106.9 and Ocean 98 both do quite a bit to promote these local bands. It beats the hell out of playing Nickelback for the 3 millionth time. (I like Nickelback as much as the next guy, but they do get overplayed!)

So I’m looking forward to enjoying some of the local talent over the next couple weekends. Hope the monoblogue readers will join me!

This is one of those times you wish events were more spread out over the calendar. There’s not one but TWO large local band shows tonight up in Seaford and over in OC.

In Seaford at Coyote’s the lineup for the “Slower Lower Christmas” is as follows:

Crookedfinger, Third Time Around, Red Number 40, Trip to Hollow, Pirate Radio, and Semiblind. I believe all but Pirate Radio hail from the First State so Seaford is the capital of their music scene for one night.

That show starts at 6:00 and admission is either $5 or three non-perishable food items (for the Food Bank of Delaware.) Coyote’s is located right off the corner of Stein Highway (SR 20) and Atlanta Road. I know right where it is because I bowl at Seaford Lanes next door.

The other show begins at 7:00 at the Sandbar in OC (33rd and Coastal Highway). There’s 9 bands for this one but I don’t have the info about admission cost. The “X106.9 Christmas Cranker” has Falling From Failure, Pirate Radio (doing both venues), The Sophies, Plunge, 7 Days Torn, Agents of the Sun, Havok in Hollywood, Hard$ell, and headlining the gig is Lennex. Should be a pretty packed house by that point.

Of the 14 bands in question, I’ve seen seven of them so I’ll have some new songs to check out regardless of where I go. But it should be fun regardless of venue, and certainly the one in Seaford is for a good cause.