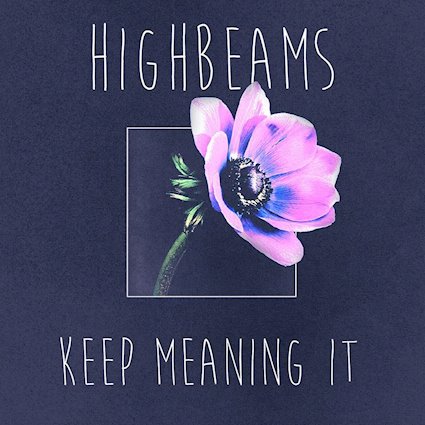 The first time I went through this very recent (as in it hit the streets this past Monday) release by the Georgia-based band of brothers called Highbeams, I sort of put it in the pile of, “okay, but meh…”

Luckily for them I listened to it a second time and there I found a little more of the magic that this band can put out when they place their mind to it. Sure, there are a couple of songs that seem on the fussy side, like Mess We Made or I Know A Place, but on the whole this isn’t a bad album if you’re into their sort of sound.

Highbeams is like a lot of other independent bands: they perch on the ledge that exists between folk, rock, country, Americana, and adult contemporary. Employing a heaping helping of harmony, Highbeams has developed a bit of a following in their native area and as I write they are expanding their reach, somewhere on the road between a show they played last night in Cleveland and tonight’s stop in Buffalo – it’s a mini-tour through the middle of the country to promote the new release. Someday is the lead single, which explains the video below.

The songs seem to be very honest, with some of them recorded in such a way that it sounds like they are right in your living room: for example, I could just picture them sitting on my couch doing the song Talking To Myself. Once upon a time I read that Fleetwood Mac and Steely Dan used to spend a jillion dollars to get their songs just so in the studio, but these guys probably spent whatever amount it took for the electricity to run the home studio and it’s just as effective.

If I were to have one main complaint about this compilation, I would say they need to stretch their musical wings just a bit. There are 12 songs on “Keep Meaning It,” but none of them are really distinctive – yes, they have the sound they want down, but maybe they need to toss in something that’s more bluegrass-influenced or maybe just a ballad. Perhaps Guilty and Window are the best attempts at breaking the mold, Guilty being the closest to a rock song and Window featuring a heavy dose of female lead, but they can’t quite escape the room.

So I moved a little bit off “meh…” but since it’s the time of year I begin to think about which albums I’ve listened to that would make my annual top 5 list, I can’t say this one is a real contender. You may wish to disagree, and to that end I encourage you to check out the Highbeams website and listen for yourself.