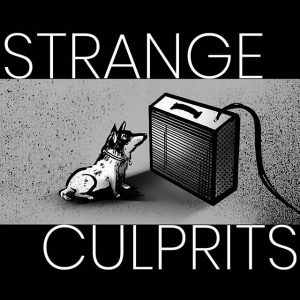 If there were an award for most appropriate group name, this one may be the winner. Indeed, there are some strange songs on this debut album from the Bay-based group Strange Culprits. (That’s San Francisco’s bay, not the Chesapeake.)

Described to me as “post-punk garage rockers” who state of themselves, “If the band were Canadian, the situation would be likened to musical Poutine,” I was expecting perhaps a little more of an edge. I suppose post-punk is a little more melodic than the original, because that’s what I found in a lot of these songs – most particularly Rootless and Bless The Harlot.

If you took the first trio of songs, though, you could imagine the punk roots are there: the repetitive, three-chord style isn’t lacking in Moonlight, When You’re Away, or Fleeting Moments, with the latter having a pretty cool bass line to go with it. On the flip side, the band branches out toward the end of the CD: was that a cello I heard toward the end of Fades Away? If it wasn’t a stupid guitar trick, it’s a fitting prelude to the chamber music opening for the final track, Concrete In The Rain.

Where this CD is lacking, however, is a somewhat mushy middle. Rootless and Bless The Harlot are okay songs as transitions of a sort, but lead singer Jason Buckingham can’t carry the feeling needed for songs like Let’s or Mija. Since there’s no female harmony on the album, we don’t know if Jason’s bassist wife Samantha (Sami) can sing, but seeing that she’s described a multi-instrumentalist who wanted to try the bass, maybe she can try a few vocals, too. The group just needs something in that department to make it better.

I have to give Strange Culprits credit for trying to extend out simple garage rock that always lent itself to short, two-minute bursts of aggression into more of a jam band feel. I think I would have liked it better with a different vocalist or perhaps songs better shaped to the limitations of his voice, which could come over time. (Concrete In The Rain comes out rather well, for example, but the other two cited are a bit brutal.)

But since I would be the last person in the congregation picked for a church choir because I can’t carry a tune in a bucket, maybe this is the opportunity (if you don’t mind the obnoxiousness of Spotify) to listen for yourself. After all, Strange Culprits do play around their home area and musically they have a pretty cool album with its guitar/bass interplay (you’d think the two were married or something) so it appears there’s hope for them yet. It could be the new stuff they’re doing (at least if you believe social media) works out better – they are definitely in the “wait and see” category.