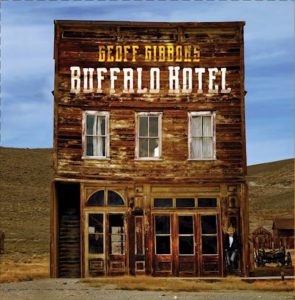 This full-length album by Vancouver-based singer-songwriter Geoff Gibbons makes for an interesting combination. While the imagery and sound evokes whiskey-soaked country, the lyrical content and tempo is more reminiscent of fine wine and romance. Gibbons may fancy himself a “country” artist, but I don’t think there is a song on here that would fall under the classification of the modern country that dominates the genre’s radio airwaves.

If anything, he makes his nod to the style that was in place a half-century ago. I thought Back To You was a song lifted directly from that era, for example. Back then the country industry seemed to be obsessed with erasing the line between country and pop music, and Geoff succeeds best with songs like Blinded By Tumbleweeds, City From The Stars, and Where Midnight Rolls – the latter giving me the thought of country meeting Springsteen for some unknown reason.

Another facet of “Buffalo Hotel” that makes it different is Geoff’s embrace of something different. While he doesn’t have a backing band to speak of, his use of “a tight community of first call studio musicians” and a backing trio of singers called The Sojourners to provide harmony here and there provides the interest, particularly where he steps off the country reservation for songs like the haunting melody of Lonesome Angel, The Other Side, and the gospel vibe of Me And Buffalo Bill. Gibbons also claims a love for bands like The Eagles, and that influence is strong on the lead track Ain’t Goin’ Back and Hard Hard Rain, the video to which is below.

But to me the best part of “Buffalo Hotel” is the storytelling. You actually need to listen to tracks like the hard-luck tale Carolina Bound, Pictures Of Adelaide, or the overly long Ever Get To Georgia. (One big difference between Gibbons and some of his musical influence: the songs are twice as long, and sometimes it’s too much.)

I don’t ever really see Geoff putting together a band and playing in the honky-tonks with his style of country. But if you like mature music with a dollop of country influence, this is a pretty good choice. As I often say, though, don’t take my word for it – listen for yourself.