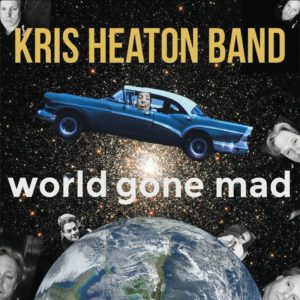 Kris Heaton has been around the world and back again, sporting the voice to prove it. Over the summer he put out this appealing album, at least if you like your music on the power-pop end of the musical world.

And a world gone mad is a theme of the bookend songs of the album, at least. Take the opener Who Let The Bullets Fly and the title track, which lament the state of the world, as does the penultimate track Way of the World. So what would he do about it? Listen to the last song, Better World, which exploits the old “if I were king for a day” theme.

But the eight songs in the middle generally come across as having a pop base with a variety of influences, mainly the synth rock that had its heyday in the late ’70s and early ’80s along with the power ballads that “graced” the end of the decade of Reagan and Rubik’s cubes. Particularly reminiscent of that time is the song I Want You, which is the heaviest and hardest of the lot, although the dabbling in a reggae-style sound that started in that era continues here with the track The Moment.

You can understand the sound of the record even more when you learn of Kris’s previous collaborations and incarnations. Originally a member of the band Control Group (a five-piece band not to be confused with a more recent trio out of New York called The Control Group), Kris played with them for nearly a decade before taking time off to raise his family. After that hiatus, Heaton apparently felt called back to the studio and has since put out a series of albums over the last eleven years, of which this is his seventh – and fifth after dropping the “Blues” from the Kris Heaton Blues Band name in 2009. (Heaton actually has a better voice for blues than rock, in my opinion. The description I read later on of “whiskey-soaked” seems most appropriate.)

A longtime collaboration with The Brandenberg State Symphony Orchestra continues on this album on the track Something New, although the group doesn’t get front cover credit as it did on 2016’s Heaton release called “Stand Up,” A previous one which perked up my ears, so to speak, was The Smithereens lead singer Pat Dinizio, who helped out on Heaton’s 2012 album “Law of the Jungle.” There’s some of that pop-alternative feel to this one as well.

There are two members credited for this album: Heaton and “long time bandmate” Ace Foster, who handles percussion, as well as a few guests not necessarily credited, such as the female vocalist on Better World. So these two, as well as another guitarist they keep for live performances, play a variety of shows and benefit performances around Connecticut, where Heaton calls home. (One staple is a regular event the KHB headlines called Hopefest, which had its twelfth incarnation earlier this year.)

Overall, I liked this one for the most part, although it would be interesting to hear these with a different singer. And here’s a little of the social commentary, which fortunately doesn’t clutter up the whole album regardless of how you feel on the issues.

Otherwise, I encourage you to do as I always tell you: listen for yourself – but be advised Spotify will sneak some ads in on you. That can be rectified by just buying the record if you really like it.