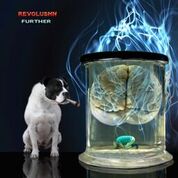 It’s a good thing I listen to the music first before I read the profile, because I would have judged this record differently based on the stage names and political persuasion of the participants in this San Francisco-based band.

What I actually listened to, though, was a band that really would have been at home in the 1970s. Take for example the opening track Dinosaurs, which begins like a acid trip, gets heavy, and ends on that same acid trip note. Listening about halfway through to the progression of chords I was transported back to that great album rock of a bygone era when people who weren’t into disco were treated to heavier stuff like Deep Purple or Blue Oyster Cult. The River also has that same vibe.

On the next track, Wierd Little Mind (not sure if the misspelling is intentional, but that’s how it’s listed) I began to wonder: how did they find so many strange notes and chords yet make the song go together in a halfway-coherent fashion? Things get a little more conventional on Man Who Knew Everything, but that transitions into the the dreamy You Will Go. It’s almost like rock on Quaaludes. It gets even a little more strange (and brassy) with Dog Gets High.

Again reverting back to reality, you get All Is As It Should Be before the hypnotic title track kicks in. The album wraps with a neat if slightly overmodulated song called Time + Travel = Time. This is definitely one you should listen for yourself before you judge. Or you can start by watching this:

So this is the band that doesn’t do things the conventional way. It makes for a bit of a challenging listen, but doggone it I enjoyed most of the songs, the first two in particular. In my mind’s eye I was taken back to my room in the early 80’s listening to my boom box on low to the deep cuts the local rock station would play at night. The music had that sort of feel to it.

But I didn’t think those bands were this strange. Revolushn is one of those bands that is strange, or perhaps one may call it unique. Either way, it’s worth a spin.