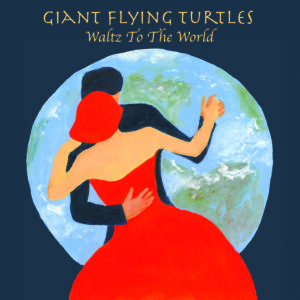 If you were in a record store and received this CD today as part of the new releases, the thing you may have a hard time doing is picking a category for placing this one. At times a folksy, country shuffle but a song or two later a blues-based rocker or jazzy adult contemporary number, you may just have to file it under new releases and hope for the best.

I’ve had pretty good luck over the years with bands and performers who hail from the Big Apple, and this Brooklyn-based quartet is no exception. “Waltz To The World” is the kind of album that, particularly in its first half-dozen numbers, careens perilously close to self-destruction on their songs only to patch it together and save the day. I don’t want to say it’s rough around the edges because the musicianship is very taut, but there were a few facets of this diamond in the rough that could have used more polish.

But from the opening bars of No Turning Back, an inspiring song a little reminiscent of U2, Giant Flying Turtles takes you in many different directions. They get a little bit funky with Stay Out Late, then veer off at a double-time sashay with The Devil And Me. Yeah, it’s like that through most of the first half of the record. The more conventional One Of A Kind sets the listener up for a slowdown with River Runs Dry, only to be rocked anew with Train Song, a track that would have been at home as a deep cut on a Blue Oyster Cult record. They were always a little bit quirky in song structure, and this was too.

As it turns out, a slightly different shift comes out in the next three songs: Three Shades of Blue is the quick-step song, but then things are turned down for Hold The Flag and, in an almost jarring whipsaw, back to a country-flavored turn with Banjo. My cynical favorite Good To Be Alive is the penultimate song on the record, which concludes with the title track. If variety is the spice of life, you get that quality in spades here.

I had thoughts of suggesting the next album be called “Box of Chocolates” because you never know what you’ll get, but after thinking about it a little you really do know what you will get because all the songs are good in their own way. Maybe they’re not your cup of tea in terms of style, but in terms of musicianship I had very few minor complaints.

I think this is the second time I had the happy accident of scheduling the review for the release date, so you can get this hot off the press. But as I always say, don’t take my word for it. Listen for yourself and if you like it be advised this is their second album and the first is there as well.