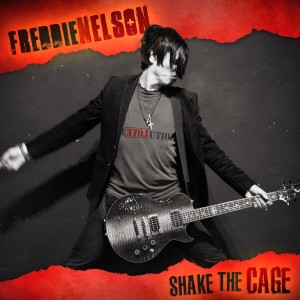 When I went to check out this just-released album from Pittsburgh-based rocker Freddie Nelson, for three minutes and 55 seconds I was transported back to 1987. Back then you could have taken a tape of the lead song on this CD, called Turn You On, to any A&R guy in the country worth his salt and he would have given you cash money to take you to the band’s next show.

There are a lot of great hooks like that on this 11-song set, a collection where Nelson plays everything but the drums, piano, and keyboards (but does handle the B3 organ.) Just take two back-to-back examples buried farther within the compilation: My Girl and Let You Go are both the catchy-type songs that made rock and roll what it was back in its heyday.

And if you have a lot of older rock albums, like I do, you realize there is a bit of a formula to put them together. Nelson stays fairly true to this successful way of doing things, putting in the bluesy ballad called The Show, the somewhat more mellow and acoustic song Monster In My Room, and another bluesier homage called Keep Running. It seemed like every good rock album had a few songs that departed from the norm in some little way, just to prove the artist could do it – almost as if he’s playing around with the listener, not taking this too, too seriously. After all, this is supposed to be fun here, isn’t it?

You see, this is where a highbrow music reviewer might say you can’t write a song called For Those Who Die and make it upbeat. They would whine that All Night Long exhibits too much of the alpha-male, testosterone-fueled bravado that was so wrong about hair metal, or that Light is a little too derivative of Freddie Mercury and Queen at its best, or that Never Fight Alone uses the trickery of sampling to ask the question, “Whatever happened to decent music?”

Well, guess what? I’m not that reviewer and I happen to think this IS very decent music, the way rock and roll is supposed to be. As Nelson noted in a statement accompanying the release, “The record is called Shake The Cage, because I feel that a lot of music has become one dimensional with tools such as pitch correction and formulated songwriting.  There is no substitute for hard work and honing your craft, and it’s time to challenge mediocrity.” Damn straight it is.

This is the latest video from the album, a song called Hey Doll, which leads me to one more observation.

Just listening to the arrangement and the lyrics, I would make a bet that if you worked in a banjo, changed the key, and had someone like Luke Bryan sing it, this song would sell by the truckload. To me it veers in a rockabilly, country-rock direction, and that’s not unusual for someone based out of that region.

So I think my friends and neighbors should get over their animus about all things Pittsburgh (aside from Buxy’s in Ocean City) and check it out – but don’t take my word for it, go listen for yourself.