Because I did a lot of explanation before introducing my April position player and pitcher of the month, I think I’ll stay with the trend for May and do my impressions on the season so far.

As it stands, the Shorebirds are tracking to be about the team I thought they would be when I found out that three of the top four picks in last season’s draft would bypass Delmarva and jump straight from Aberdeen to Frederick: how would this team look with Cody Sedlock and Keegan Akin in the rotation and Austin Hays in center field? I’m not sure they would flip their current record that has them well under .500 and already all but eliminated from the first half title with a couple weeks to go, but we would be much less mediocre.

When I looked up those players who were slated to make the Delmarva starting lineup, I cringed at their offensive production. One of the few saving graces I thought we would have was the fact the plan for Dariel Alvarez was to have him pitch once or twice a week as he learned that aspect of the game but stay in touch with the offensive end as a DH a couple games a week also. It would have been like having a guy on rehab all year (and bear in mind Joey Rickard hit .300 in his brief rehab stint here.) Alvarez wasn’t a slouch at the plate for the Orioles in his time there, so that would have been an interesting couple days a week and/or weapon off the bench. Alas, Alvarez blew out his arm so we may never know how it would have worked out.

I thought we would have a reasonably decent pitching staff, but with the exception of my April Pitcher of the Month Alex Wells, the rotation has been roughed up for much of the season. Aside from Wells, none of the five rotation mainstays have an ERA under 4.10 or a WHIP under the league average of 1.27. (Lucas Humpal is right on that mark, though.) Even our closer has an ERA over 4. It’s just a team that seems to languish in the bottom half of the league in a number of categories, including the number of blue-chip prospects that are playing right now.

Earlier this week we also learned who our three representatives to the SAL All-Star Game will be, and to no one’s surprise my April players of the month are two of the three – Alex Wells will pitch for the Northern Division team while Jake Ring will be a starting outfielder. They’re joined by Chris Clare, who’s the utility infielder of the group. However, while all three of them had good months in May, none of them were selected as my two honorees.

Instead, I went with two players who had hot hands in May; in particular my position player. This player had a May batting average over 100 points higher than his April mark and his OPS surged from .608 in April to .908 for the month of May. Based on a stellar month in which he batted .303/4/15/.908 OPS I selected Preston Palmiero as my Position Player of the Month for May. 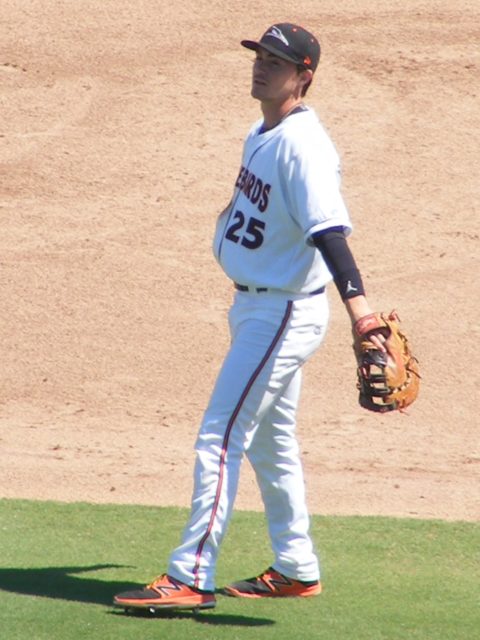 It’s obvious that Palmiero has a bit of a legacy to uphold as a member of the Orioles’ organization, as his father had seven of his twenty very productive major league seasons in a Baltimore uniform. (Unlike his older brother Patrick, who played for three seasons in the White Sox organization and now plays with the independent Atlantic League’s Southern Maryland Blue Crabs, Preston was born while his father was an Oriole.) The younger Palmiero was also the higher draft pick, taken in the 7th round last season by the Orioles. (Worth noting: his brother Patrick was drafted out of high school by the Pirates, but did not sign. The White Sox signed Patrick as a free agent after college, so Preston obviously drew a lot more interest as he attended North Carolina State.)

Preston put up reasonable numbers in 34 games last season with Aberdeen, hitting .258/0/18/,622 OPS. It wasn’t going to set the world on fire, but I’m certain that Palmiero was ticketed for Delmarva this season all along unless he really struggled or shined with the IronBirds last season. And April was a mighty struggle for Preston, but May was a month he righted the ship, aided by a lot of road games – Palmiero has an extreme split in favor of games away from Perdue Stadium thus far, where he’s hitting .289/6/18/.941 OPS compared to .216/1/11/.575 OPS at home. It’s almost like he tries too hard here, but since the Shorebirds had so few home games in May it helped Preston out. Surely the numbers will begin to balance out, but for now his average is about where it was for Aberdeen and the trend is in a good direction.

If Preston hadn’t come on with such a good month, I would have had no problem giving the honor to Jake Ring again. He had a fairly solid month of May to go with a stellar April, and that’s why he’ll be an All-Star. 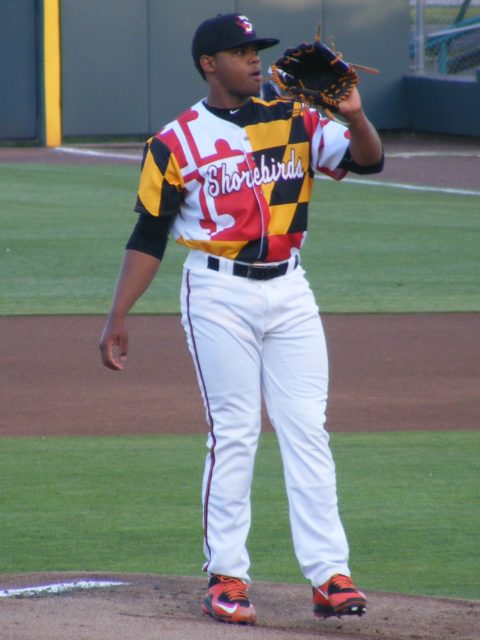 As for the May Pitcher of the Month, the seeds of his success began in April when he began a shutout streak that would take him deep into May and even through one spot appearance with the Frederick Keys. Francisco Jimenez had six consecutive shutout appearances that varied between 2 and 6 innings during the run, but for the month of May itself he was 2-0 with a 1.02 ERA and WHIP of 0.906. (Note that Baseball Reference does their splits among all levels, so this counts his one 3 2/3 inning appearance with Frederick. If you back out the Frederick innings the ERA goes up to 1.29 and WHIP to 0.929, which are still really, really good.)

In Francisco’s case, though, one could argue that he’s only come to master this level because he’s repeating it for the third time – he was he for the last few weeks of the 2015 season, all of 2016, and so far this season except for the quick dash to Frederick. But a point to consider is how many pitchers who succeed here struggle immediately on their promotion to the Keys, so that’s in Jimenez’s favor. Also. he’s had the flexibility to pitch as both a starter and reliever this year, although his background has been more geared toward a starting role.

Also doing well this past month on the bump and deserving mention are starting pitcher Matthias Dietz, who has bounced back to great extent after a terrible start, and relief pitcher Cody Dube. Both were top-10 picks last season so you would hope they have success at this level.

Finally, I wanted to point out that so far – with the exception of Wells, who is but 20 years old – all of my Shorebird of the Month selections are 22 years old, so they are right in line with expectations for excelling at this level. Once we reach the All-Star break, it will be interesting to see how the roster is shaken up as the team doesn’t appear to be a contender with the cast they have now. My June Shorebird of the Month selection will have a first half review as well.