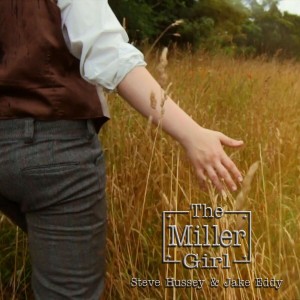 I’m certain that within the range of my website there are a number of people who enjoy the style of music variously referred to as bluegrass, Americana, or old-style country. Regardless of what they call it, they should be circling November 22 on their calendars because that is the date this release will hit the market. (The title track will come out two weeks beforehand as a single, although perhaps it’s some misfortune that it happens to be Election Day. People may not be thinking of music.)

Steve Hussey and Jake Eddy are musical collaborators who are a generation or so apart in age but seem to get along just fine musically. (Eddy is the younger of the two, as he is still in his teens.) But in listening to this album I noticed it had two somewhat distinctive “sides” to it: the front “side” of five songs seems to be more upbeat while the back half has more of a old-style country feel to it. There’s also more of a distinction between the opening five tracks: Little Shove comes across as a bouncier shuffle style, while Into the Ether seemed to me the most conventional country song. (It’s one I’m allowed to share as the album hasn’t dropped yet.) Chalk It Up is more of a sad, sweet ballad that didn’t seem quite as strong as the other songs.

There more of a humorous sense to Long Lost of Goodbyes, though, and Master Your Mind may be the closest song to what’s become known as modern country music (which is more like classic rock stylistically but played with conventional country instruments.) Its bass line gives the song away.

That song seems to serve as a transition point, because the last five songs have a much more common theme and sound to them – not quite repetitive, but definitely done in a similar vein. Yet while Looking For Love is a rather sad song, the whole mood changes on The Miller Girl, which Hussey (who wrote all the songs) describes as “a simple hymn of a tune about young love.” Who hasn’t felt a longing for the girl from “the next hill over” and anticipated a time when you would be riding the same school bus? You can almost see the progression of romance through the last three songs Better Day, I Pick You (which, in fact, Hussey wrote for his real-life wedding), and Sweet. All these songs have an old-style country and bluegrass feel to them, which is appropriate since both artists hail from West Virginia.

I often note that I try to avoid reading the descriptions and bios until after I listen through the album, so once I read Hussey’s idea behind it things made more perfect sense. Hussey noted that, “The album is laid out as a concept album. The opening tracks tell the story of a man who is lost, as highlighted by the first 3 songs. As the album progresses love sweeps in and by the last song…the listener and the protagonist arrive delivered.”

The other common theme in these ten songs is the outstanding interplay between instruments. This is a well-produced record, and as a testament to that I can tell you the playing on it really shines because the instruments are kept nicely distinctive. As I noted above, I can only share one song but feel free to listen to Into The Ether for yourself and be your own judge. (I think the title track would have been the better pick, but it is intended as the lead single.) My musical friends should really enjoy this record, and who knows? It’s not a long stretch to have the duo make its way to the East Coast to back up their work live so you can check them out in person.