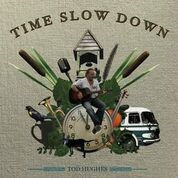 It’s been a bit of a drought for my review series, so it was nice to come back and do something that was original in the sense that it employed harmonies successfully, for the most part.

Tod Hughes is a musician from Calgary, Alberta, who claims to write “Real Music from the Heart!” I certainly can’t argue with the point, although there were a few points in the collection where the execution could have been improved. But the harmonies are the story on this album, beginning with the title track that sets the tone for the remainder. A similar track to Time Slow Down comes later in the album, as Real You And Me runs in the same vein. Worth Waiting For has that same nice female harmony with a more country-western sound – and by that I mean the classic stuff, not the homogenized rock with country instruments that plays on most country stations these days. Roots rock has some of the same influences, and it’s funny that Hughes mentions Johnny Cash in the song since Cash was considered to be rock-and-roll back in the day.

The ballad Darkness that Cries and finale Is It Really Fair also have that nice blend of voices, with the latter song being the most active and political of the nine songs on the set. Hughes points out that he does a number of shows “for the direct benefit of charity, where all proceeds go to support those in need. These charities have included education in developing countries, micro-finance and the recent refugee crisis in Syria.” Obviously that’s not everyone’s cup of tea, but musicians tend to be generous with their talent.

Other songs on the CD have their moments as well. One of a Kind has a unique rhythm to it, building to a crescendo that Hughes doesn’t quite have the voice for. Hughes shows his humorous side on the country-tinged Nothing Too Obscure as well as this track he made a video for, Drinking Coffee in a Hipster Place.

The video actually makes the track seem better, which is good. But the song I enjoyed the most was the middle song of the nine-song collection, the ode to the road Coming Home To You. It has a great bridge in the middle, but it did the best at evoking the optimistic mood of coming home – even if he did try and perhaps unnecessarily sing in a higher key toward the end.

Overall, this is not a bad vehicle to drive Tod’s career, establishing him further as a good regional artist. Apparently this album is getting a little bit of international play, though, so if you like that mix that occurs at the intersection between classic country and old-style rock that stresses all the instruments, not just bass and drums, you may get enjoyment from this too. As I often say: don’t just take my word for it, listen for yourself. “Time Slow Down” came out May 8 and even can be had in the old-school vinyl.