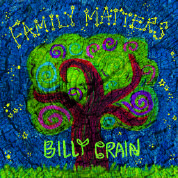 There is a story behind every song, and oftentimes the best songs are the ones that tell the best stories. As a musical veteran, Billy Crain has a lot of stories to tell and the album “Family Metters” is his latest rendition. When someone claims in their bio, “I’ve received royalty checks for as little as 15 cents and as much as $80,000,” you expect the tales to be good – and these are.

The nice thing is that Crain doesn’t have to reach far outside his family or faith to do so.

It’s interesting, though, that the guitar licks Billy made his living with aren’t the dominant feature of this album. Most of the songs are keyboard-driven, which could be explained by the fact this is truly a DIY effort: with the exception of the song Lucky Penny, the album is written, produced, mixed, and engineered by Crain, who did all the programming and instrumentation. (Lucky Penny, which is a song inspired by the Sandy Hook massacre, was co-written by Crain and his wife Sandy.) So perhaps the fact Crain and his wife have fostered and adopted two children after theirs grew up and moved away would explain the opening to the first song Dark House, which sounds like it was inspired by the children’s song This Old Man. We learn a little more about that renewed parenting in the title track later in the album.

Whether it’s the True Beauty of his wife, the brotherhood of his first band he describes in Road Warriors, or the mixed emotions of watching his friend take every day of his fight against cancer as a blessing in Glory (Jim’s Story), we get a backstage pass into Crain’s life. Everyone knows a mom like Hurricane Helen or someone like Crain describes in Wilder Things.

But some of the best inspiration comes at the end, when Crain praises the Christian life of Joe Parker and reveals what he learned from a black man. Being from Tennessee, that was a sore subject of Crain’s youth but we are all overcoming it. Finally, he deals with the stigma of unwed birth in 1928, back in the era such things were taboo. It’s not for us to be judgmental.

Another neat thing about Crain’s efforts is that he uses much of his gain for bettering others. “Family Matters” is Crain’s fourth solo effort, and he’s used what he’s made from some of the others to assist an orphanage in Haiti or babies with fetal alcohol syndrome in Tennessee. Some of the proceeds from this album helped to send a mission group from his church to Colombia. If royalty checks like those he described are still coming in, there’s no doubt he can use his talent to bless others.

On the whole, this album is full of good stories and upbeat music, but as always I invite you to listen for yourself. As we start to think about family and faith in this Saturday before Thanksgiving, I suspect you’ll be glad you did.