Each year on its anniversary I pause to think about where I was when I heard the terrible news that our country was under an attack, one which was the most brazen since Pearl Harbor. (Actually at first I thought it was a complete accident since my mind’s eye pictured a little Cessna-type plane hitting the World Trade Center – I received the word in a phone call.)

I’ve cited his work before, but photojournalist El Marco has a moving 9-11 tribute on his website. He titles it “Never Forget – Never Give In” and I’m among a shrinking number who haven’t forgotten or given in.

Obviously we knew this would happen, but a change in government from Republican to Democrat shifted the shape of this political football. Now the Democrats and Obama Administration seek to change the meaning of 9-11 from a day of remembrance (and the realization that we do have an enemy out there) to a day of service, presumably volunteering to help your fellow man.

But since those Islamic terrorists only seem to want to serve in helping themselves reach their version of nirvana with the 72 virgins while assisting as many Jews and others who happen to be standing in the way their entry into their Promised Land, we seem to be at loggerheads on what this day will really mean.

Despite the fact we defeated our enemy four years later, no one ever seriously thought of declaring December 7th a day of service. It was a day our parents and grandparents paused to reflect on events which galvanized our nation into jumping headlong into a war that had previously seemed far away and involved strangers in different lands.

Yet we face the same situation today with a different and lacking resolve. Perhaps it’s because the enemy isn’t as visible, but a shadowy subnational group based on religious belief rather than a traditional nation-state like Japan or Germany were in World War II. They follow rules of engagement known only to them and this fight is much more difficult for that reason.

Many argue, though, that the fight we seem to be shrinking from as the years removed from the terrible attack on the World Trade Center add up is a fight for our very civilization; that the values we hold dear and the values of radical Islam aren’t compatible and can’t become so. No compromise is possible – after all, what is the middle ground between life and death?

So on this eighth anniversary of 9-11, one where life is believed to have returned to a 9-10 outlook, I still haven’t forgiven or forgotten. And I doubt I ever will. 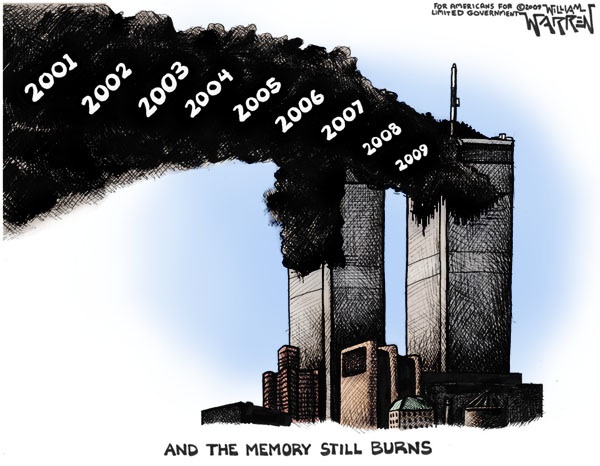