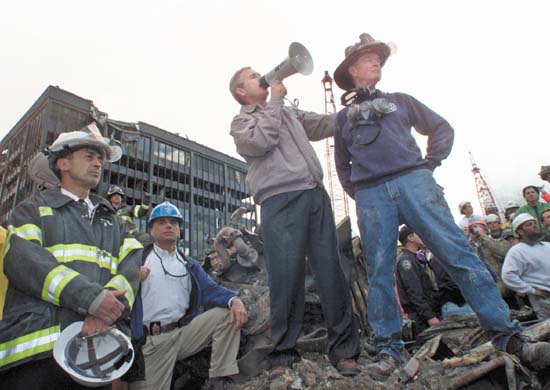 Practically everyone remembers where they were on this fateful day seven years ago. But I wanted to talk about something else that may have been destroyed when the Twin Towers collapsed and took nearly 3,000 lives with them, including many of New York City’s first responders.

Whether you thought his two terms were a success or a failure, this marks the final time we will commemorate the solemnity of 9/11 with George W. Bush as President. It was less than eight months into his term when this national tragedy occurred and obviously his Presidential priorities changed from the “compassionate conservatism” he espoused during the 2000 campaign to a security-first platform. Events since have forever marked his terms in office as ones where America was predominantly at war, and a strange war it’s been against an ememy with no flag, no borders, and just one overriding philosophy, that of radical Islam.

The Long War continues to be a hot topic of conversation, but there was a lot more that died in a philosophical manner after the response that nearly everyone wished for and welcomed once it happened finally came to fruition just over a year later. It didn’t take too long for many, particularly on the Left, to sour on the goals of the war and what they considered a detour into Iraq to oust Saddam Hussein from power and install a government elected by the citizens of Iraq. Domestically, we saw the reorganization of several agencies and bureaus under a newly-minted Department of Homeland Security and the passage of the PATRIOT Act. Unfortunately, the sheer amount of political capital President Bush had to expend to achieve these security goals came at the expense of some very good ideas he had domestically. I want to talk about just two of them this morning, as both of these ideas which were rejected by the hardened Democrats in Congress may have helped with two domestic situations we’re now faced with. While the human toll in the events which have transpired both here and abroad since the first plane struck the World Trade Center at this very hour seven years ago is staggering, future generations may see these failures as more important than the seven-plus years the Bush Administration was at war because of it.

One casualty of 9/11 was a bid for a more sensible energy policy. Back in 2005, the President was already leading the charge for more domestic energy, with proposals to open up more areas for drilling, make it easier to build more nuclear plants, and even use former military bases as areas where new oil refining capacity could be built. Given that we’re talking about many of these same issues as Campaign 2008 winds down, we’ve lost 3 1/2 years’ head start on much of this because obstructionist Democrats (and a few RINO’s) were scared of the fallout of following a President who was by then leading an unpopular war. (I happen to believe that some of the unpopularity was led on by a Goebbels-like refusal by the mainstream media to point out any successes in Iraq or Afghanistan.)

While energy independence is a large issue for the here and now, a centerpiece of President Bush’s second-term plans was a reform of the Social Security program that included allowing workers control over a portion of their contributions. Here was another domestic program where steps in the right direction were being proposed by President Bush; unfortunately his supply of political capital was all but exhausted from fighting the Long War. Democrats savaged his ideas, Republicans were loathe to step up and defend the program lest they be tarred with the same brush, and now we’re 3 1/2 years closer to a day of reckoning that could have been prolonged or even avoided had President Bush been able to show the same sort of leadership that President Reagan showed on his domestic programs.

While the patient took over seven years to succumb to his wounds from a day of infamy Americans of my generation should never forget, in many respects the presidency of George W. Bush will be the final casualty of 9/11. Of course, he was re-elected in 2004 but that was more of a case of not wishing to change leadership in a time of conflict and the Democrats putting up a candidate who was anti-war. Perhaps if a pro-defense Democrat like Senator Joe Lieberman had been the nominee we’d be discussing his re-election chances right now.

Since I’ve never met the man in person, I can’t say how the events of the last seven years have affected George W. Bush the person. My bet is that he’ll not be one of the longer-lived ex-Presidents as the stress of dealing with a nation at war has to have taken a toll on him, and it certainly spoiled his best-laid plans of making a difference for America.

One thought on “I’m still not forgetting or forgiving”