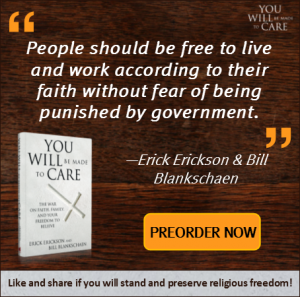 As I described a few weeks ago, I was one of a select group that was picked to read an advance manuscript of this book for reviewing purposes. Having read Erick Erickson’s work on a regular basis through RedState and his new website called The Resurgent, I thought I had a pretty good idea of what to expect in this book. Yet I was still intrigued by the direction that it went and by the emotions this book took me through as I read through it.

In its opening chapters, the book honestly made me quite angry. Knowing that Erickson is legally trained, it should not have been a surprise that he lays out the initial argument regarding the ongoing war on faith, family, and (particularly) freedom to believe by laying out case after case after trumped-up case where aggrieved members of the protected classes of today’s society work to rob those who proclaim their adherence of traditional, Biblical values of their livelihoods and reputations. While Erickson initially brings his main focus to the case of former Atlanta fire chief (and onetime Obama appointee) Kelvin Cochran, who was dismissed in early 2015 by the city of Atlanta based on a book he had written over a year earlier, he works briefly through dozens of other cases where believers have encountered unexpected consequences for running afoul of secular society.

Needless to say, my leftwing friends would read through this laundry list of incidents – which include the more famous examples of businesses like Sweet Cakes by Melissa, Ralph’s Thriftway, or Memories Pizza – and conclude that these entities were trampling on the “right” to, using these particular examples, seek to solicit a wedding cake created for their same-sex ceremony, purchase the “morning after” pill, or cater their same-sex wedding reception. To the activist plaintiffs in the former two cases it didn’t matter that each of these entitles were happy to suggest alternative arrangements or, in the case of Memories Pizza, was dealing with an entirely theoretical request: the plaintiffs believed these businesses were using the fig leaf of religious belief to deny “rights,” and sadly in most of these instances the heavy hand of government was putting a thumb on the scale against the business owners. These abuses of power, which appear throughout the first two-thirds of the book, should make anyone who reads this book angry.

Yet as Erickson explains, after going through several of these examples:

There is one key reason that those on the Left must force their beliefs on the rest of us. It’s really very simple. If they didn’t force their craziness on us, we would never embrace it. Deep down, they know that to be true. Progressive thinking doesn’t work in the real world.

They go on to try and figure out the progressive worldview, and at that point my anger turned more into a sense of pity. It’s really not all that hard to come to the realization that we are but sinners who fall short of the grace of God, but to do so means you actually have to admit to yourself that many of your acts are sinful and eventual repentance is necessary.

But Erickson makes the case in his book that pastors and churches are falling short in their calling as well, substituting symbolism for substance. For example:

There seems to a pattern here in Protestant circles: the more liberal a church becomes, the more it invests in all the trappings of the appearance of religion. The more it compromises the truth, the more it seems to try and compensate with impressive liturgies, pompous ceremony, and clerical garb. The compromisers seem to want you to get a feeling of spirituality from the way they conduct the service – not the words they use. It’s as if they want to be judged by the color of their robes and not the content of their sermons.

To Erickson, too many men of the cloth have come to avoid the discussion of sin as it relates to everyday life. Pastors, he argues, have become overly timid in their discussions so as not to scare away parishioners by appearing too judgmental or jeopardize the church’s tax-exempt status. While the modern church can be entertaining, he writes, it falls short on the enlightenment aspect. Through most of Christian history, he continues, we have been persecuted so why should we expect different today? In fact, Erick boldly states that our faith in America as a nation may be misplaced if it supersedes our faith in God. Ours may not be the Christian nation we grew up believing that it was.

Yet my anger at the outset turned to hope as I continued on. While it has the appearance of being a little bit self-serving – as Erickson’s recently-created website is dubbed The Resurgent – within the final chapters of You Will Be Made to Care he lays out ideas for a resurgence of the people: The Resurgent Community, The Resurgent Believer, The Resurgent Family, The Resurgent Church, and finally The Resurgent Citizen. I see these five chapters as the “how-to guide” of the book – like the erstwhile lawyer, local politician and campaigner he was, Erickson laid out the case for change, added the necessary backstory and history, then explained his platform and agenda for positive, worthwhile improvements to our state of being.

In introducing this segment of the book, Erickson writes that the nation is not about red vs. blue states or regions anymore. Instead:

I see us – the resistance to the suddenly dominant Spirit of the Age – as a group of conservatives and faith-filled people united against the forces of the Left. Sensing what is at stake in the conflict, many of us have found our voices and are willing to be bold, to become a resurgent people of free ideas, faith, and family.

The evolution of this book hit home for me because it reminded me of my own journey through faith and what it can lead us to believe. I’ve been pro-life for many years, but never really became as activist about it until I began regularly attending church. It’s also led me in the direction of bringing my cohort Cathy Keim on board as a relatively like-minded writer with many of the same goals in mind but a different and unique audience.

(This also affords me the opportunity to remind readers that Erickson has a co-author for this book – Bill Blankschaen seemed to be an excellent choice as a co-author given his history as a collaborator and pastor. While I write about Erick in the singular for the purposes of the review, I’m sure Erick would be the first to tell you the book is a joint effort.)

Yet the chapter on The Resurgent Community reminds me of something I wrote (to considerably less fanfare) a few years ago. After the introduction, I wrote about community in the respect that we should stop looking inward and do more to help our fellow man. While my perspective wasn’t overtly religious, the point Erickson made in this chapter made me think about that which I wrote a few years back but had contemplated long before that.

I also enjoyed the humanizing moment he shared in the book. Wrote Erickson:

If we know we need the fellowship of other believers, why do we seem to be so cloistered in our own homes? I don’t know about you, but one of the greatest barriers our family has to connecting with other believers is (a) very practical concern – a clean house. It sounds crazy when we think about it in the context of facing persecution for our faith, but the first thing people have to be willing to do to cultivate community is to stop worrying about how their home looks.

This light-hearted example aside, perhaps the thing I most took away from You Will Be Made to Care is Erickson’s conclusion that we are not alone. Despite these interesting times we live in, the advice to be a light in the darkness and be a happy warrior is timeless.

What I would encourage those who read my review to do is to (naturally) pre-order the book for yourself. (Like most new books, it already has a website and pre-ordering entitles you to some added perks.) Since it comes out next Monday (the 22nd) it will likely be in your hands next week. Read through it and then share it: loan it out to your friends, your pastors, your fellow worshipers and remind them they are not alone.

Even if they only read it and return it, I’m sure Erick and Bill won’t miss the dollar or two in their pockets if they know the information is being disseminated. There are a couple people on my personal list to share it with, so once I get my hard copy I’m doing the same.

It’s time for Christians to stop feeling sorry for ourselves or playing the victim. At my church we are reminded that the outside world is a missionary field, so if Erickson’s book helps you serve in that capacity there’s nothing wrong with enlisting his aid.

One thought on “Book review: You Will Be Made to Care: The War on Faith, Family, and Your Freedom to Believe by Erick Erickson and Bill Blankschaen”