This post was from September 14, 2009. Perhaps it could lead to a piece on my thoughts on where the TEA Party has gone since those heady, bring a quarter million or more people to a D.C. rally days. I will say that this rally was perhaps my favorite event to cover, that’s for sure. So take a few moments to remember.

Last night I did the crowd shots for the disbelievers. Today I’ll get to the more meaty parts of the rally.

But it may not be a bad idea for me to do this part chronologically as well. There were a lot of moments which cry out for comment and today is a good time to sit back and reflect on what the day meant to me and a million others like me – not to mention the thousands who participated in smaller rallies across the country and/or met the TEA Party Express tour bus in various parts of the country.

Since we walked from Union Station, where the bus dropped us off, directly to the Capitol (we were late enough that the march had already began) we walked by the Teamsters national headquarters. (Don’t forget I embed captions too.)

I know this isn’t SEIU headquarters, but card check performed by the same type of people who think nothing of beating up health care protesters doesn’t fly – keep the secret ballot as it is. So what if unions only win about 2/3 of the time.

The first attention-grabber I ran across at the rally had his own message. 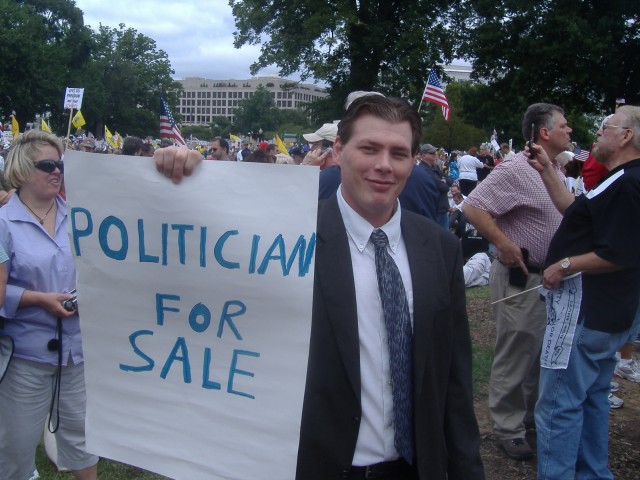 While this woman wasn’t dressed to the nines, the sign she held up intrigued me so she’ll be a featured player.

Also, she had on two great buttons: “I’d rather be waterboarding” and “America: Not arrogant, just awesome”. Winners in my book.

This lady was sitting back deeper in the crowd, so she couldn’t see the stage but she could be seen.

One complaint I have about the setup was there were way too few facilities. I counted 60 portapotties for a million or so people. Disregarding potty parity, there should have been hundreds if I recall building code correctly – then again, even the organizers only predicted 75,000 to show up. This was stuck on a portapotty door and was worth a chuckle and a picture.

Once I finally got through the line, I wandered some more. This was when the main event got started so I listened to a couple speakers. I didn’t get the name of the guy who said this but he said, “Three days ago the President called us out…three days later, here we are!”

Obviously that got a big roar from the crowd, as did Andrew Moylan of the National Taxpayers Union noting, “Hell hath no fury like a taxpayer ignored.” The crowd noise could be quite loud at times but since we were scattered about in a large area (as opposed to a stadium) it wasn’t deafening. Certainly it was great to hear as we walked up.

Crowd noise didn’t deter this woman from doing her job. 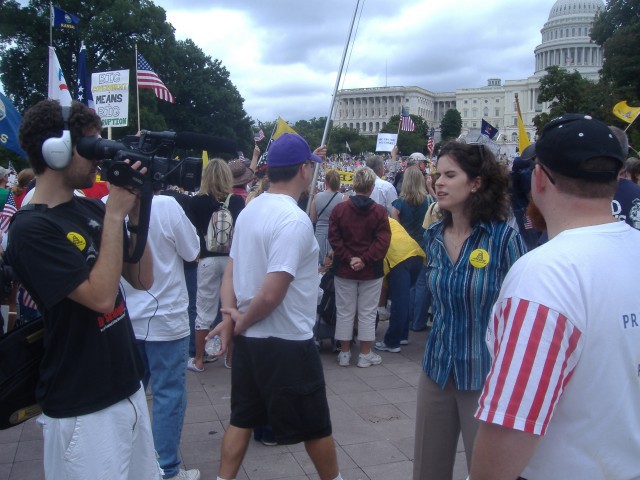 Since I have the web address I’ll have to see if the interview I did made the cut. If so I’ll put it up for Friday Night Videos. (Nice tease, huh?)

This may be my favorite picture from the event in an artistic sense.

In a certain way it’s very symbolic of our cause, sort of reminiscent of Paul Revere’s ride. Speaking of riding, there were others who arrived in the same manner we did. 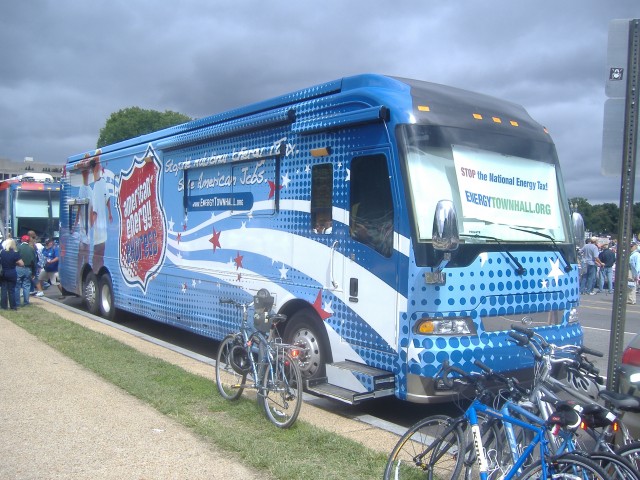 I presume they had their people moving through the crowd exhorting support of a pro-energy position. But another bus was met with much more derision. 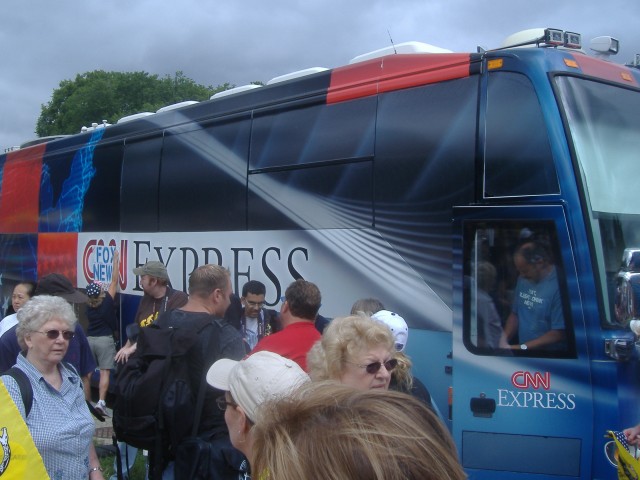 Returning to a space in view of the stage, I took a long-range shot of the TEA Party Express group, represented by a previous monoblogue interviewee, Deborah Johns. 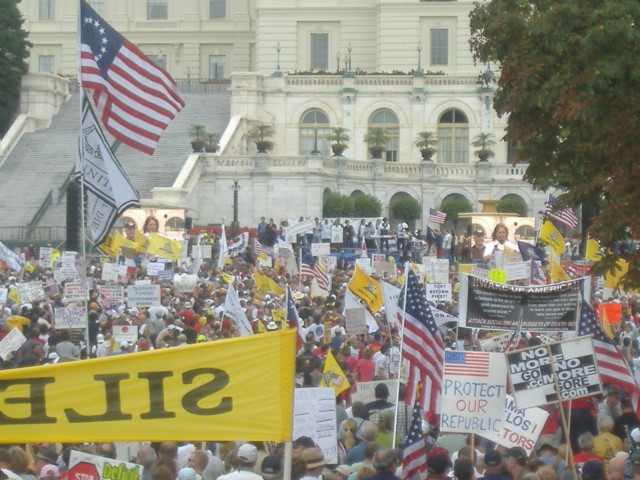 I’m working on securing another interview with Deborah this week. They also brought the event organizers on stage to close the show. 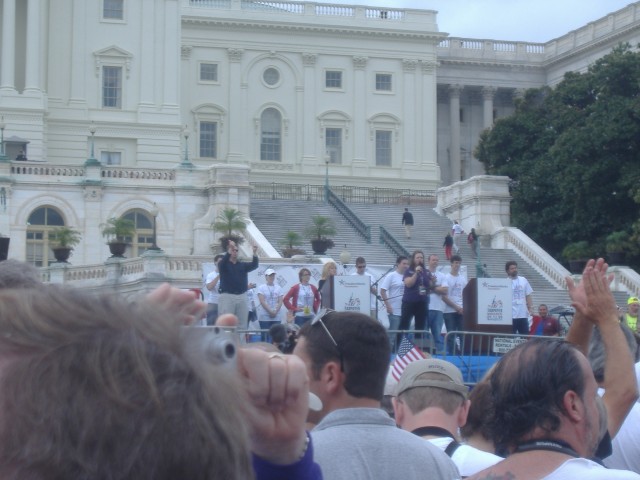 But the pictures aren’t done. I have more fun stuff to discuss from the return to Union Station, like this guy. 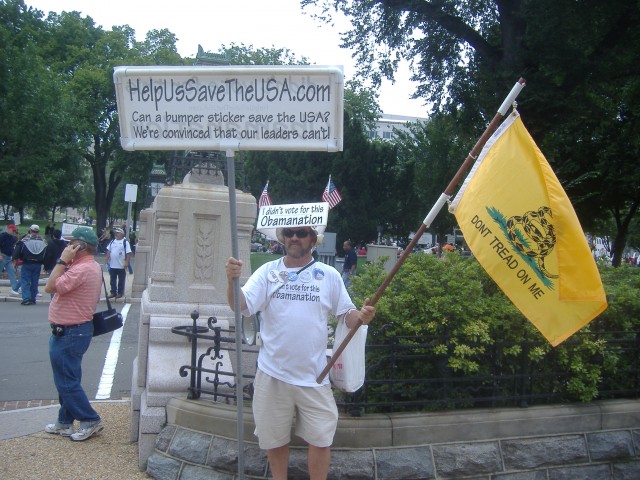 The same goes for this truck. I did not Google “Mark the Patriot” but maybe sometime I will. 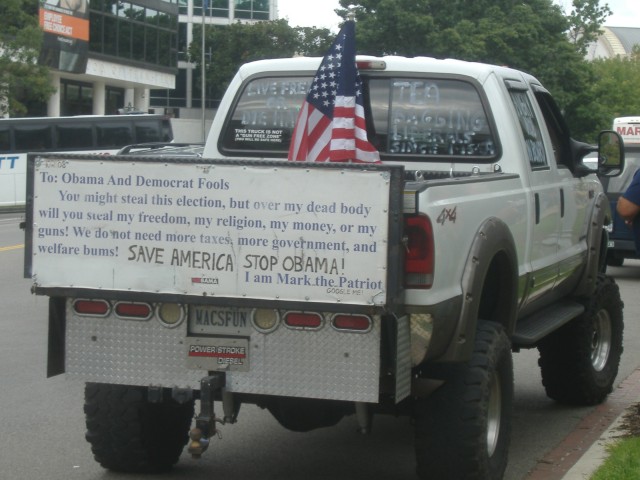 Arriving at Union Station, there were still protestors worth checking out. I suspect a lot of Congressmen may get a pink slip next year. 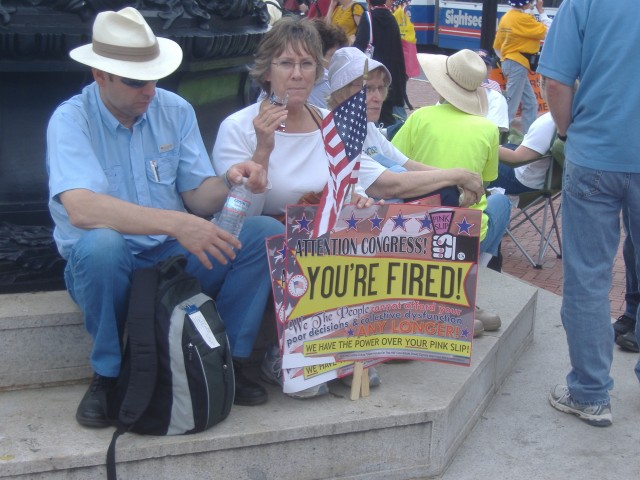 I saw buses there from points up and down the mid-Atlantic: Virginia, Maryland, Delaware, New Jersey, New York, Pennsylvania, North Carolina, and South Carolina were represented. I even was in proximity with a minor celebrity: Rev. James David Manning, the Louisiana preacher best known for calling President Obama a “long-legged mack daddy.” 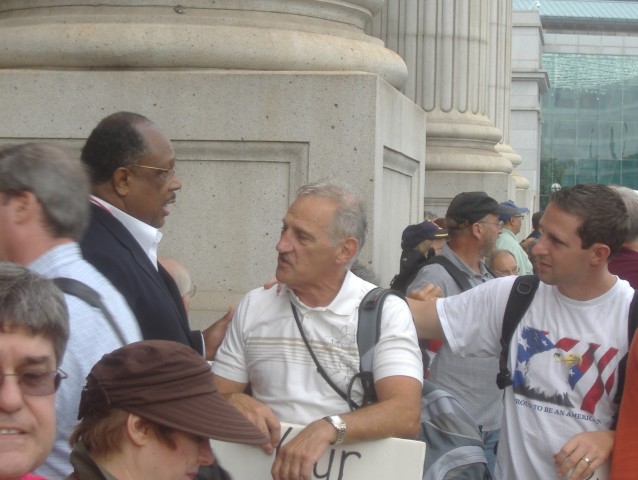 Between two posts I have 24 pictures, plus another 14 on my Facebook page. But there’s no way I can create the full flavor of the event – I guess you just had to be there.

Hopefully this won’t be the last event the 9-12 Coalition conducts, but most of us know that this isn’t a climax, just a beginning. The change we seek isn’t one that occurs overnight and doesn’t stop even if we throw out Congress and Obama next time around. Vigilance is forever, and that’s the first lesson we all need to learn.