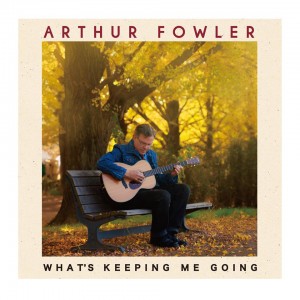 If life had gone according to plan, this review would have coincided with the February 14 release date of Arthur Fowler’s latest album. But it didn’t, so as I was being snowed in earlier this week I finally took an initial listen to the Tokyo-based and Milwaukee-born singer and songwriter whose style is described as “acid folk.”

Admittedly, his album’s been out over a year now, but like another CD I recently reviewed by Dave Plaehn, Fowler’s “What’s Keeping Me Going” has been a long time in the making as Fowler has a career outside music. As I said in reviewing Plaehn’s work, though, artistry delayed is not artistry denied and Fowler plays regularly around the Tokyo area with occasional gigs back in his home region in the States.

Yet rather than folk music, I detected more of a jazz influence on this release; in fact it’s one of the more variable collections I’ve heard in awhile. After all, how many artists these days place two full-length instrumentals on their playlists? Fowler takes the middle and final tracks of his 11-song release and puts up the well-played and improvisational jazzy instrumentals Twilight Breeze and On The Verge.

The album starts out, though, with a mellow acoustic title track which invokes a natural setting before breaking out the harmonica and harmonies on the most accessible track, Please Try. Its lyrical stylings should make this a live favorite, as should the next song called Love The Music. I was impressed with its simplicity and the idea of the enjoyment of playing all night is well-expressed in the song.

These three opening songs have already exhibited a good range of influences, but Fowler’s not done yet. He puts his stamp on the psychedelic Jimi Hendrix song Room Full Of Mirrors by adding accordion to the repertoire. Obviously Fowler fits the song to his own style, but the touch of accordion makes it a unique version. On the other hand, the version of Neil Young’s For The Turnstiles that comes later is a little more true to the original.

Yet the selection of these more or less forgotten covers (as opposed to the hits by both men) tells me that Fowler likes a good song regardless of the public perception and acceptance of it upon original release.

Once we get through the solid classical-style guitar-based ballad of HU and the aforementioned Twilight Breeze, you come to a track called The New York Song that almost sounds like a continuation of Twilight Breeze until it livens up and adds in the element of call-and-response. But I had to look in the first few seconds of The New York Song to make sure I didn’t inadvertently repeat the previous song.

Perhaps the best song on the album is one buried toward the back end. I enjoyed the more upbeat Here I Am, which led into the Neil Young cover. It also brings me to the unique and slow-developing penultimate song called Splash, which at times seemed to me like it belonged in a spaghetti western. There was just something about it that evoked that thought in me.

I generally close my reviews by encouraging readers to listen for themselves; after all, each one has different tastes and what I like may not tickle your fancy. In this case, though, I was given access to a private playlist – but you can listen to five of the tracks on Fowler’s public Soundcloud page. These hit a lot of the highlights so if you think the quintet is worthy you’ll probably like the whole enchilada.