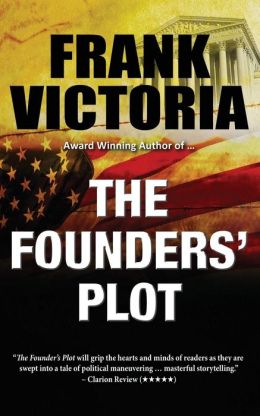 Here at my site I have, on rare occasions, reviewed a non-fiction book which interests me from a political angle. For the first time, though, I’m today reviewing a fictional novel – but it’s one which could, more or less, be ripped from current headlines.

In The Founder’s Plot, at a time not-so-far removed from the present, Michael DiGrasso is elected as governor with the promise to get tough on illegal immigration. The one aspect of the story which is a little unbelievable is the part about being elected in California on that particular platform, although I suppose those few taxpaying citizens who remain in the Golden State could be motivated enough to do such a thing as conditions in the state continue to deteriorate from an onslaught of illegal immigrants. We have seen evidence of this outrage recently in the small town of Murrieta, California.

Regardless, DiGrasso is elected and immediately puts his plan into action. The secondary storyline of The Founder’s Plot shrewdly looks at the situation through the eyes of Carlos and Marisol Costellano, illegal immigrants who had made a home in America despite their lack of legal status. Over several years, Carlos had worked his way through a variety of jobs to the point of being a skilled laborer, investing his earnings into the purchase of the duplex where his family lived. Also residing in the duplex are the Castellanos’ good friends Julio and Carmella Perez, whose grown children also work their way into the story.

Yet it’s not just characterization, as Victoria puts a lot of work into the book’s details. While he glosses past the machinations of putting the tough immigration law into place, he doesn’t skimp on the political dealings which occur after the law takes effect and it becomes clear that DiGrasso means business. Nor are we spared the backstory explaining DiGrasso’s dogged determination and desire to make a stand against where he believes America has veered from the path intended by those who created our nation. In that regard, he gets assistance from some powerful friends.

On the flip side, Victoria adroitly creates a setting where we follow Carlos into an underworld of selling forged documents to fellow illegal immigrants as he desperately tries to make additional money for his growing family. While DiGrasso is only a man Carlos sees in the news, he senses DiGrasso is serious about enforcing the new immigration law and has to consider whether to pull up stakes and move to another state or even return to Mexico after years away.

The book’s seminal event is perhaps its most realistic prospect: a legal challenge to DiGrasso’s immigration law survives to the Supreme Court, which rules that it goes too far in its restrictions. The governor’s open defiance of the Court’s decision leads to protests and calls for his impeachment by California opposition leaders. Unsurprisingly, Victoria relates how some in DiGrasso’s own party are too weak-willed or blinded by political opportunism to stand up for a state’s right to enforce its own laws.

The accurate detail continues in the depiction of DiGrasso’s dealings with a skeptical, questioning press around the country. The harsh questioning from penny-ante television “legal experts” is expertly dissected by DiGrasso, whose confident answers – ones which cite well the Founders’ original intent – make you wish DiGrasso was a real governor putting these personalities in their place.

As the book continues on, both protagonists wrestle with a number of moral dilemmas. Castellanos finds he’s a good salesman of the forged documents, but keeping that job secret from his wife and staying one step ahead of the law takes its toll – yet to stop the activity exposes him to the prospect of additional harm. Similar family issues also leave DiGrasso wavering on whether to continue his defiant stance or find compromise with those who claim the law is too difficult on immigrant families simply searching for a better life.

I read The Founder’s Plot over several sittings, but it was crafted in such a way that getting deeper into it made it harder to put down. Running at 341 pages, Victoria puts together a gripping tale full of twists and turns which can’t be anticipated, leaving the reader trying to guess how the story would come out. The ending turns out to involve the President and may come as a pleasant surprise given the caliber of politicians and entities involved.

While Victoria has a degree in journalism and experience in the writing field as a longtime newsletter writer and editor, it’s a giant leap to writing fiction in a believable manner. Perhaps a pickier review would speak more to the lack of development of certain minor characters and subplots which could have been excised from the book, but overall I found The Founder’s Plot to be an excellent political thriller – as I said, the farther I got into it, the harder time I had putting it down. Those who like their fiction taken from the events of today would be well-served to pick up and read Victoria’s debut fictional effort.

A slightly different version of this is crossposted at Watchdog Wire.